The garden in my back yard has an abundance of rudbeckia, cosmoses, and swamp milkweed. For a couple of weeks in September 2019 it also allowed me to produce an abundance of photos of a praying mantis.

During the PM’s stay in the garden my grandson, who was three at the time, and I had fun checking out the PM on almost a daily basis. We’d play a game of who could first spot PM hidden in the thick cluster of orange sulphur cosmoses.

So first the praying mantis in a world of orange sulphur cosmos. 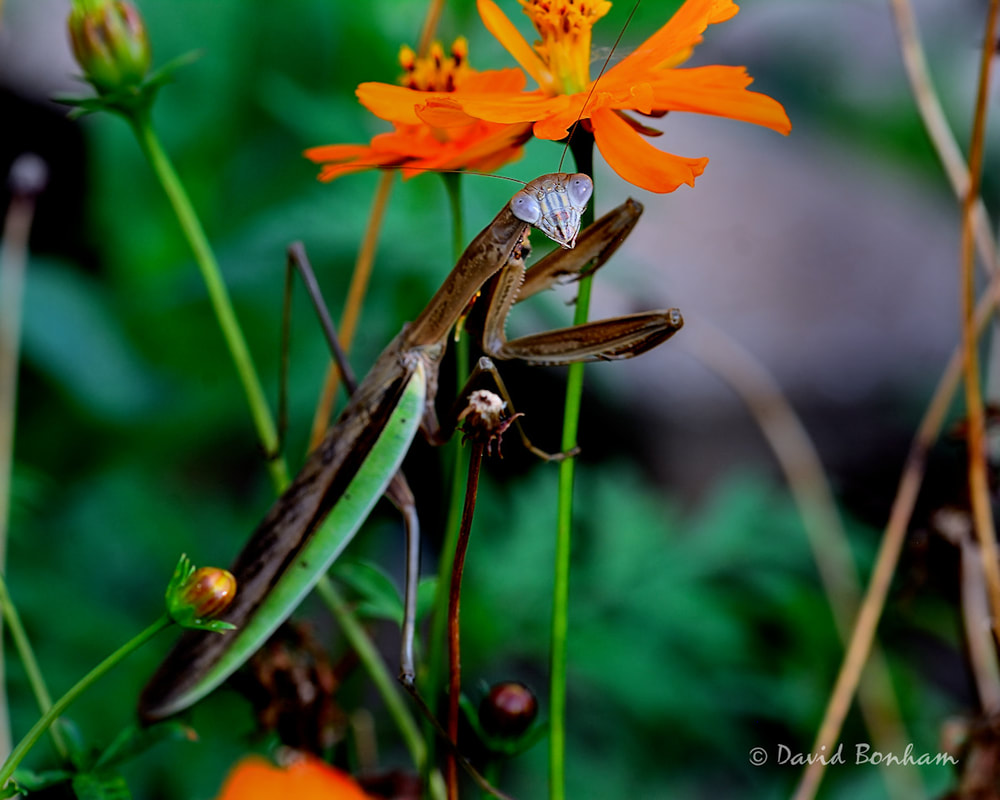 I’m not positive of when I photographed my first praying mantis but I think it was maybe about ten years ago at our old house. The mantis was (unlike this one)  all green and perfectly camouflaged in a sea of columbine plants. It’s head was remarkably similar the the shape and color of the columbine leaves. 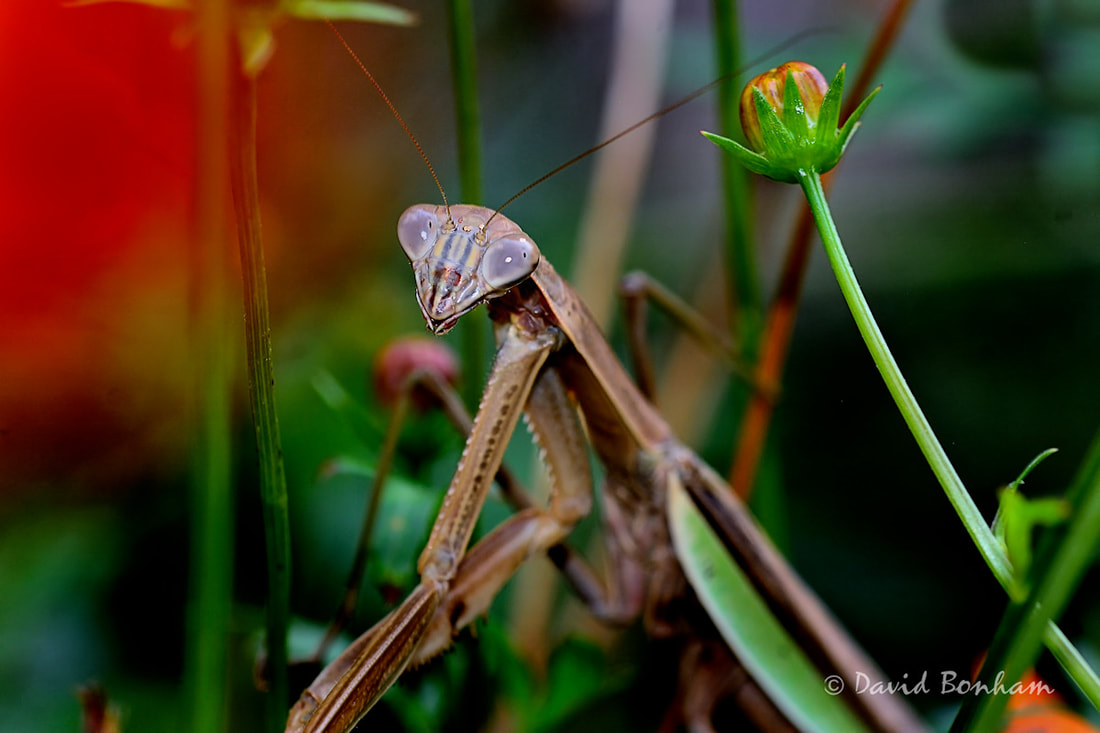 It was a very large mantis (maybe four inches long, similar to this PM) and had left the garden to perched itself on the low brick wall that bordered the back of the garden. This was pre-Nikon days and my camera was a Panasonic Lumix DMC-ZS7. The DMC-ZS7 is a small shirt pocket camera (albeit heavy) with a super zoom (600mm effective if I remember correctly) and an excellent macro mode. 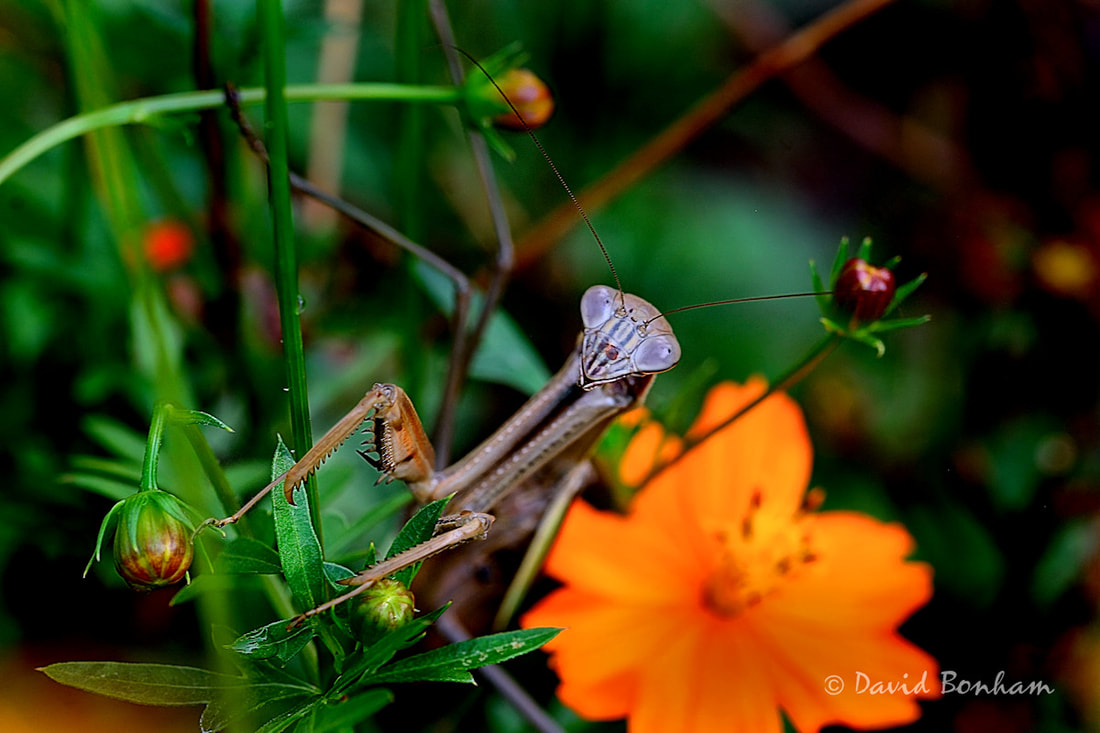 The garden was in our side yard that faced a street that dead ended at the back of our yard.  We parked our cars on that street most of the time and as I was photographing (or macro videoing, I forget which I was doing at the time) my wife pulled up the street and parked a few feet to the right of my view on the view screen.  She got out of the car and closed the door.  She didn’t slam it but the closing was loud enough that I could hear it.  That big old green praying mantis heard it too. 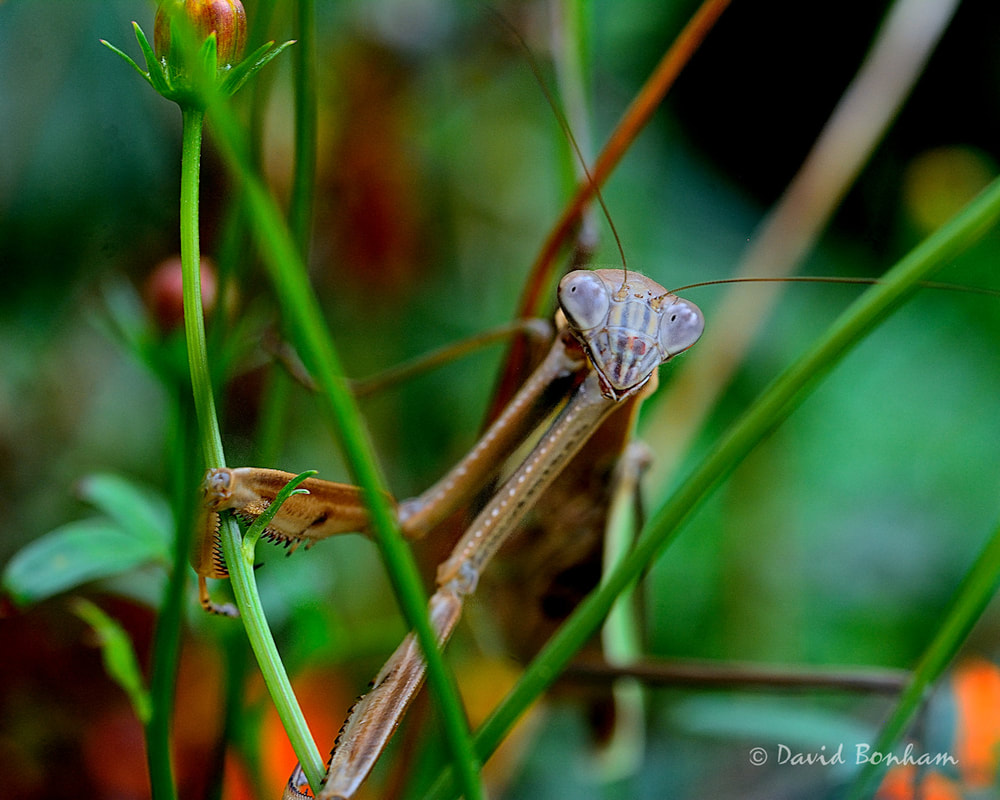 Watching the view screen on my camera, I was shocked, almost frightened, when I heard the door close and saw the mantis abruptly turn his head and look over his should, and then turn his head a little more, to see what the sound was.  “Whoa!”  “Bugs don’t do that”, I said to myself.  Well … it turns out praying mantises can, and do, up to 270 degrees.  At best, we can turn our heads 90 degrees. 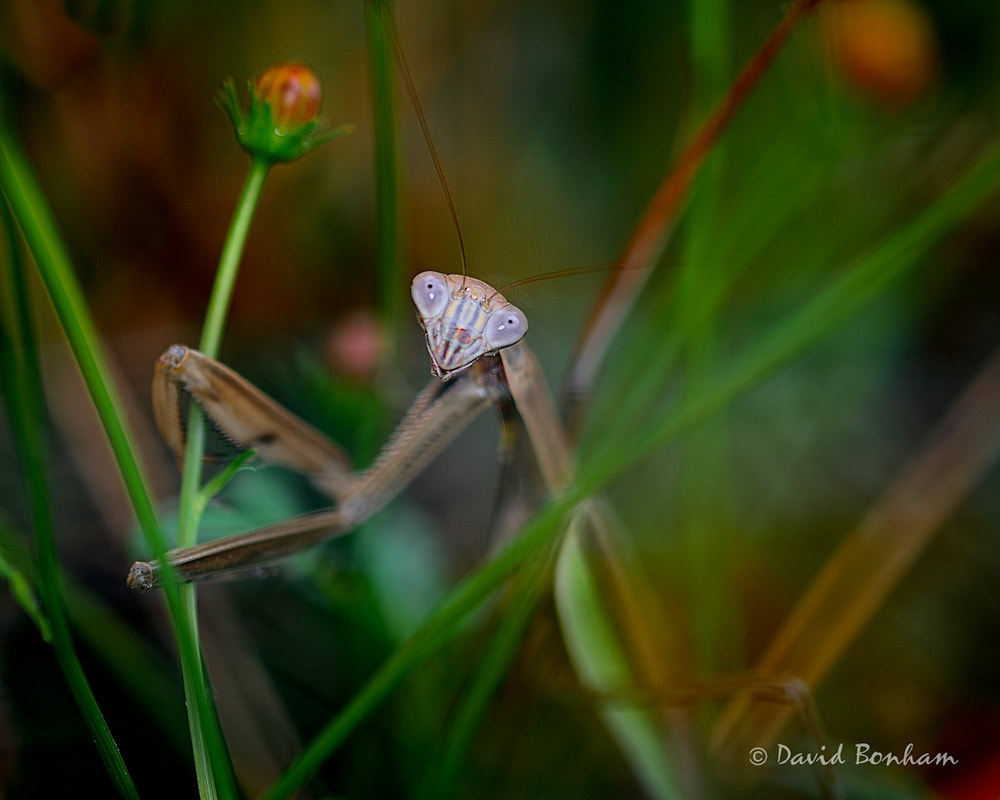 And now a few flowers as promised in this post’s title.  First a orange sulphur cosmos 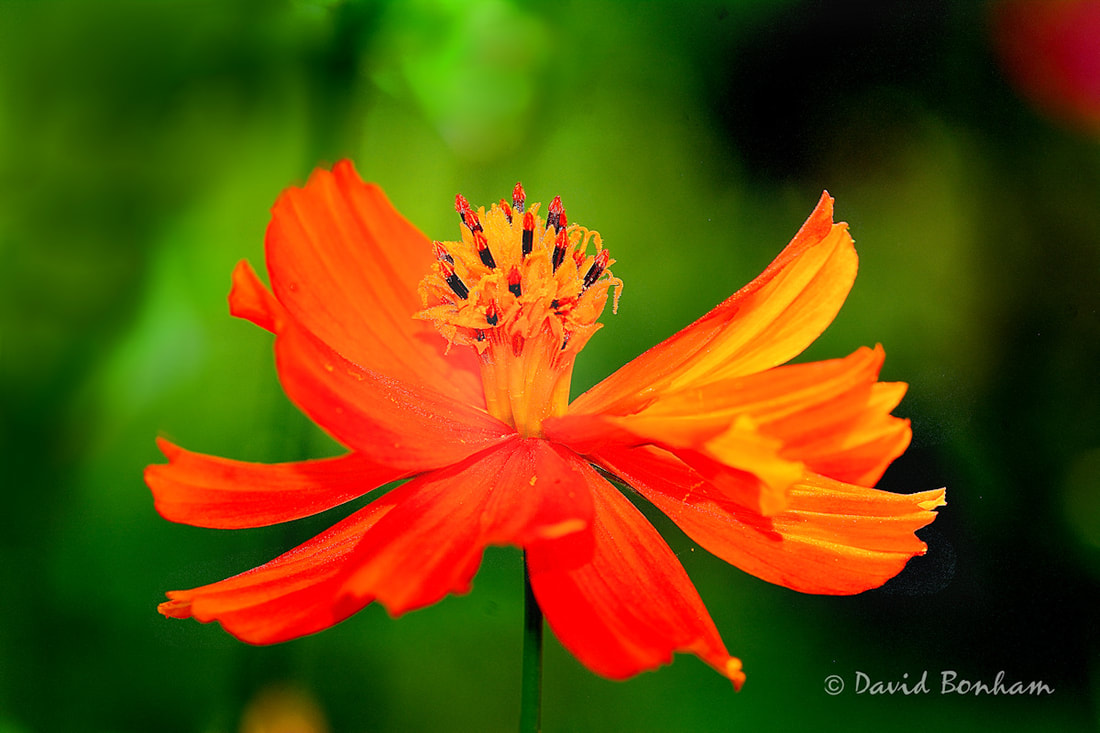 followed by a pink cosmos, 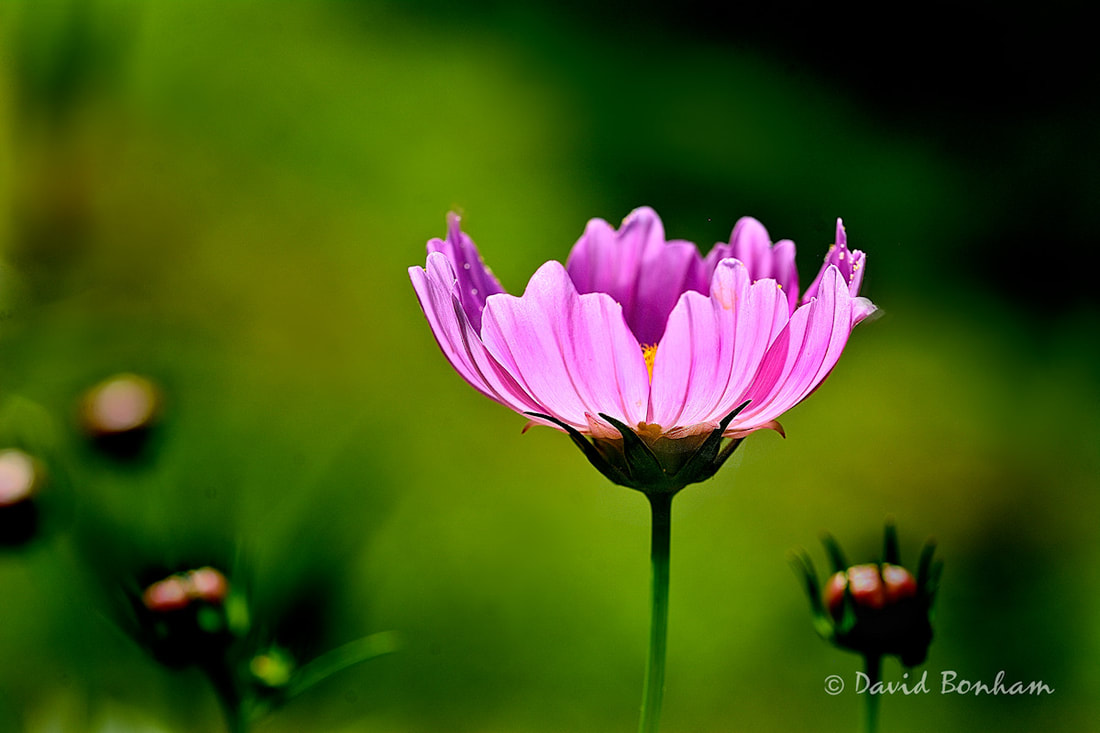 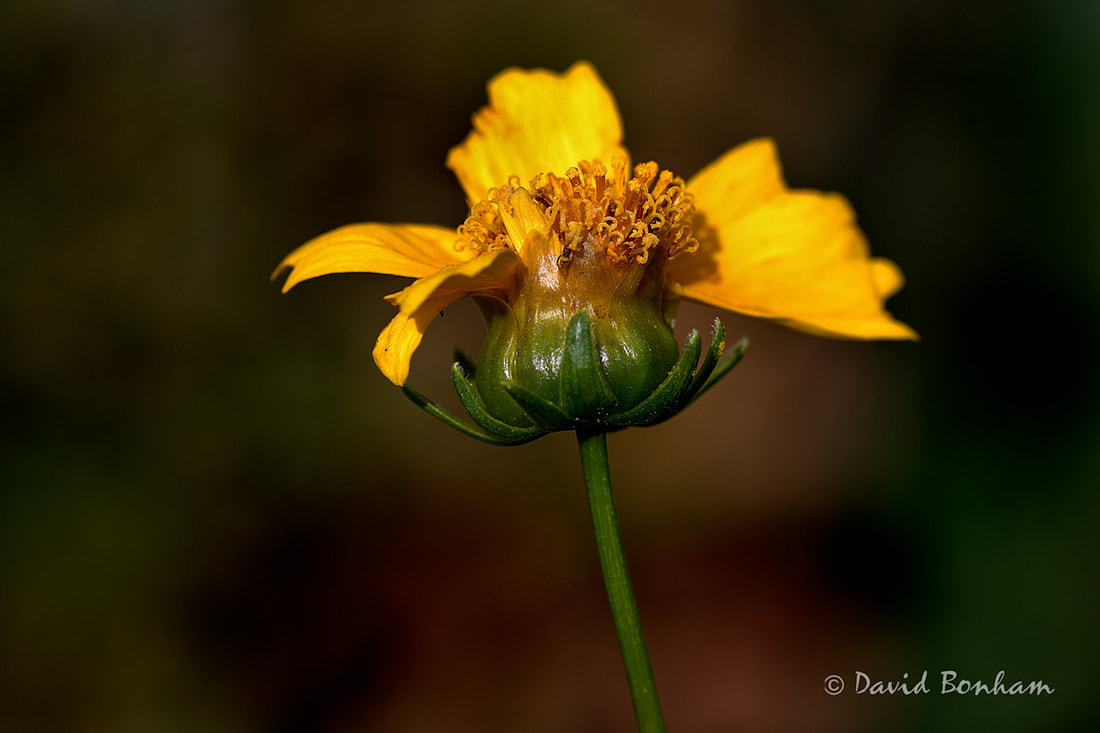 P.S. Quite a few more photos of this praying mantis to come in future posts and here is a link to a rather shaky video clip of my very first praying mantis encounter years ago.

6 thoughts on “A Praying Mantis and Few Flowers”