One of our local garden clubs maintains a small butterfly garden (small garden; not butterflies) about a mile from my house.  It makes for a nice two mile walk with a rest for photography halfway through the walk.  On this particular day I was walking on the small mulch trail (small trail; not mulch) when I saw something very strange that I had never seen in the garden before.

Growing out of the mulch were a couple of dozen strange looking and brightly colored objects.  I remembered seeing something similar in the woods behind my house when I was a kid.  I knew they were mushrooms but didn’t remember what kind.  Based on their distinctive look it wasn’t hard to identify them:  stinkhorns.

The individuals in this group of stinkhorns ranged from about five to six inches tall but they can get as tall as eight inches.  The caps are usually covered with with an olive green to brown slimy goo that all of the half dozen sources I read described as foul-smelling.  Some sites said the smell resembled rotting meat and one site said the smell was similar to rotting meat or dung.

I can’t give you my thoughts on what the slime smelled like because, even though I l was laying prone on my stomach for some of these shots, it did not occur to me to put my nose up close to the slime and take a whiff.  Now that I know they have a distinctive, intriguing smell I’ll probably get down and take a whiff given the chance, but not if I’m wearing my church clothes. 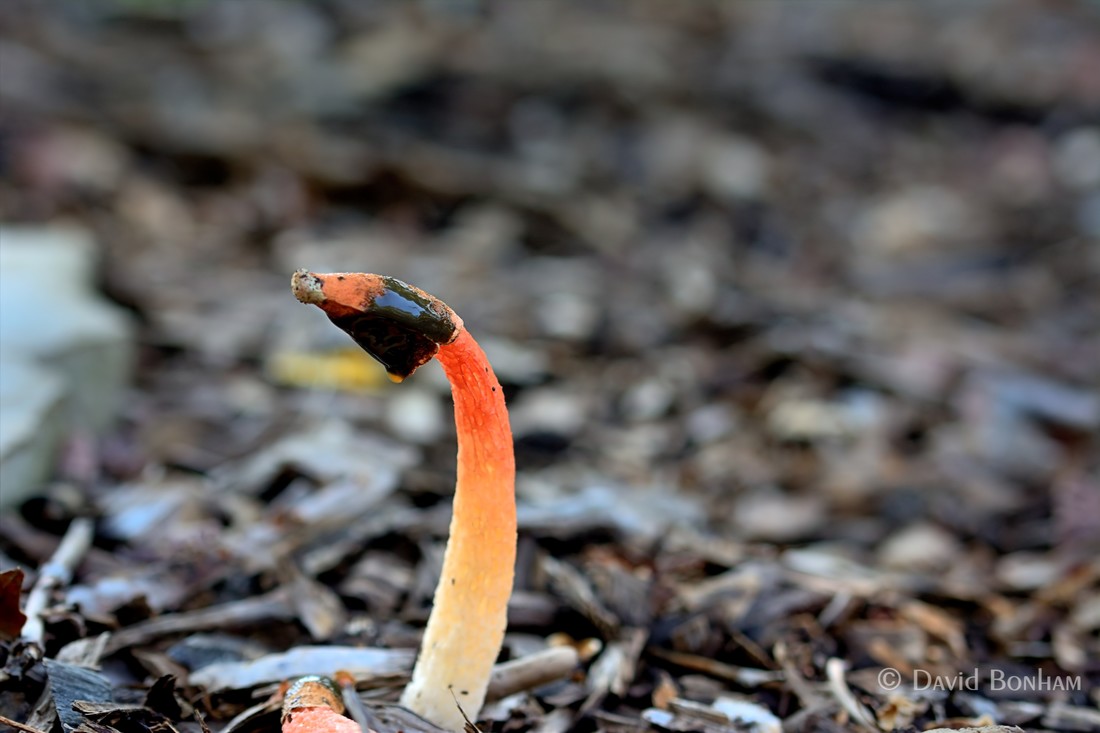 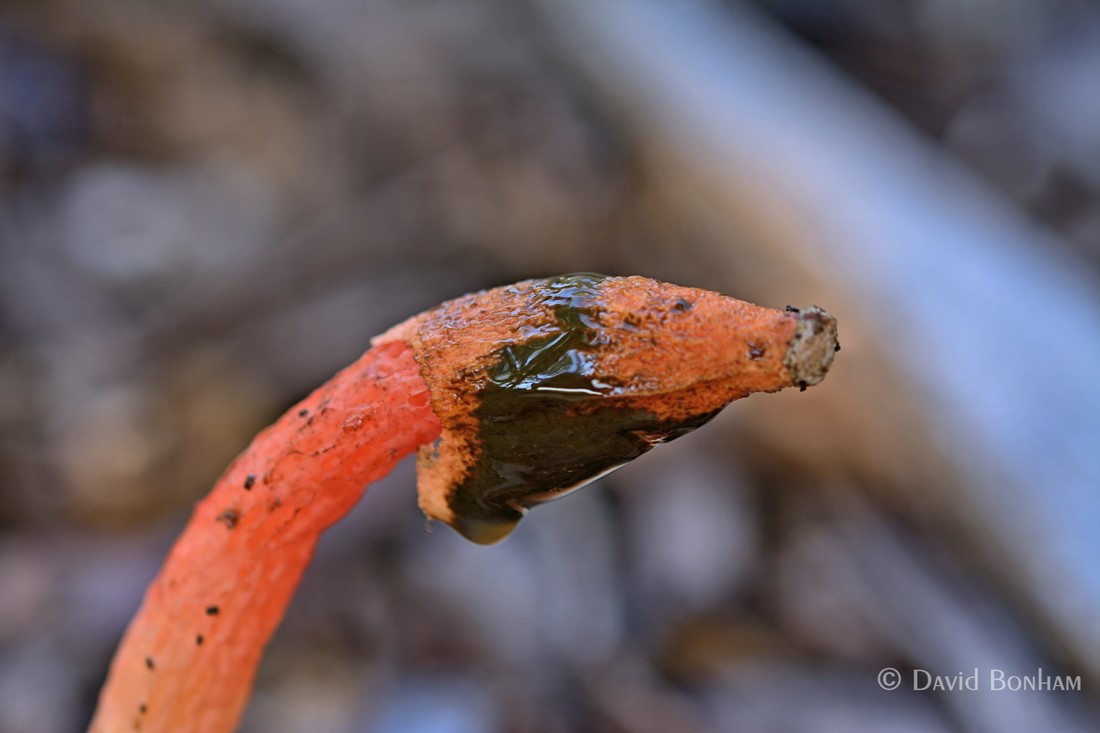 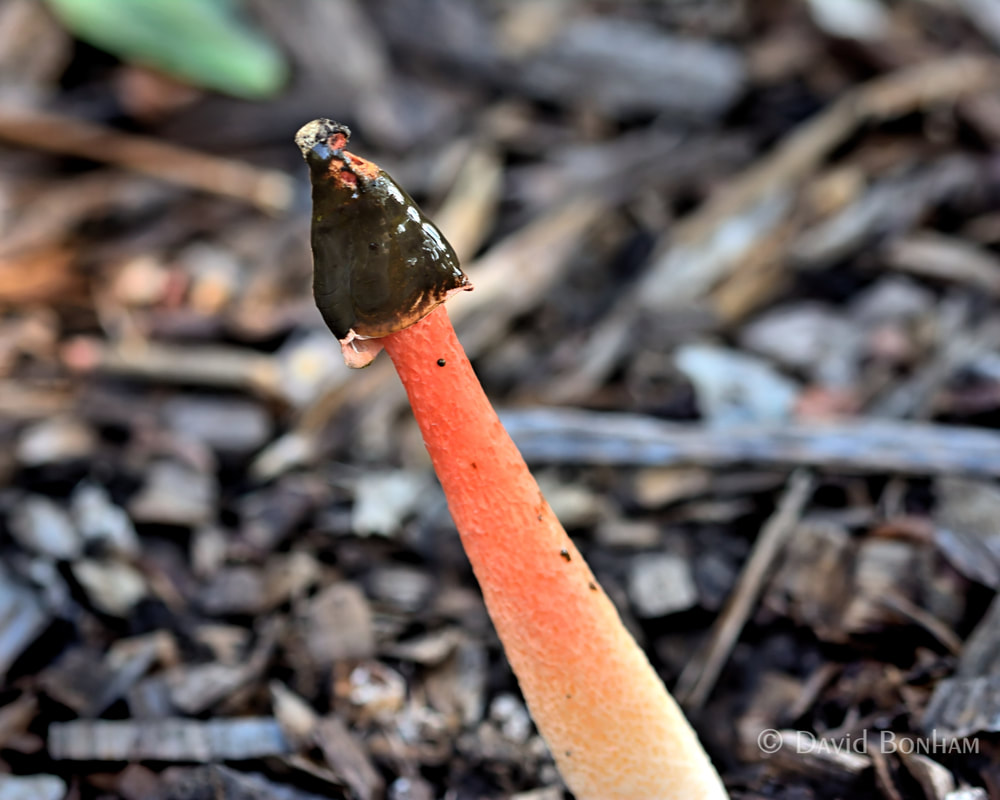 This photo shows the cross section of the stinkhorn’s stem.  Note it is hollow and has a double wall with tube-like cells.  I found nothing that explained why hollow or the tubes.  One site described the tubes as looking like pot holes – sure, if your pot holes are six feet deep. 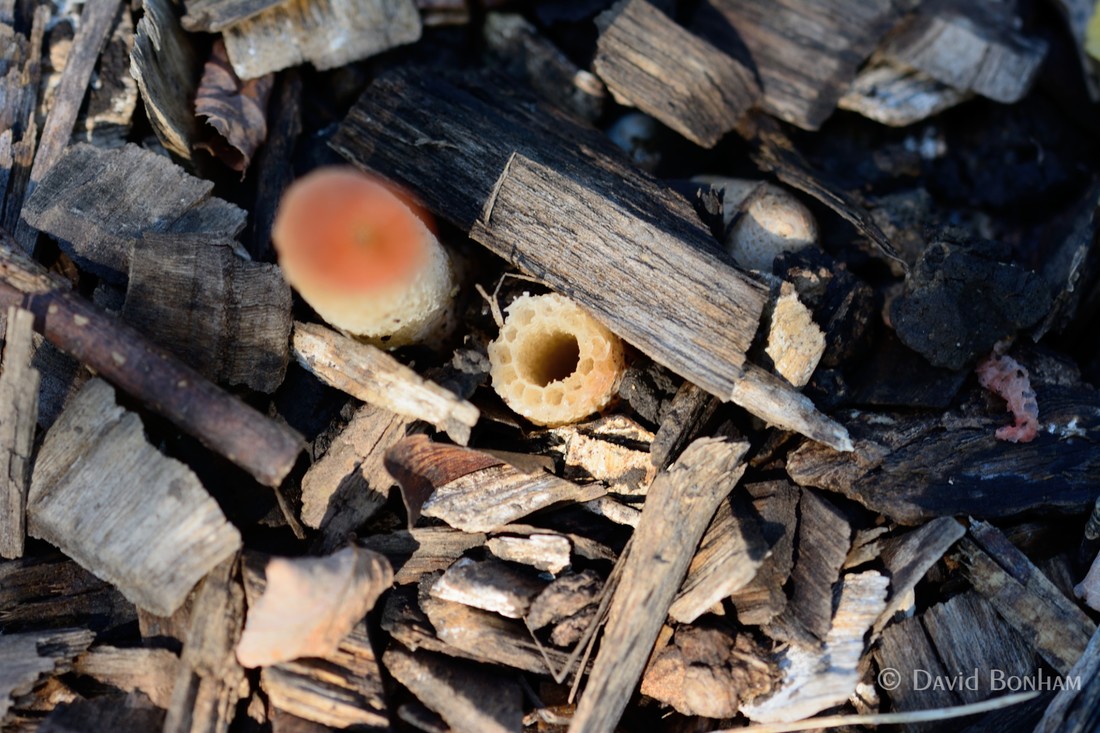 So why the slime?  It contains the mushrooms’ spores for reproduction.  Flies being flies are attracted to the rotting meat/dung smell of the slime and get it all over their feet.  The flies (other insects too) transport the sticking spores to rotting vegetation helping the life cycle to continue cycling. 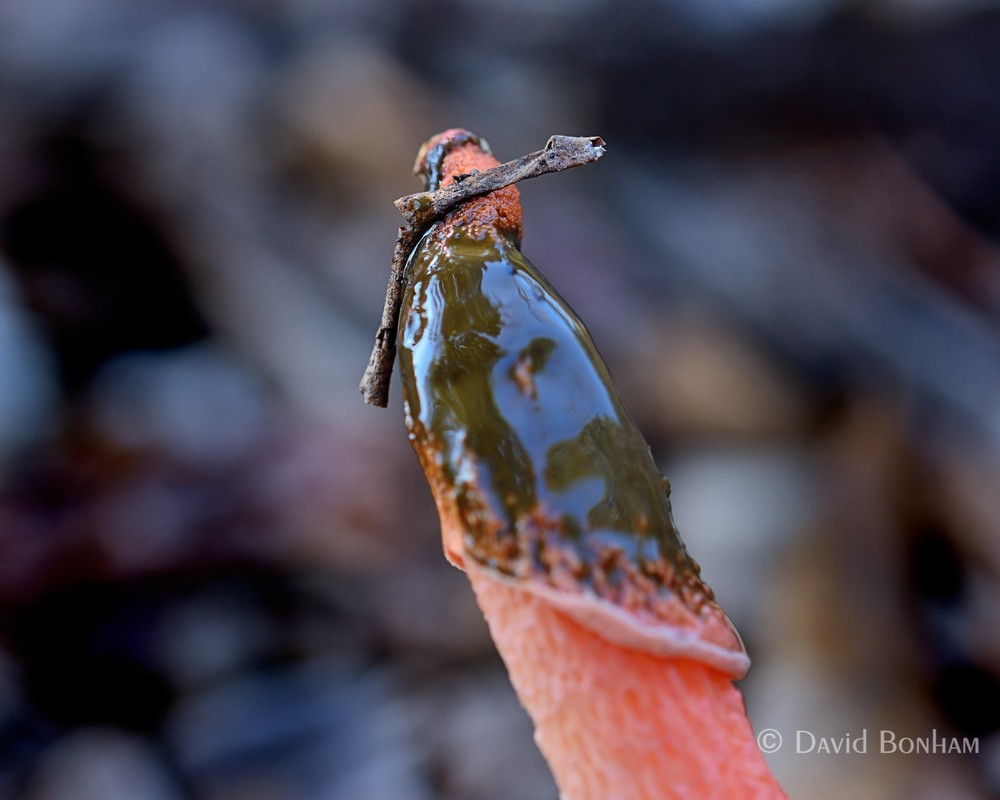 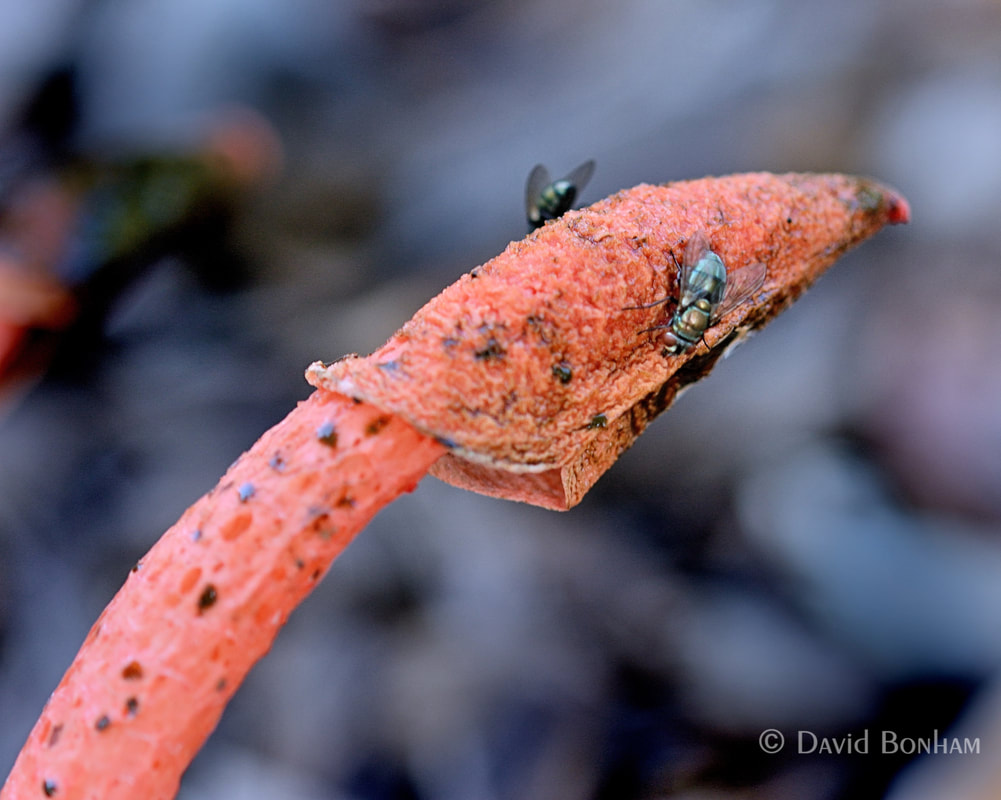 Okay, now for the elephant in the room.  At times I see things in my photos, especially those of plants and flowers, that are not really there.  It’s just that something about the subject or some other element in the photo may make me think of something else.  Kind of like when we were kids and would lay down on the grass on a nice summer day and look up at the puffy, billowing white clouds in a deep blue sky.  We would see all sorts shapes and things in the clouds like maybe a lion’s head, or a clown’s face, or the large hat worn by Pontius Pilate in Titian’s “Ecce Homo”, and other things.

In the case of the stinkhorn mushroom I was pretty sure other people would also see what I saw but was not really there.  To put it as delicately as I can, what I saw reminded me of of what one site referred to as … never mind, I really can’t put it delicately. 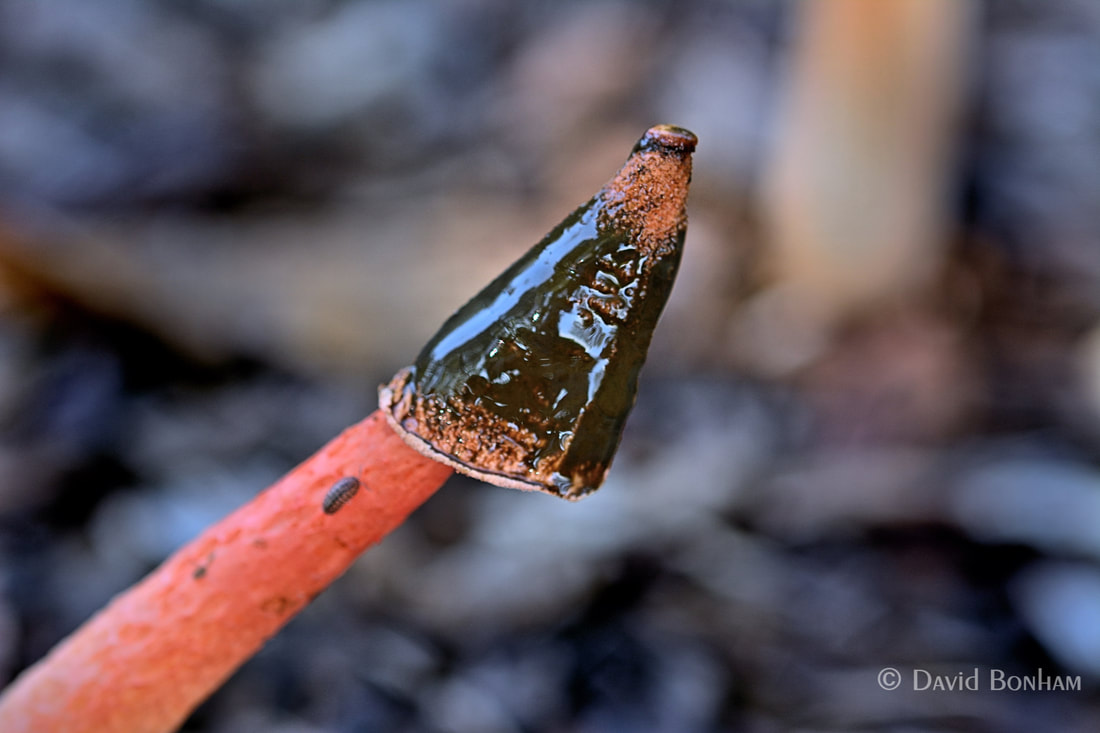