Last week I talked about how I was disappointed that we didn’t get to take a Spring Break road trip to Navarre, Florida as the pandemic was just starting to take hold in the US.  A month and a half later there was another disappointment in that one of my favorite festivals in St. Louis was canceled.  That was the Cinco de Mayo celebration held in the South St. Louis, Cherokee neighborhood.

I’m not complaining though.  I realize that so far my wife and I have been fortunate and that compared to what many others are experiencing, these disappointments are really just very very minor disruptions in our plans and routines.

Back to a more pleasant subject; last year’s Cinco de Mayo celebration in the Cherokee Street neighborhood.  This building is on the parade route, two blocks north and parallel with Cherokee Street where the festival activities are taking place.  If you look at the street signs below you’ll see one of the things people notice about this area of South St. Louis; so many streets named after states.  I guess they ran out of tree names.

As you can see from the building, the Cherokee neighborhood is not what one would call upscale, but it is a fun, vibrant area.  The eastern end of the street is home to several very good Mexican restaurants, and shops with merchandise geared to the Latino population in this part of the neighborhood.  Several blocks to the East, Cherokee Street is know for its numerous antique shops and boutiques. 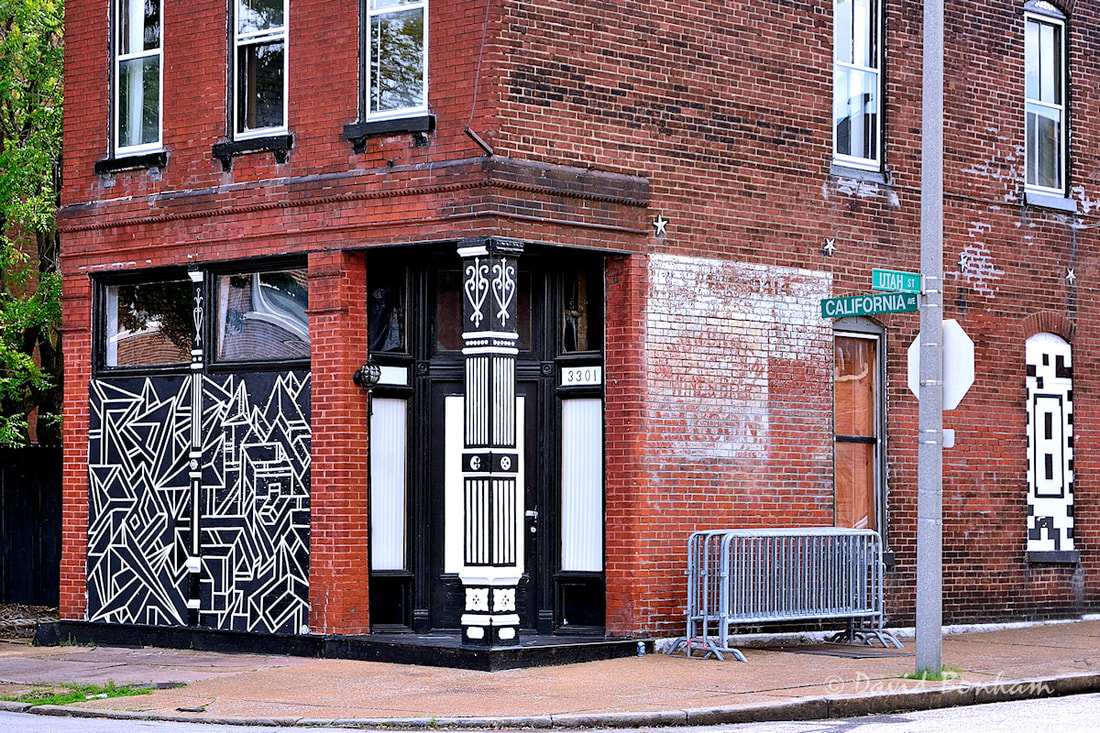 Even though I made a big mistake here in the composition of this shot, I’m showing it anyway because it is still a bit interesting.  The mistake of course is that did not include all of the antlers, nor the feathers behind, in the shot.  Live and learn.  For the life of me I can’t figure out what that blue thing is in his headdress.  I’ve looked at my master tif file and, even blown up, the detail is not good enough to make it out. 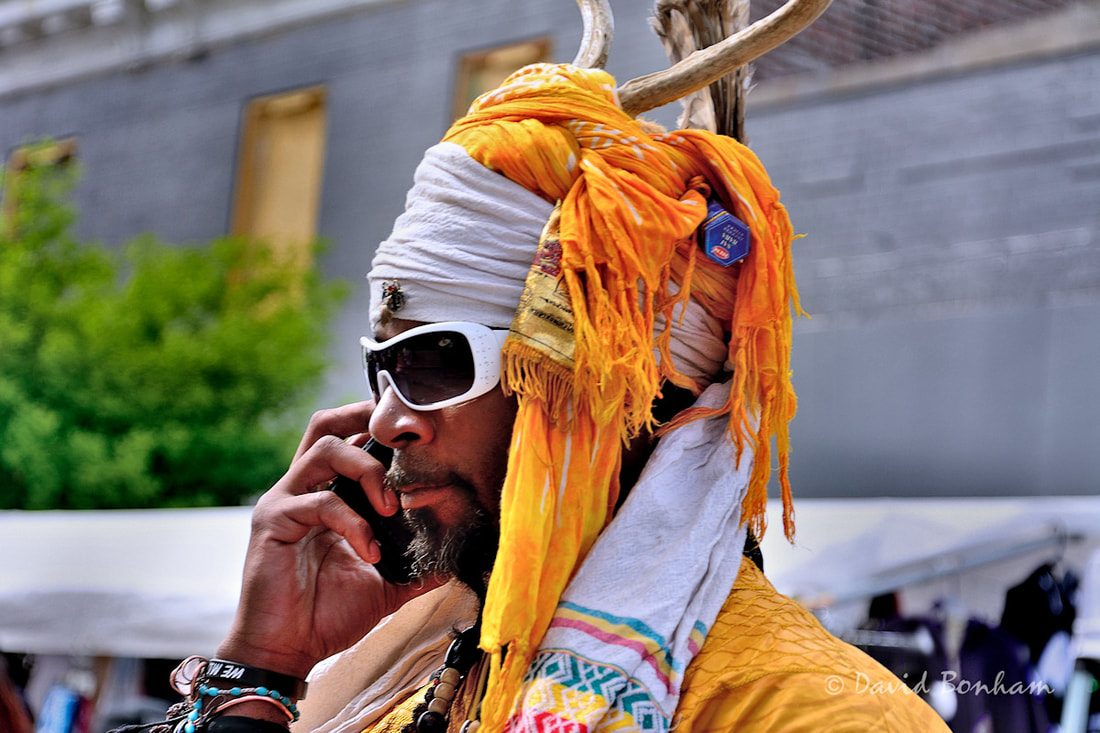 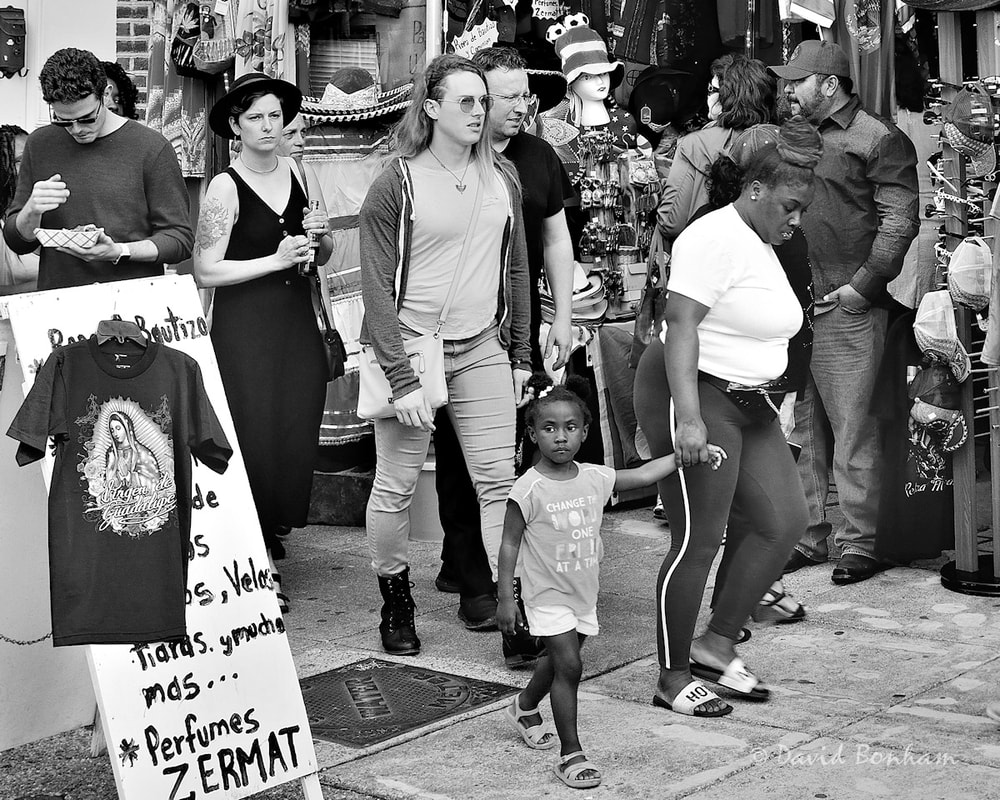 Originally I had this as all black and white but the subject got lost in the crowd even though there’s decent separation with focus.  Sometimes a photo just has to be black and white.  And sometimes a pop of color or colors demands attention. 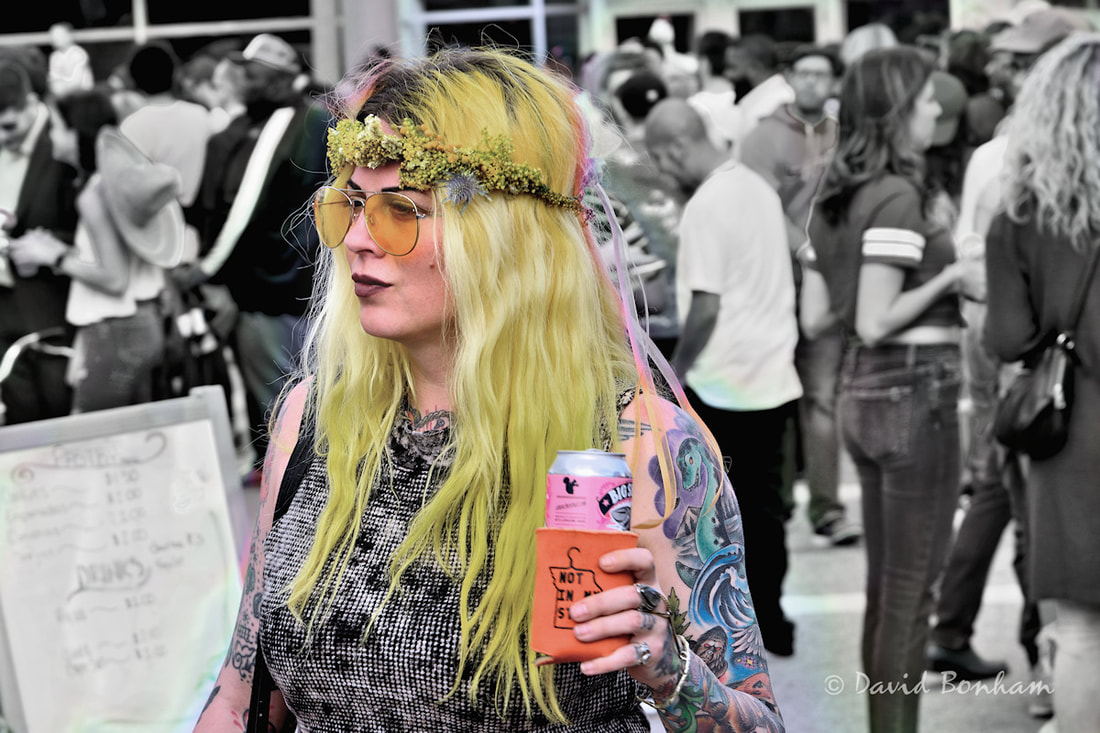 Happy guy.  Note the Whiskey Ring sign.  This prompted me to add some extra value to this post and at no extra cost if you are a regular reader of this blog.  I looked this up a few years ago out of curiosity.  If you are in Scotland you will see the word whisky (no “e”) because that’s the way the Scots spell it.  That’s also the way it is spelled when made in Japan or Canada.  When made in Ireland or the United States it is spelled with an e as in the sign below. 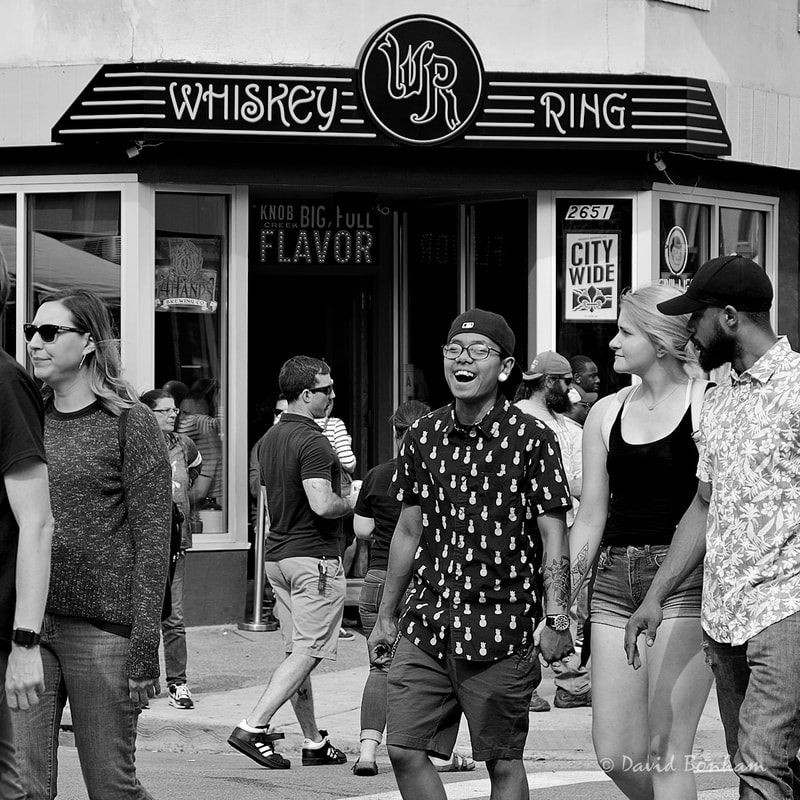 The next three photos have in the background what basically amounts to a three dimensional, blow up, political cartoon.  But I was more interested in the real people on the roof who had a bird’s eye view of all that was going on, and the cool architectural detail of the roof line.

These two don’t even know I’m taking their picture. 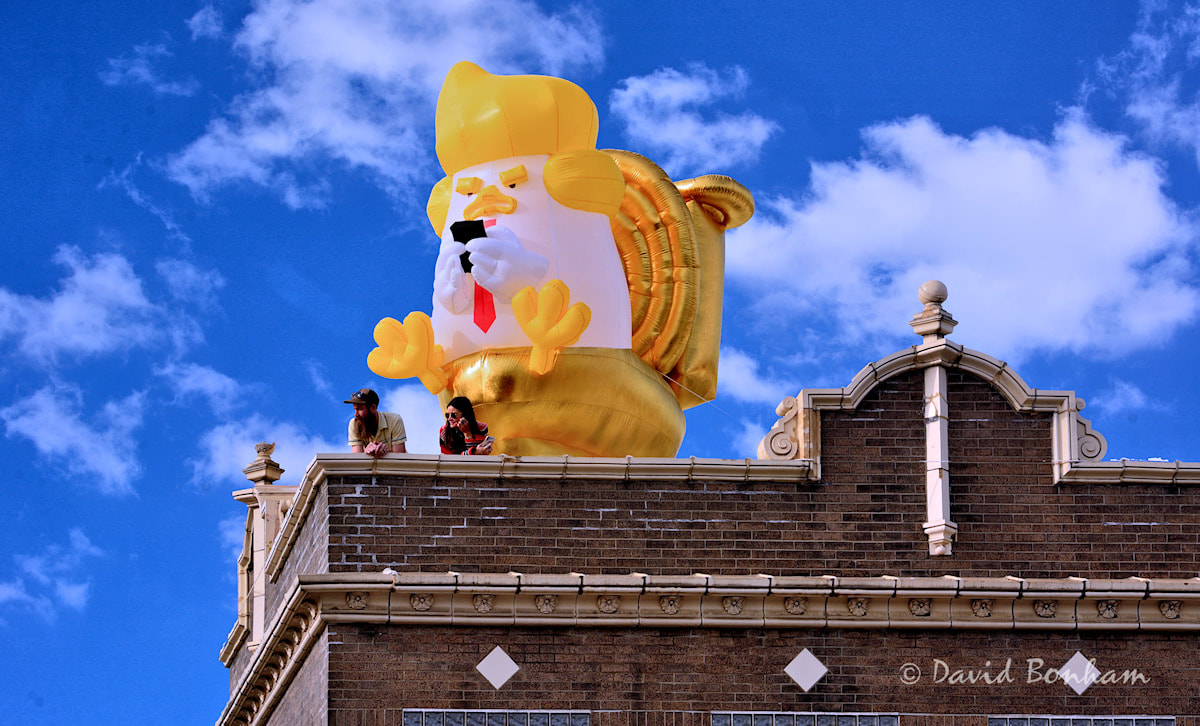 Oops, I may have been spotted. 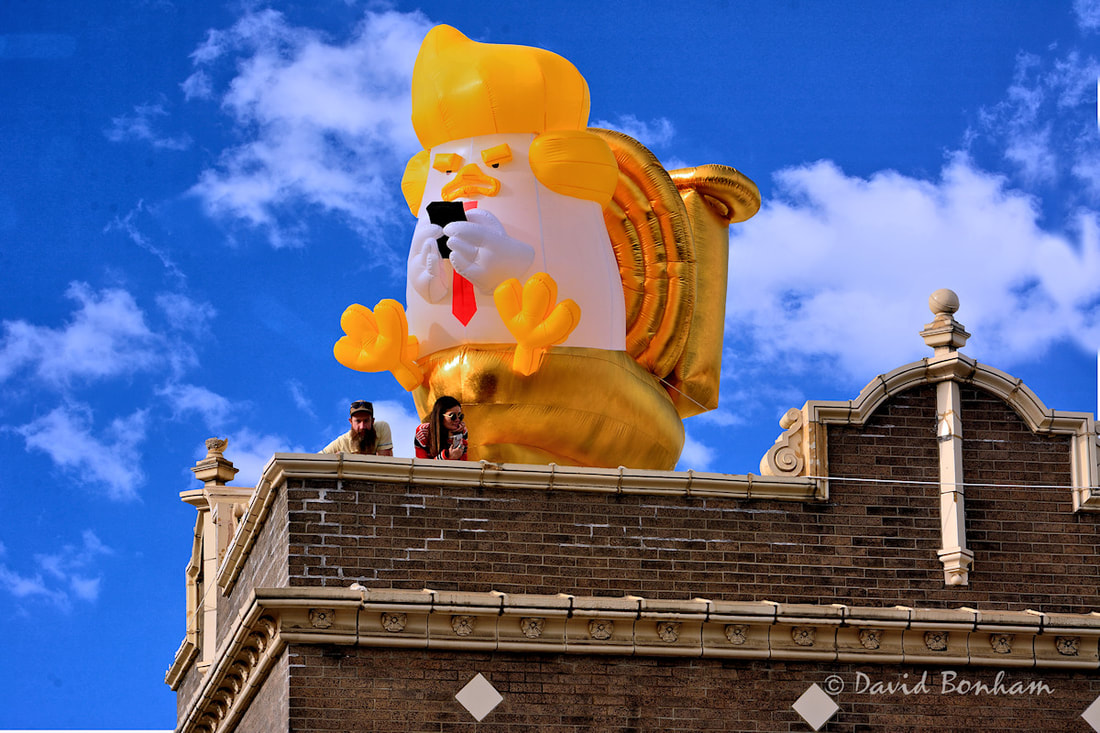 Oh yeah, they see me now.  Being the polite guy I am, I waved back. 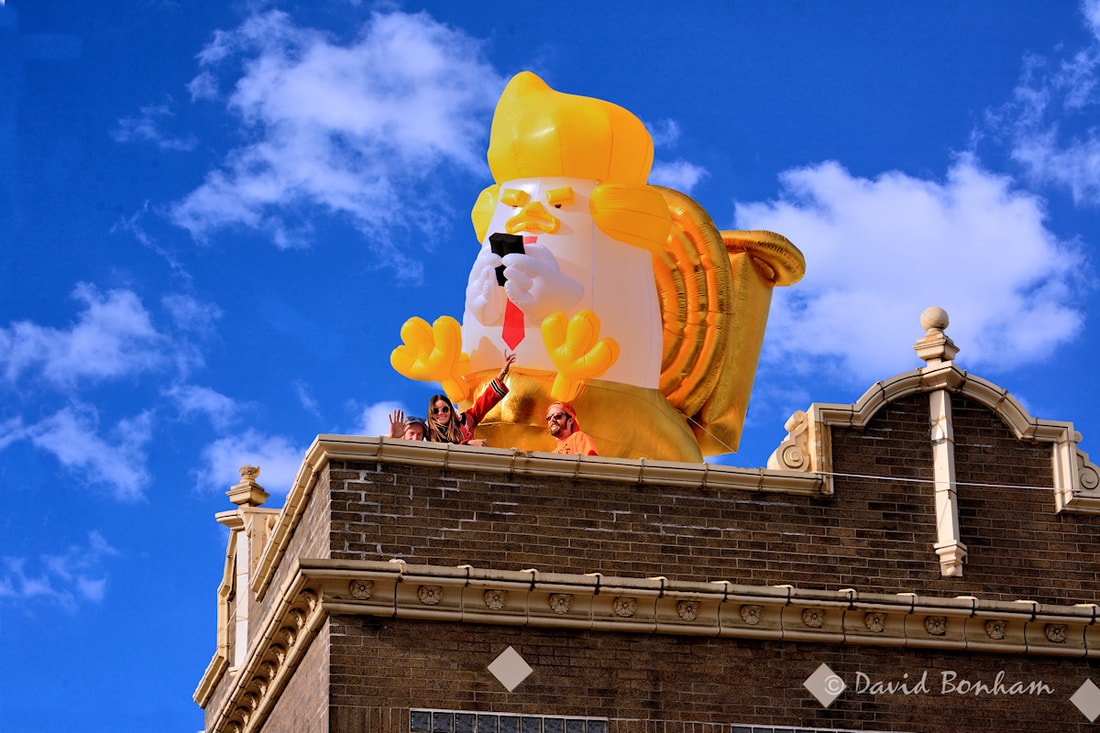