Tower Grove Park is St. Louis City’s second largest park.  Below are some size comparison (acres) starting, with St. Louis’ largest park, to give you an idea of it’s size.

I usually visit Tower Grove Park twice a year.  First in the spring when a local, independent, listener-supported radio station (KDHX) broadcasts live on a Saturday morning in a open air pavilion next to an area set up for a farmer’s market.  Most of the time the weather cooperates for this one day event which attracts everyone from babies to grandparents.

With the farmer’s market on one side of the broadcast pavilion, a large wading/splash pool on the other side, and food trucks across the grassy expanse on the other side of the wading pool, it’s no wonder the event attracts such a diverse crowd.  My wife and I go each year because our son’s band is the sole performance during KDHX’s live broadcast, and his family goes too so we get to be with our oldest grandson.  Also our daughter and her family usually goes so we also get to have time with our other grandson and our granddaughter.  So the grownups have a good time talking and listening to music and the cousins have a great time in the wading/splash pool.

My second visit during the year is usually in late summer and I go for one primary reason:  dragonflies.  The first time I went I didn’t know what to expect and it was a photographic bonanza.  My only lens was the Sigma 105mm macro and I managed to get several good dragonfly shots.  Unexpectedly I also got several good shots ducks taking off from the park’s small lake (the taking off part where they kind of run on water with their wings flapping) and some good shots (at least for me) of the duck in flight zipping past me at eye level.

The second time I went I came home empty handed as the dragonflies were out of reach for my 105mm macro lens. So, the last few times I’ve gone to Tower Grove Park for photos, I’ve taken my 80-400mm telephoto zoom.

Okay, enough with all the words, lets get to the photos.

Oops.  One more thought.  You know how I occasionally remind you that my photos are normally on a one year lag, often to the month.  With the new year I’m now way out of sync because I am now only on photos from September 2019.

When ever I see one of these coming up out of the water at this angle I think of an organic shower head.  Most people probably think of a lotus seed head.  I can’t help it, I see things. 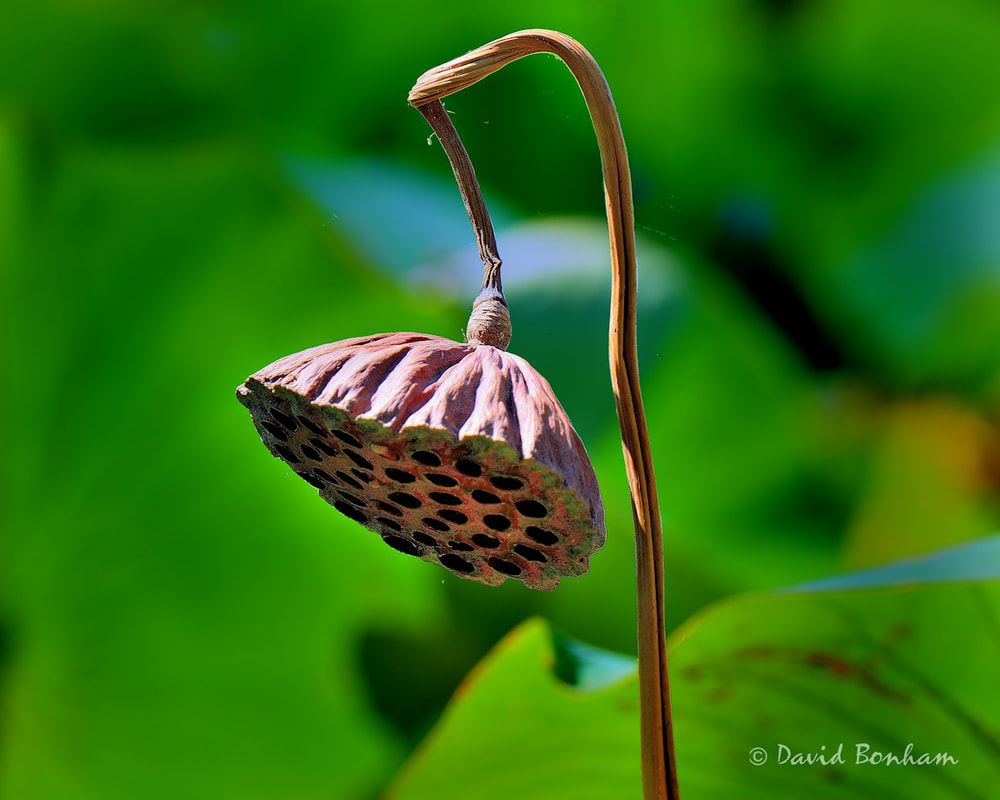 Following are several photos of dragonflies. 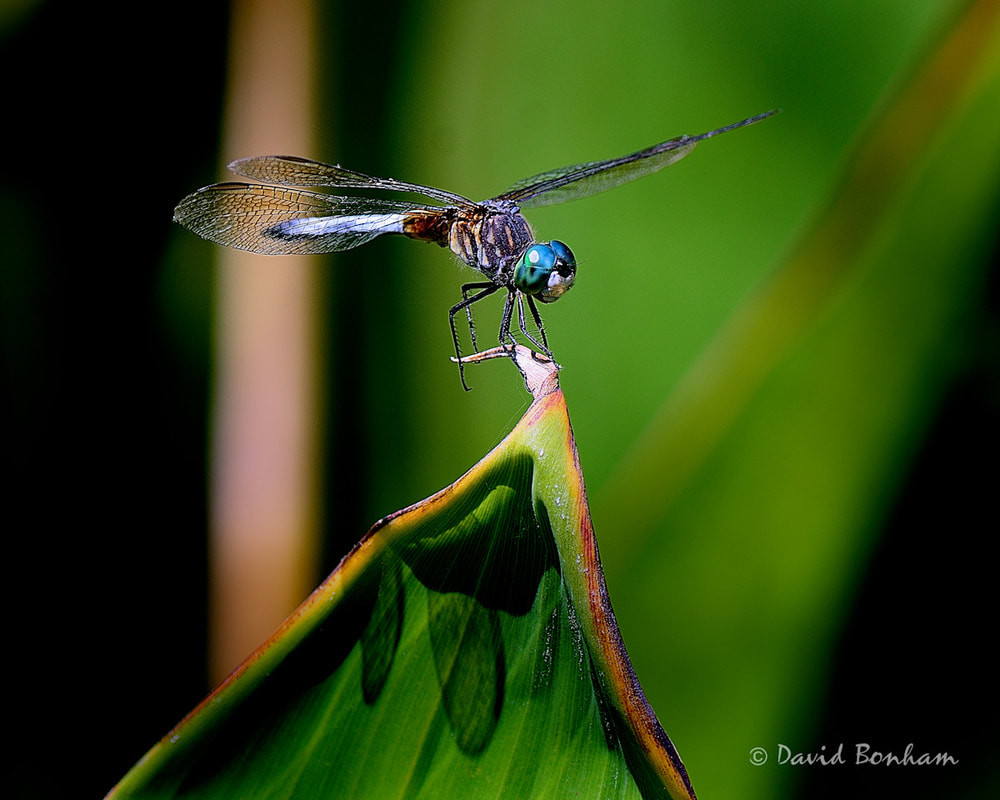 Same as above, just a bit closer and showing more of the left wing. 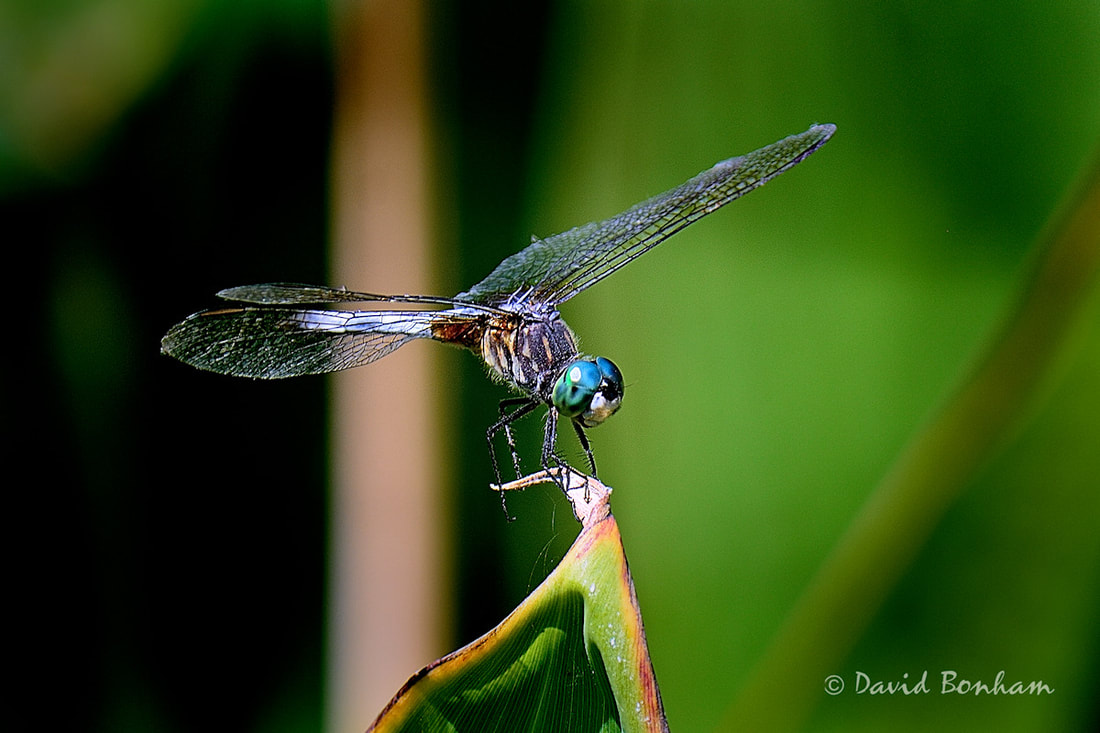 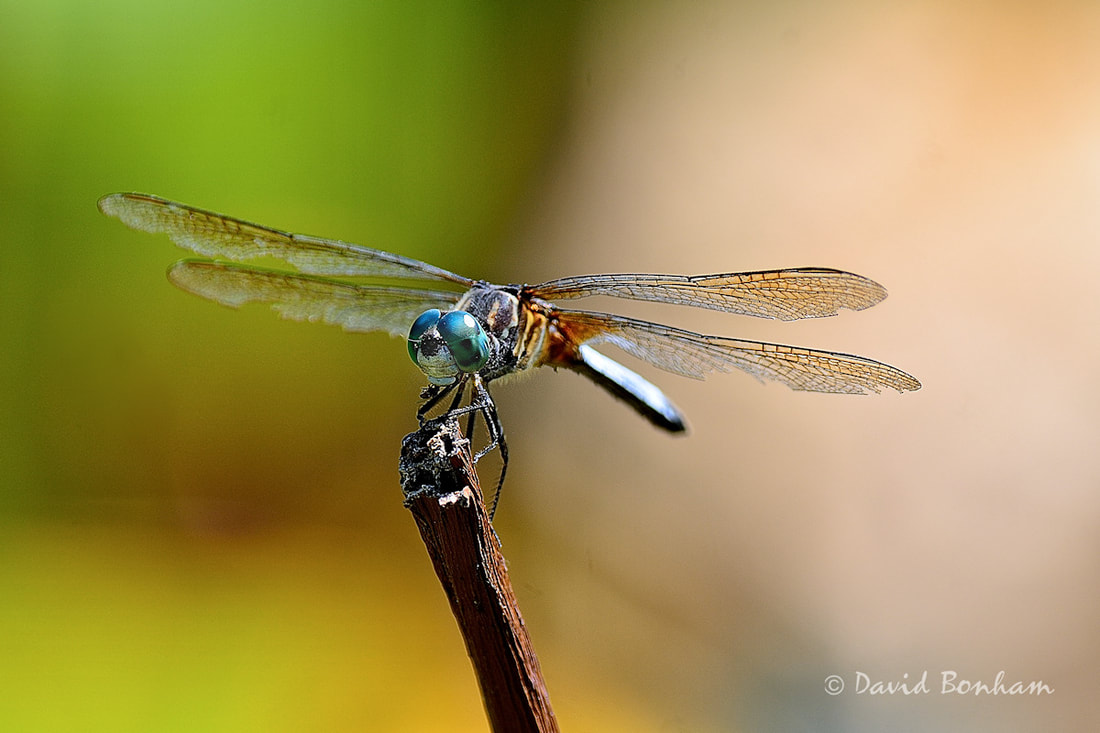 I really like this photo because of the way the curved line of the leaf cleaves out a large black empty space that contrasts nicely with the almost solid green space on the other side. 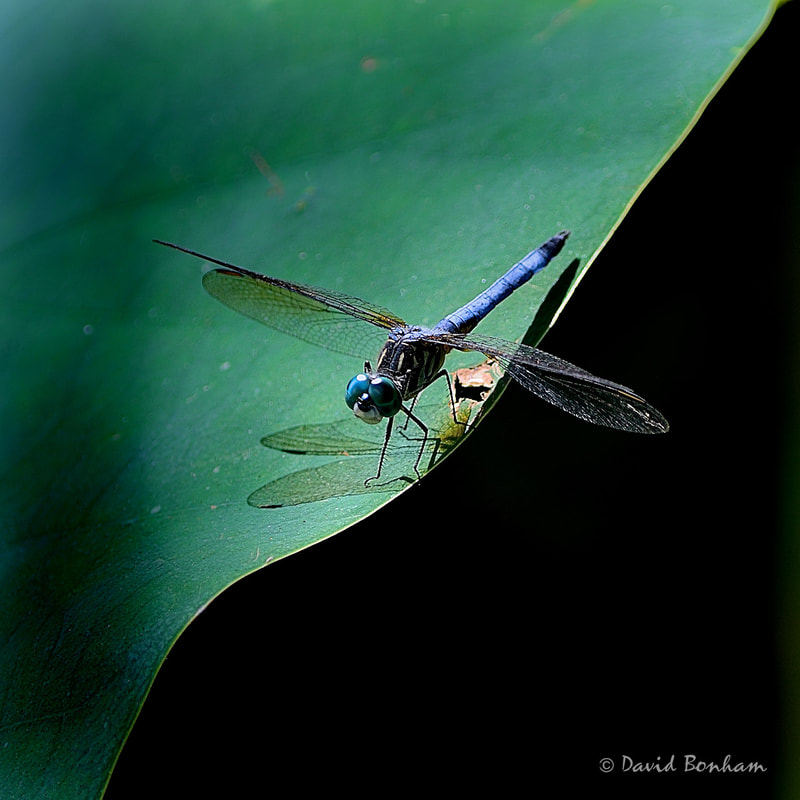 A darn good landscape photo of a carpenter bee’s rear end, if I may say so myself.

The bee is on what I think is a thalia dealbata, commonly called hardy water canna or powdery thalia.  When I say commonly called I don’t mean by me.  For several years I have noted this plant around many ponds and lake in the St. Louis area and, before finally looking it up a few days ago, I commonly called it that plant with the purple beads.  I also called it the mardi gras plant because in some earlier photos it looks like a mardi gras decoration. 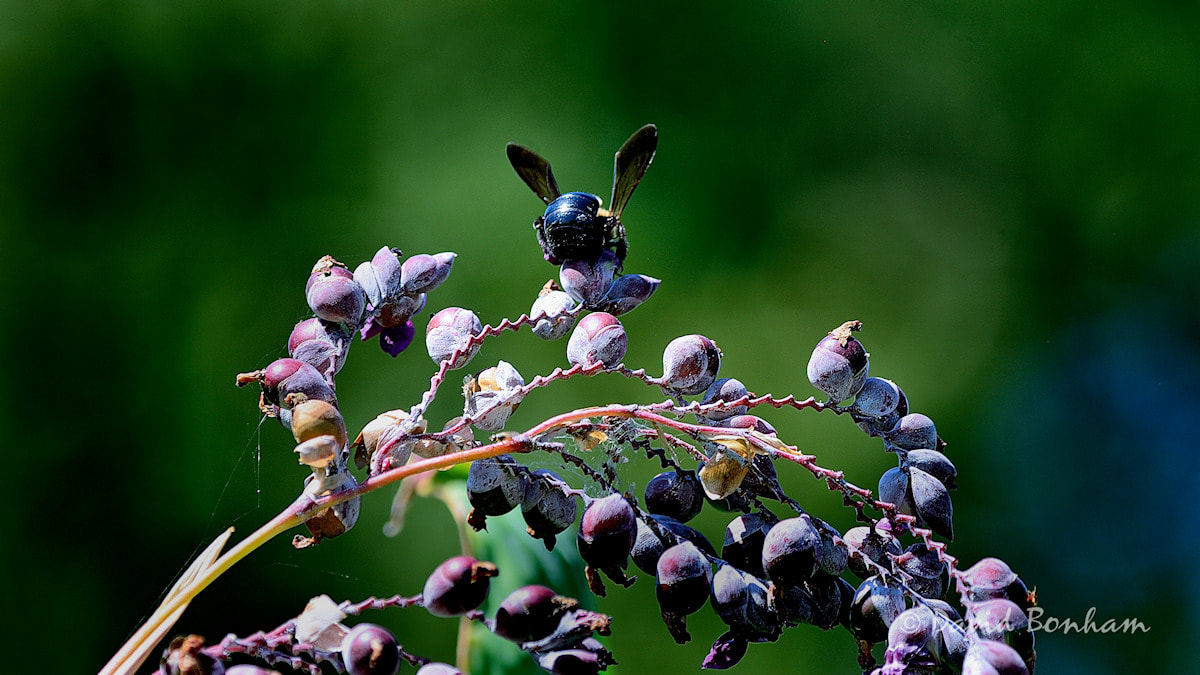 Genesis of one of those organic shower heads shown in the first photo of this post.  But it also looks like very fancy ballerina’s tutu that my 3 year old granddaughter would love to slip off the seed head and put on herself. 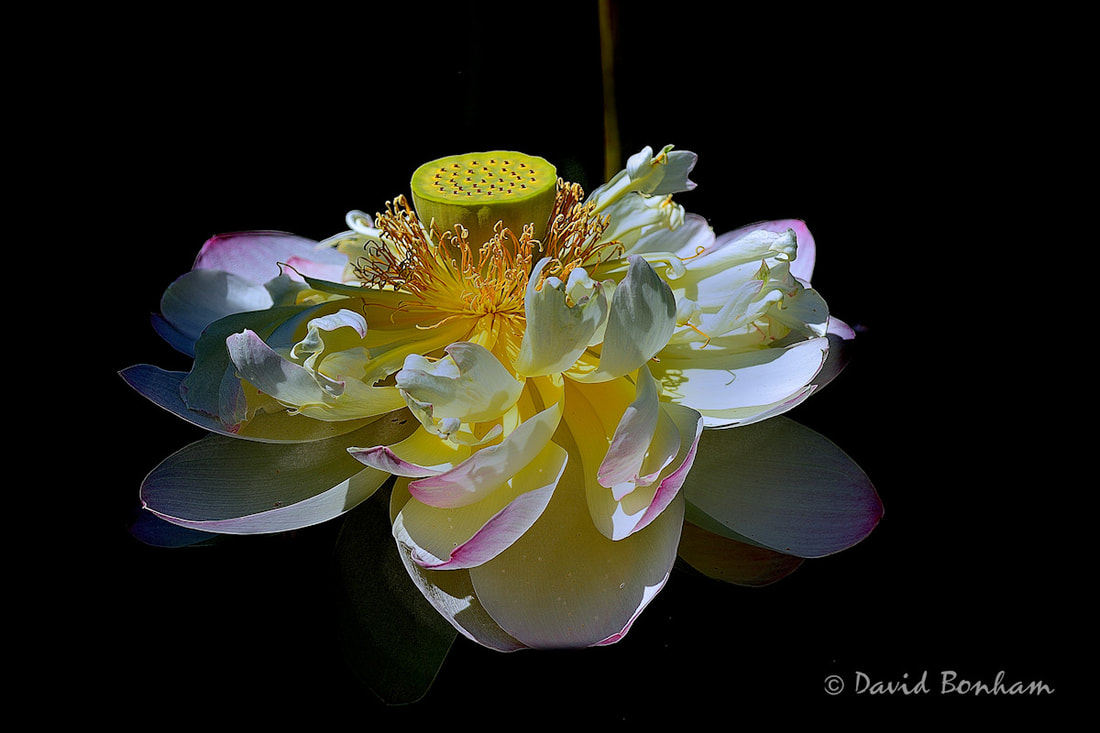 Thank you for stopping by and be sure to visit my next post to see the rest of the photos from this trip to Tower Grove Park.