Our last road trip was a long weekend in Louisville, Kentucky – home of the Louisville Slugger baseball bat, many Kentucky Bourbon whiskey distillers, and of course the Kentucky Derby.  I was looking for another long weekend trip and decided on Cleveland.

We checked with P&B and they were up for it.  They were with us on both of or trips to Orange Beach, Alabama; South Dakota and Colorado (Mt. Rushmore, Badlands, Custer State Park in the Black Hills, Sturgis, Deadwood, Garden of the Gods and Pikes Peak), and our Louisville trip.  S&K who went with us on the two Orange Beach and Louisville trips couldn’t make this one.  But we did pick up two more travel companions, J&G.

Like the other two couples, we’ve known J&G for 50+ years but we don’t get to see them much because they’ve lived in Louisville since the mid-80s.  We did get together with them on our Louisville trip and it was decided then that we would try to get together the next time we planned a road trip.

So why Cleveland, Ohio?!   I got out my road atlas and looked around for potential places and thought Cleveland might be a good choice because neither my wife nor I had ever been there and it would be a comfortable two day drive.  I did a quick search online for Cleveland and saw that Cleveland is where the Rock & Roll Hall of Fame is located.  I thought okay, so there is it least one thing to do, even if it is kind of cheesy.  Other than that we had no inteneray or expectations for the trip other than to get a change of scenery and be together with good friends.

(Compared to our 10+ hours drive on the first leg of our trips to St. Pete Beach, Florida, 7 hours in nothing.  It’s those last 3 hours that are killers.)

The next day’s drive from Columbus to Cleveland would be an easy two hours.  We could get up at a normal time, enjoy the hotel’s free breakfast, and arrive in Cleveland about the time the R&RHOF opens.

So here are some of my photos from our Cleveland road trip.  First stop the R&RHOF.

The parking garage for the R&RHOF sits between the hall of fame and this steamship.  Just for reference, Cleveland sits on the southwest shore of Lake Erie and the R&RHOF is located on the water’s edge. 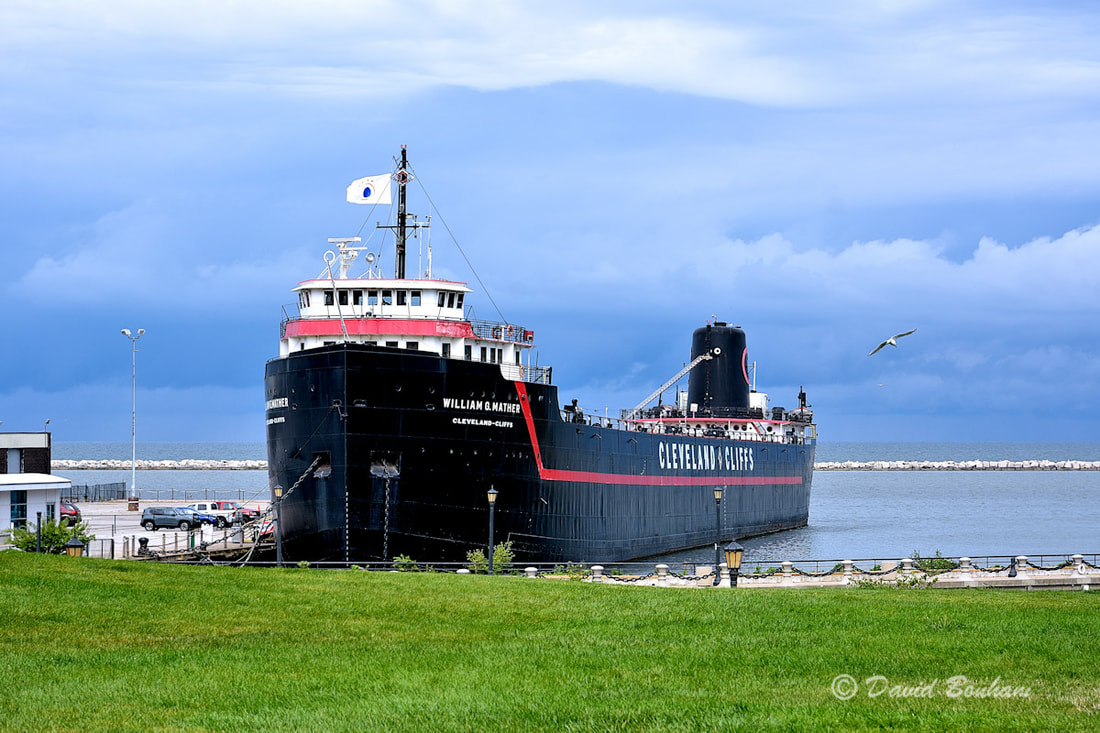 This is a view of Cleveland’s skyline as seen from in front of the hall of fame looking across two streets and a four lane highway. 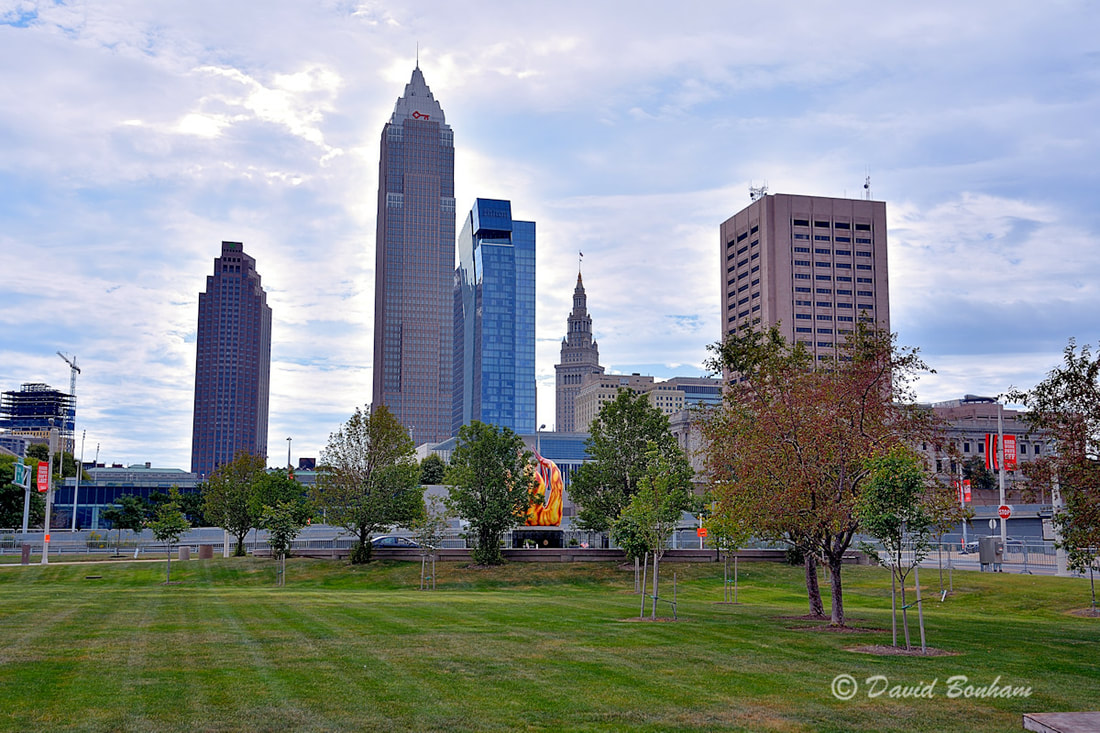 This is the entrance to the Rock & Roll Hall of Fame; not that impressive a facade but the glass paneled roofing for the building is. 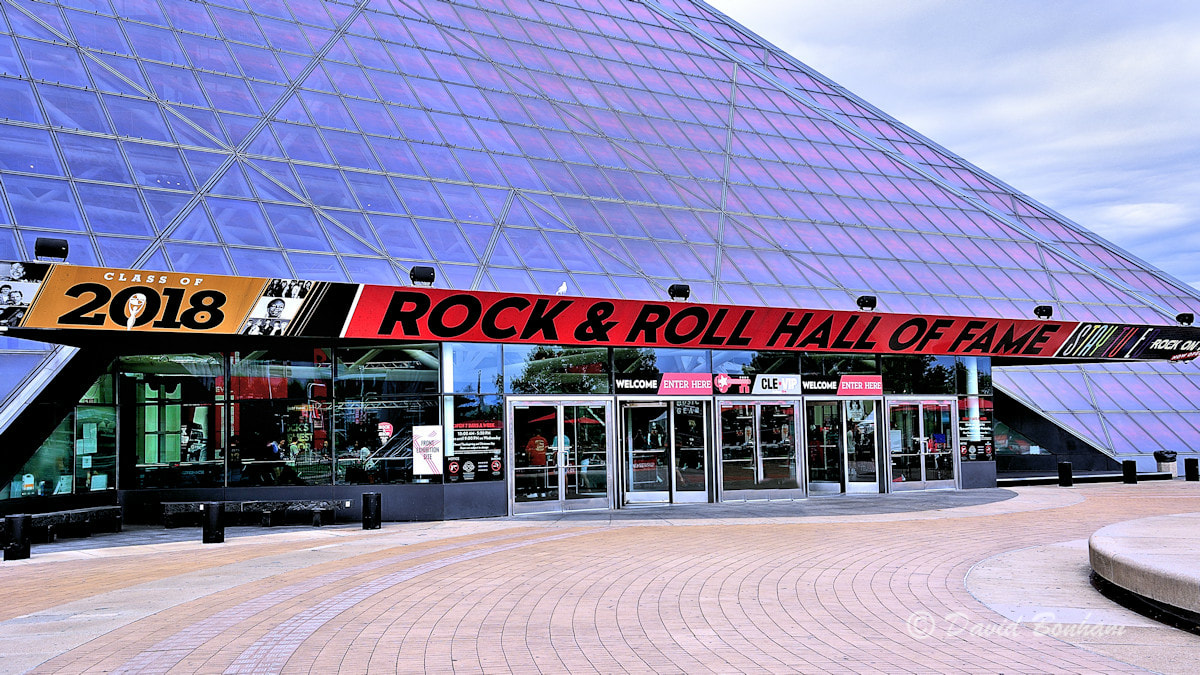 Window cleaner.  If you are the type of person who is overwhelmed by large tasks, you may not want his job. 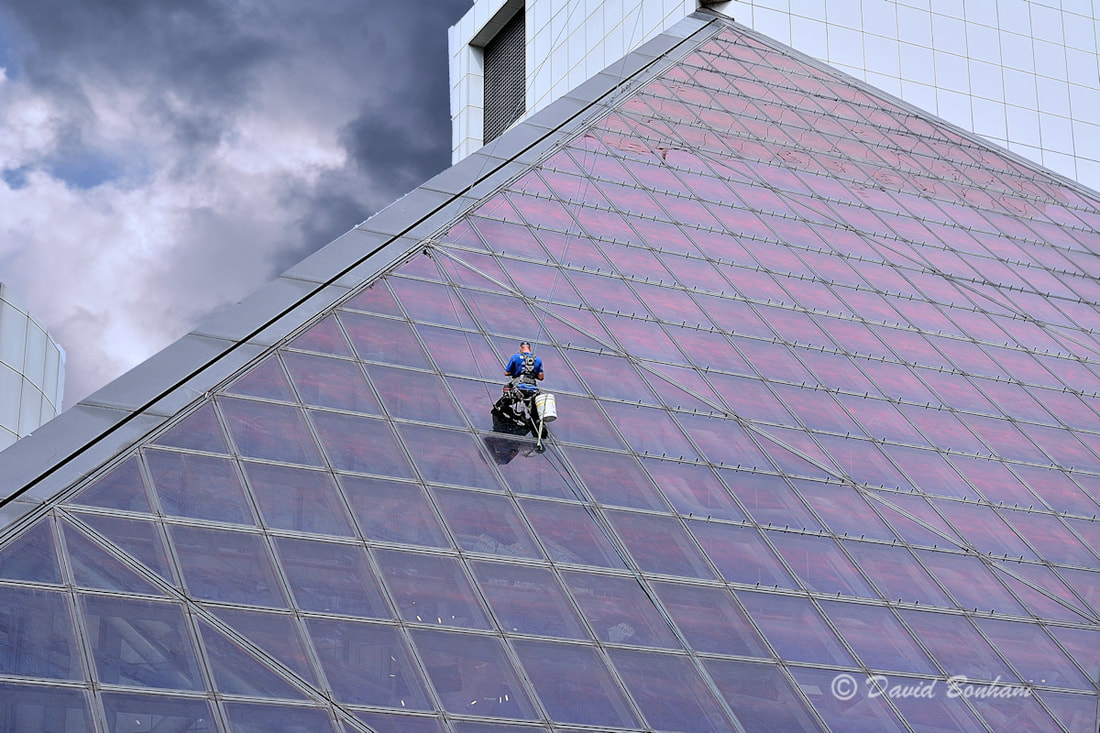 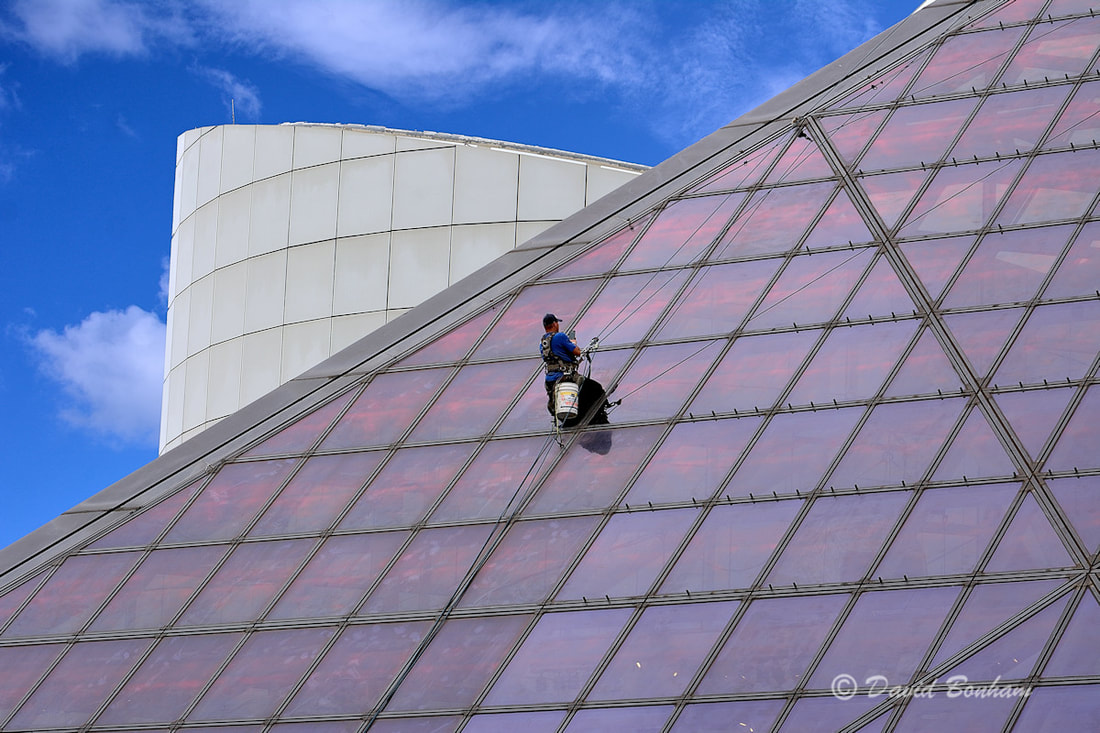 This large sign sits out a few hundred feet from the front of the R&RHOF building.  Like all the other tourists, my wife and I (and P&B and J&G) had pictures taken of us while sitting in the “O”, standing in it, peeking through, etc.  The letters are 6 feet (1.8m) tall and 78 feet (23.8m) long.

I don’t have any pictures from inside except for a couple of friends and wife.  I did take a number of pictures of guitars belonging to famous musicians, Michael Jackson’s rhinestone glove, and a few other exhibits but in the end I deleted them all (except the people pictures) because as I went through them I thought so what.  There’s nothing special in the way I took the picture and most of what I took can be probably been seen somewhere on-line.

We had planned on spending an hour or two at the hall of fame but after about four to five hours (including and onsite lunch break) we called it quits.  We had see almost everything and had entered our nominations for who we would like to see in the hall of fame.  We split up between Tina Turner and Cher.  Tina is already in as part of Ike and Tina Turner but she’s had such a great career after Ike I think she should be in as a solo.  Cher we learned has never been nominated which I find pretty unbelievable.

Anyway, like I said we were there for over four hours and honestly could have spent another hour.  Being Baby Boomers we literally grew up with rock and roll and so all the time periods were of interest to us, even the early pre-1950s roots based Appalachian bluegrass and blues that traveled up the Mississippi River.  There is a lot of rock and roll memorabilia on display and lots of videos of performances and documentaries relating what was going on in the country (socially and politically) that tied in with the music.  In short I went in with low expectations thinking I wouldn’t last more than an hour but I was completely blown away and would definitely go again if the chance came up. 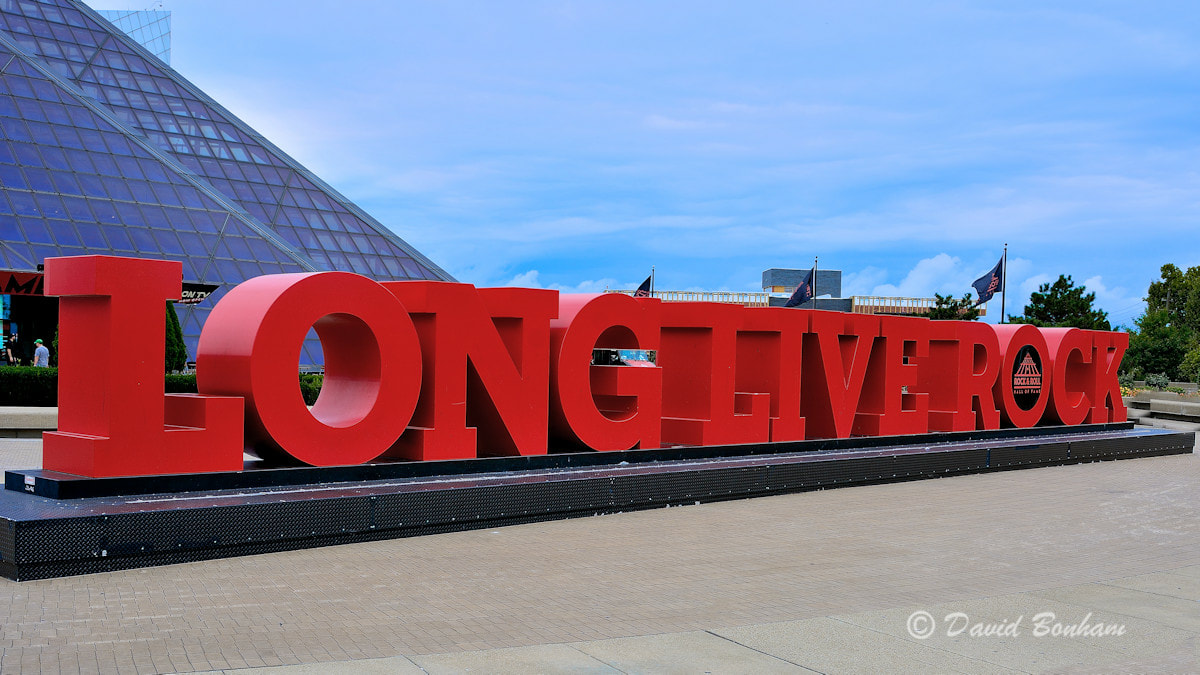 A closer look and from a different angle of the center buildings in the skyline photo above. 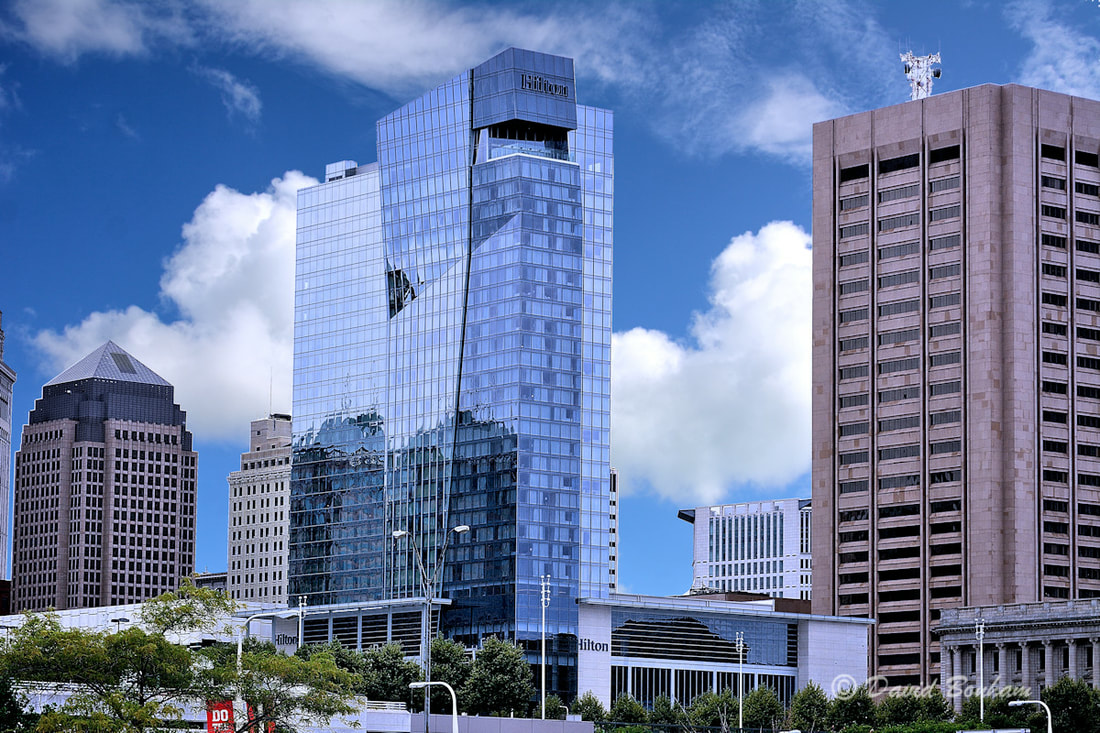 This was taken in a city park behind the R&RHOF. 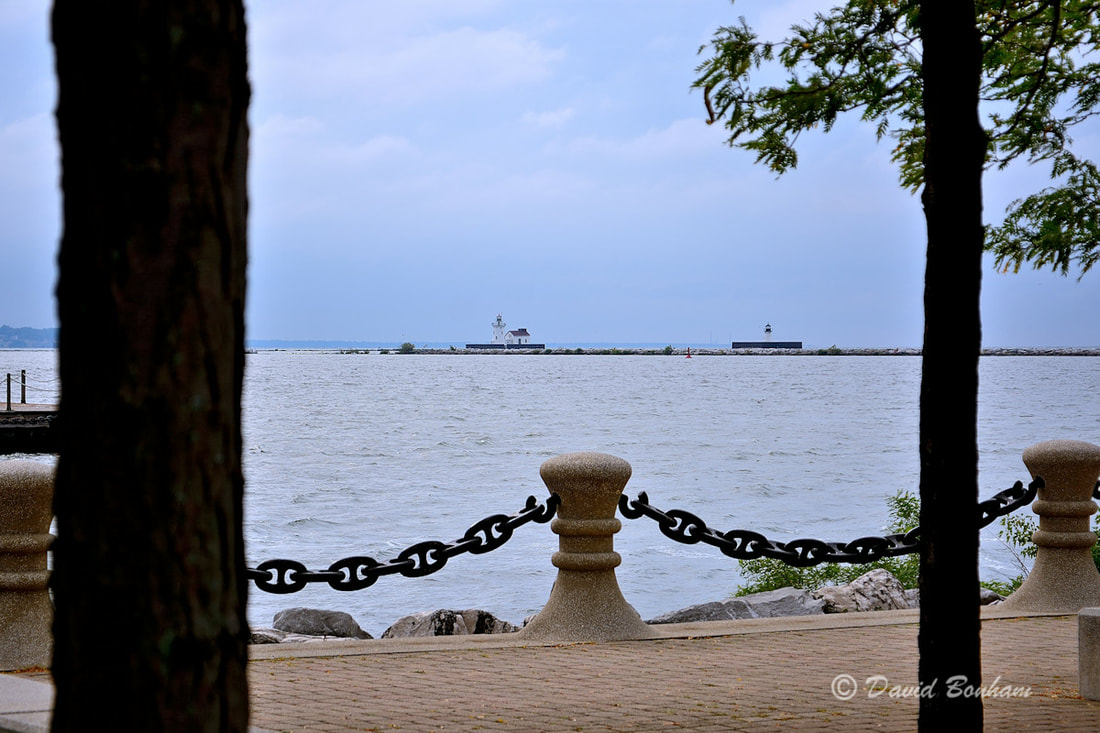 Our first day in Cleveland was taken up with the R&RHOF.  So what else of interest did we find in Cleveland?  The next morning we found a tribute to the movie A Christmas Story.  The movie’s story takes place in the fictional town of Hohman, Indiana but all the exterior shots were filmed in Cleveland and the interior scenes where shot in Toronto, Canada.  Below is Ralphie’s house with the iconic stocking leg lamp. 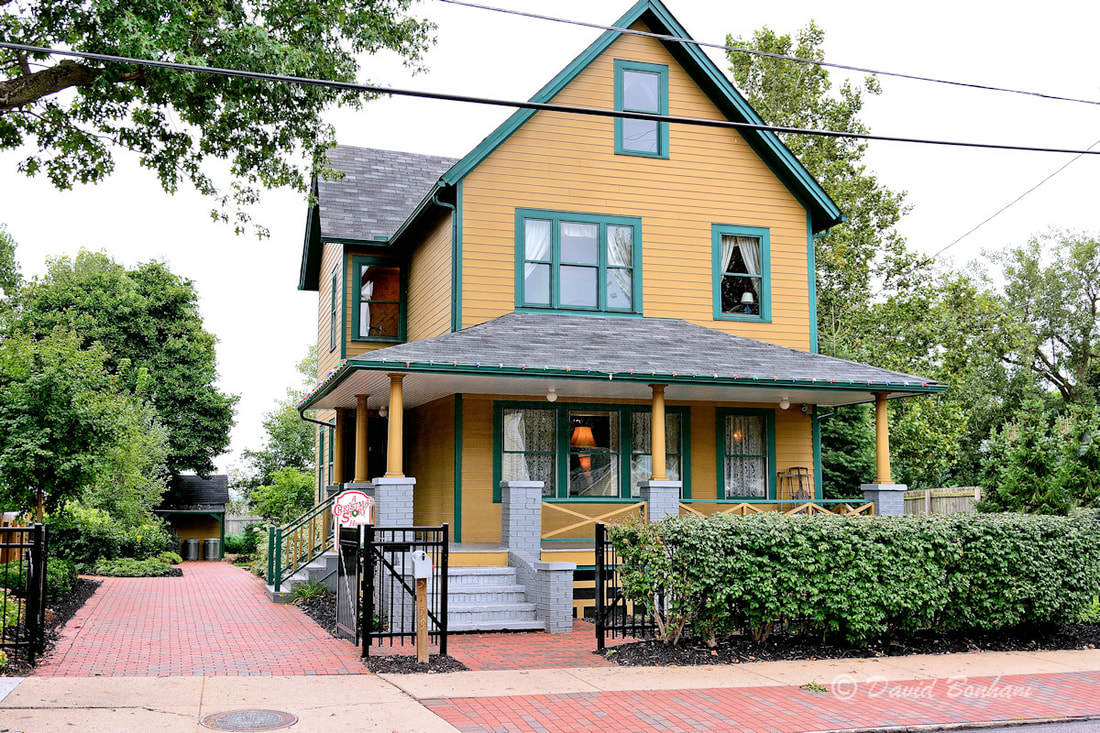 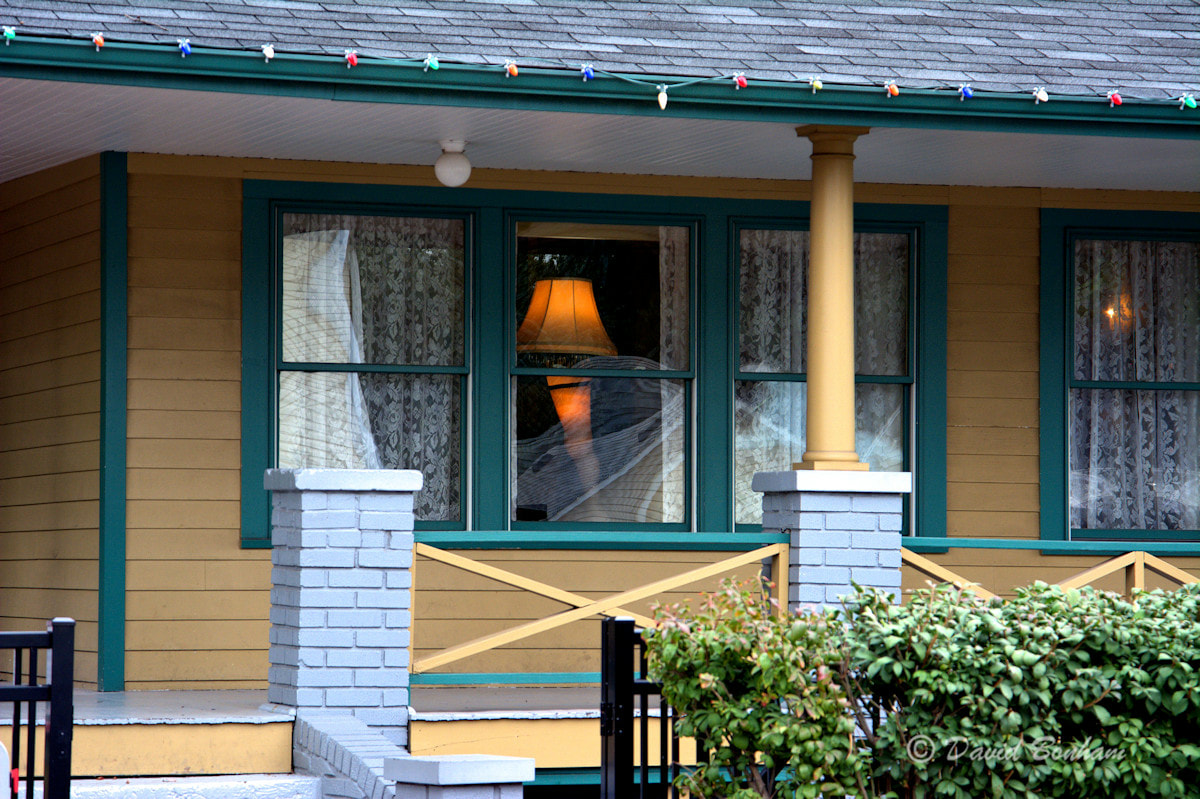 After taking pictures of us in front of the house and down the side driveway we went across the street the gift shop.  As you would expect it was full of Christmas ornaments and nick nacks related to the movie but missing the one thing I was look for, food.  I wasn’t looking for a hamburger, a sandwich or anything like that, just something to snack on.  I was hoping for donuts or cookies but they didn’t have any.  In fact they had nothing to eat, nada, zilch, not even a candy bar.  Eat before you go.

We asked one of the ladies working in the store if there was a shopping area nearby.  Not a mall but maybe a neighborhood of small shops and boutiques.  She gave directions to an area and off we went.

One the way to the shopping area we passed this house.  Of course you have to take a picture when you see something like this.  But there is a problem with the photo.  Hate is a very strong word that I think is used too often but I will say that I hate the way power lines of various sorts ruin so many pictures in an urban or suburban area.  I have passe up what I think would be really wonderful pictures (including one a few block from here) because there were just too many power lines ruining the shot. 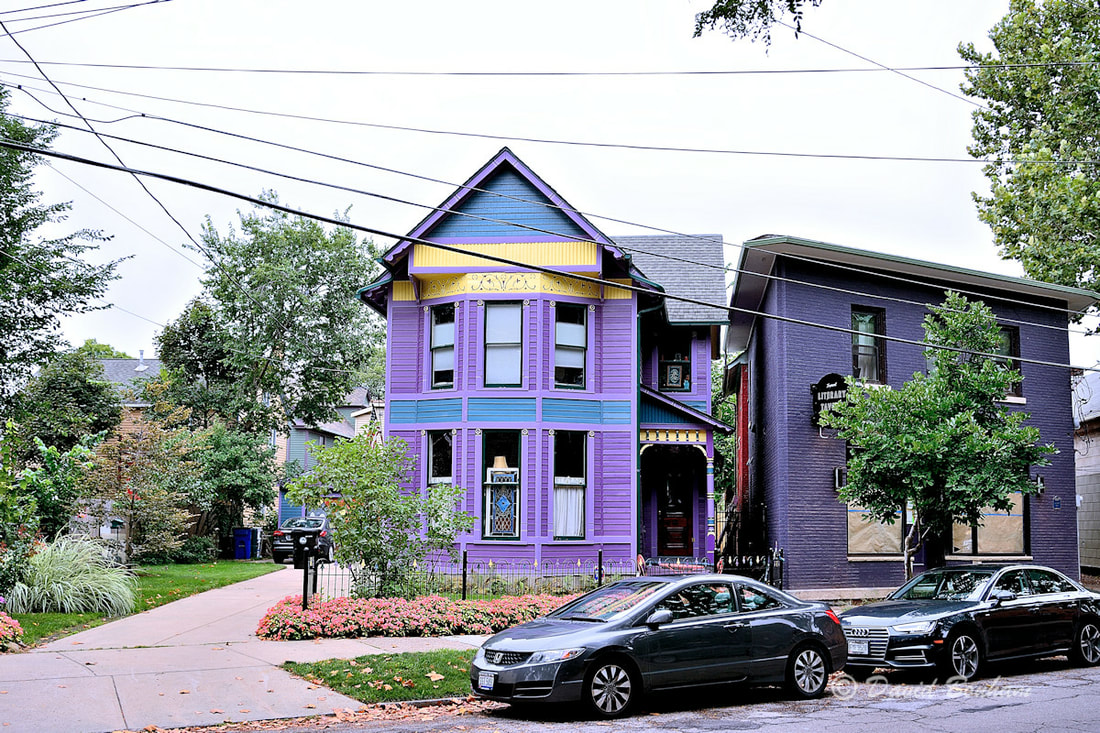 Here I got in closer, did a tight crop and because of the crop and had fewer power lines to contend with I took the time to clone out the lines, a task that would be much too tedious in the photo above.  In case you hadn’t noticed it yet, as with many of the photos in this post, I replaced a grey sky and washed out clouds with something more attractive. 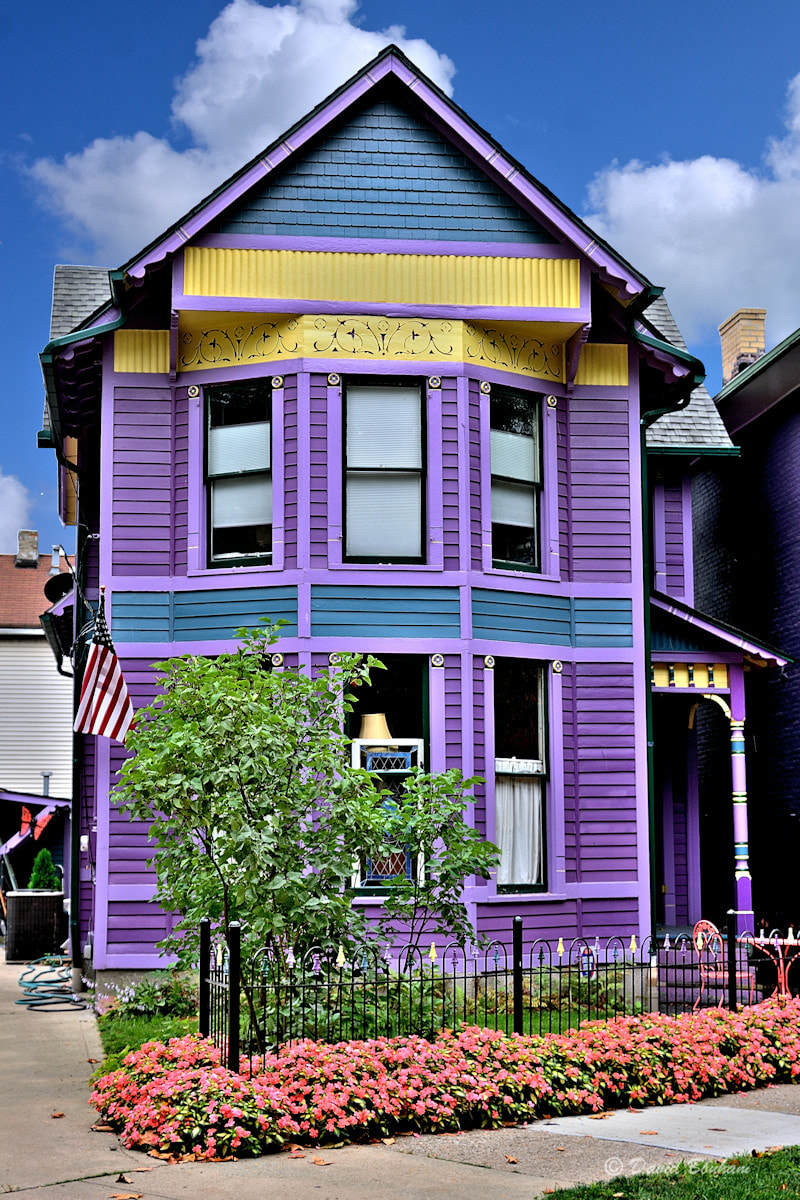 I love the name of this intersection.  I also love the mural on the apartment wall in the lower right. 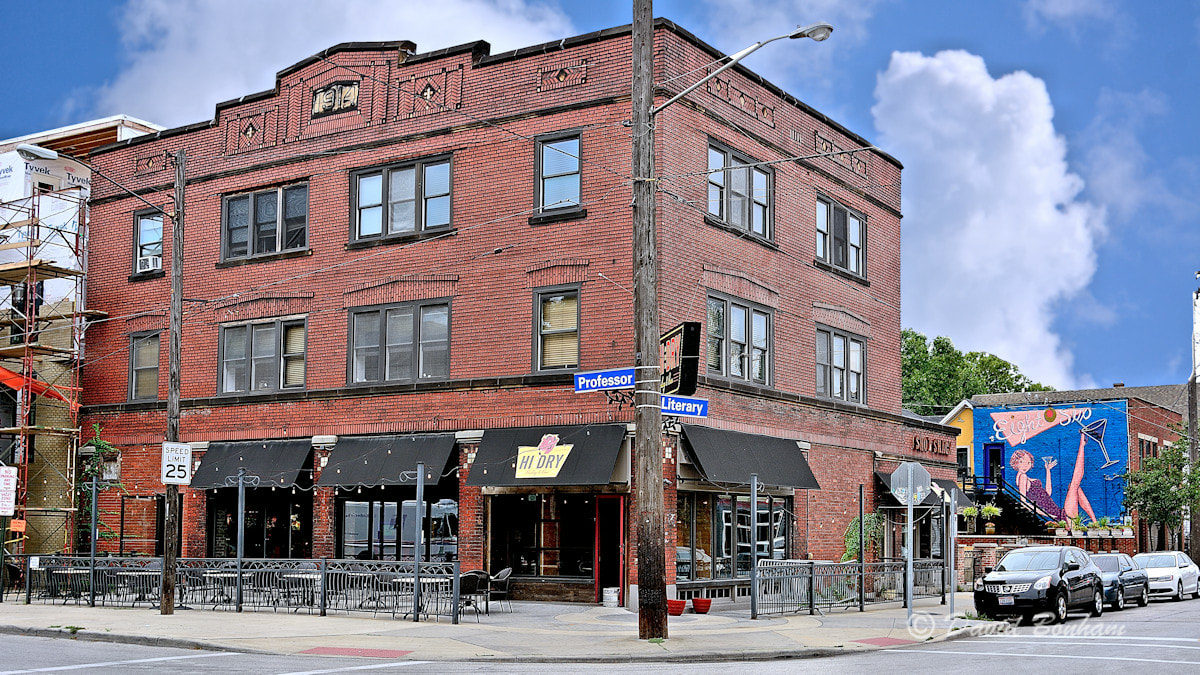 Here are a few close ups of the mural. 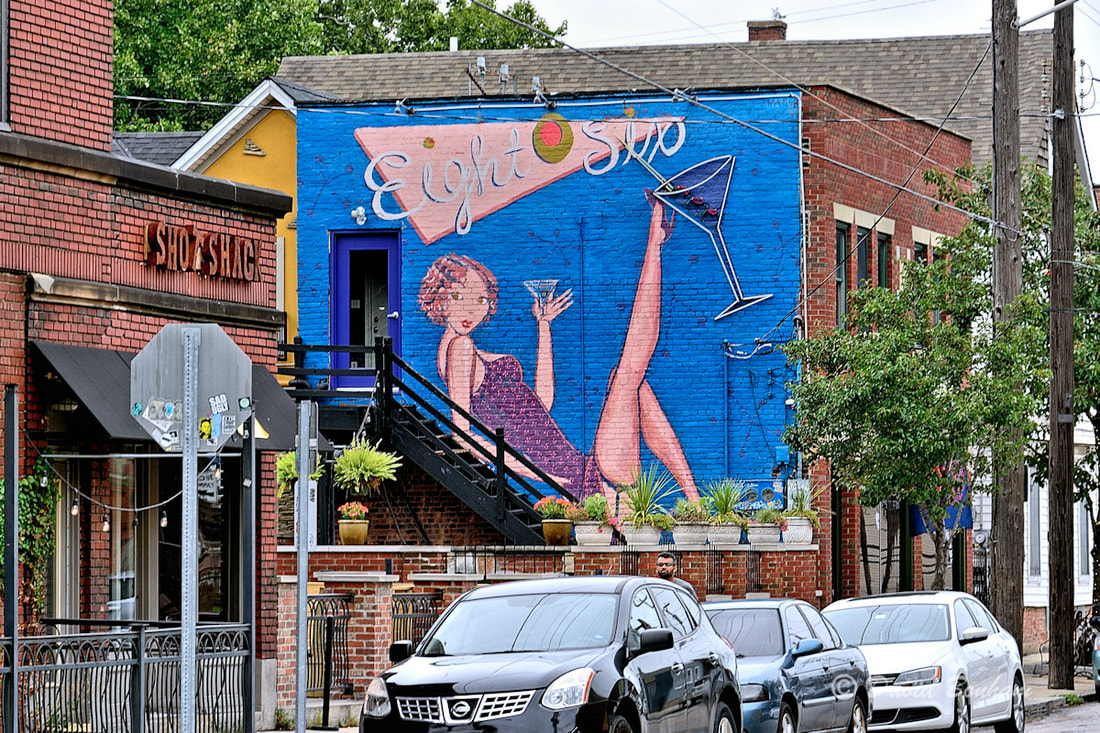 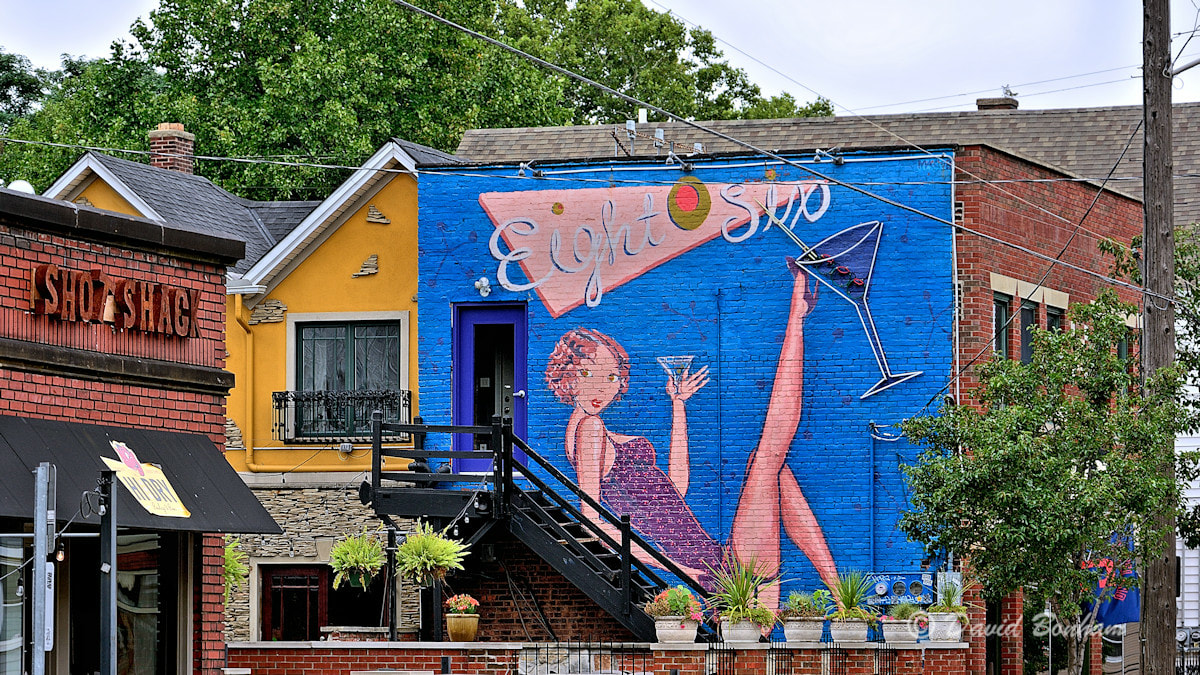 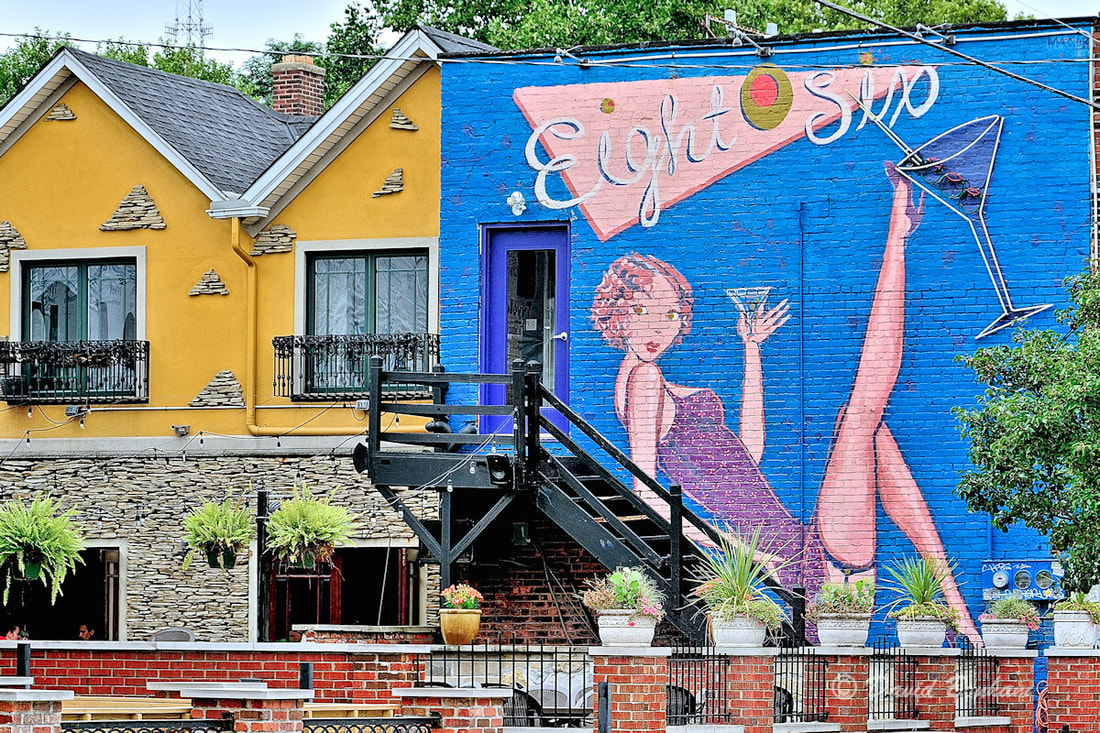 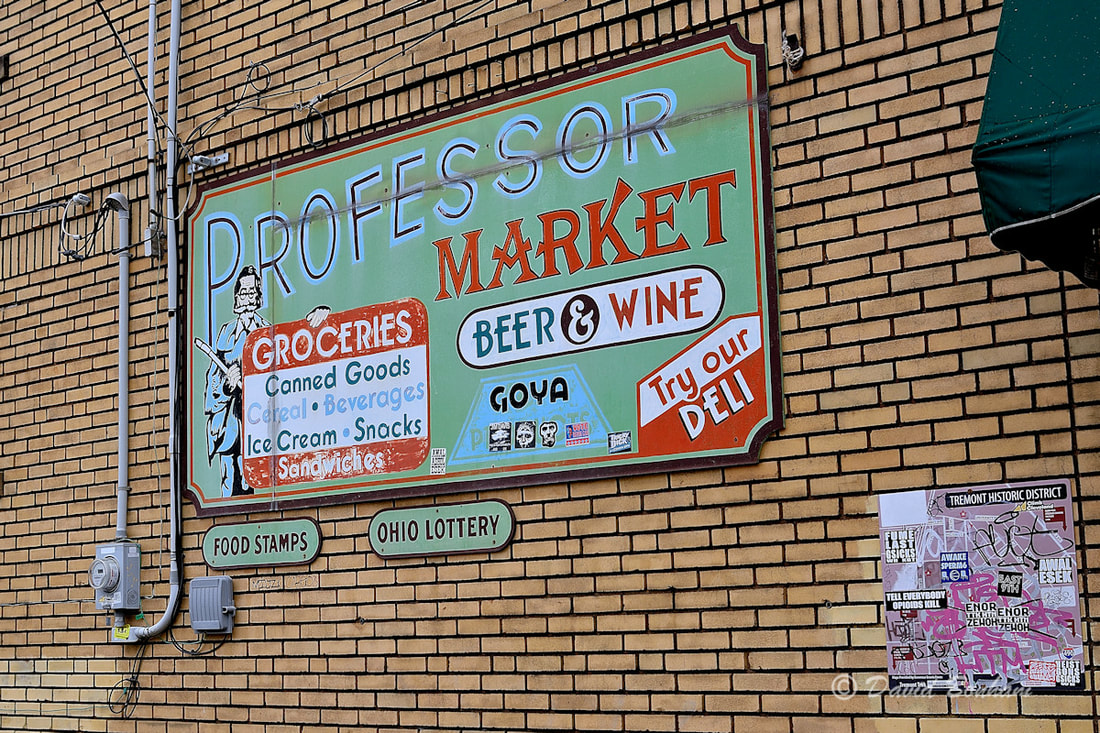 Centuries from now the big question in archeology will be how to distinguish in the findings of extant staples on telephone poles (similar to the one below) the number of staples that represent yard sales versus those that represent lost cats. 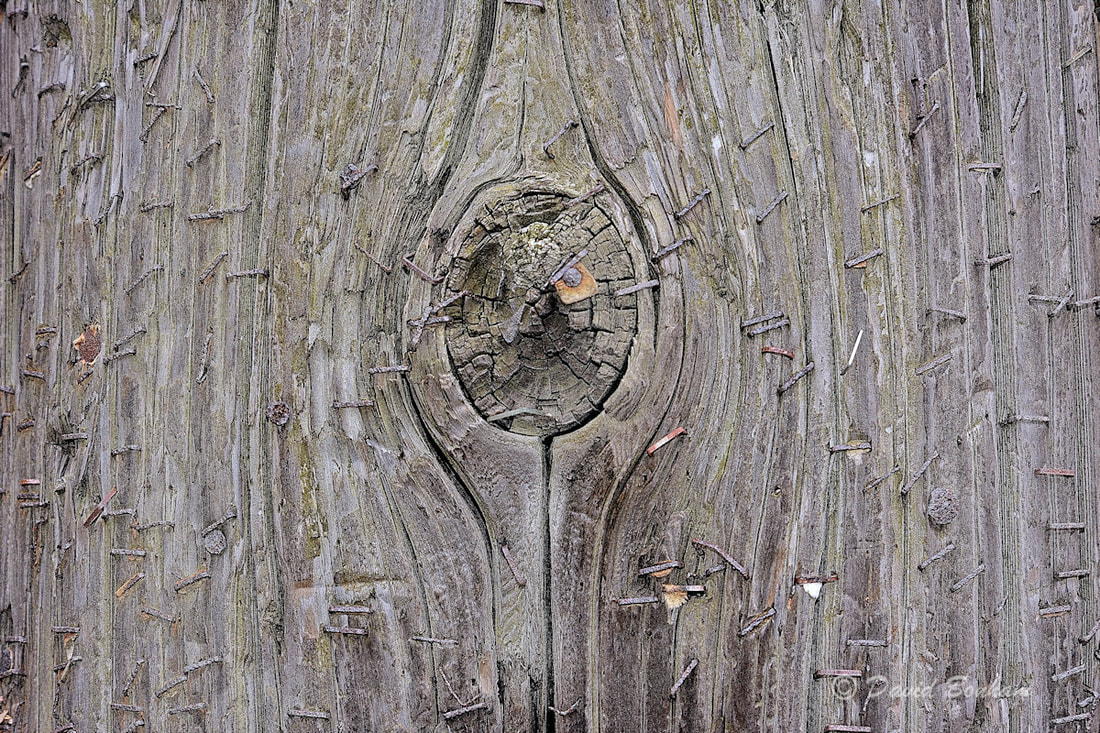 If you made it this far, thank you very much.