I have a bird bath about fifteen to twenty feet from the steps to my back door.  I started sitting on the steps with my 80-400mm telephoto zoom hoping to get some shots and I ended up having quite a few bird bath visitors last spring, including these house finches and a cardinal.

I believe this is a female house finch.  I just now noticed the partial reflection of her talon in the water.  It’s probably things like this that a good photographer would notice while shooting and then change angles to get a totally different shot; probably a much better more interesting shot.  Well, I’ve said it before and I’ll say it again, you do get what you pay for when you come here so let’s consider this a teaching moment for both of us. 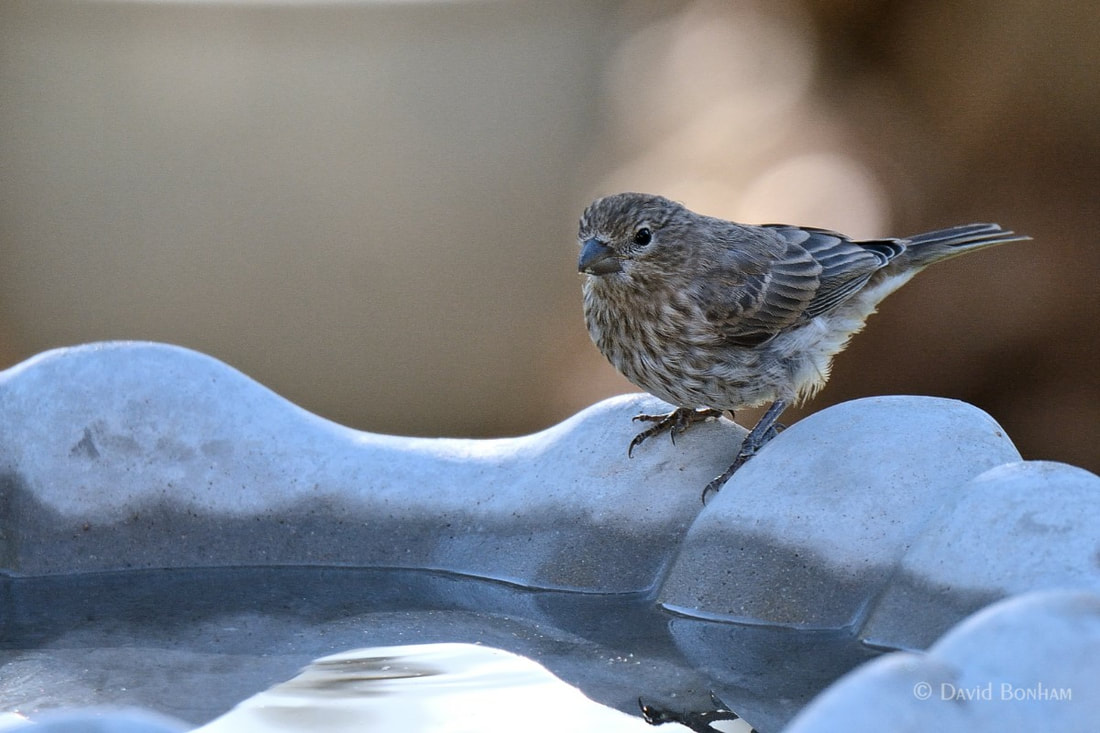 The female house finch with a male who has joined the picture but stepped out of the narrow plane of focus.  You know, some birds just cannot take direction.

You might notice the the left side of the bird feeder has something in it that the birds are standing on.  It’s a flat stepping stone I put in at an angle.  I added this because I saw that the birds this size were having a hard time bending over far enough from the edge to get a drink.  Originally I put a red brick in the center but all the birds stopped coming, even the robins.  I guess it not being a natural looking object they were afraid to come in the bath.  As soon as I put the stepping stone in business increased substantially and right away.

One other hint with regard to bird behavior around bird baths.  I planted three canna lilies on one “corner” of the bird bath just because I like them and knew they would get plenty of water as I clean the bath every three or four days.  The plants did great but once they got four to six inches taller than the bath the birds stopped coming.  I didn’t make the connection at first but after they got ten inches or so taller than the bath I thought I’d do some investigation.  Teaching moment #2:  Don’t block the view.  Turns out planting those canna lilies there was a no-no.  The birds want a clear view of sight for interlopers and predators, and a clear flight path in case the need to leave in a hurry. 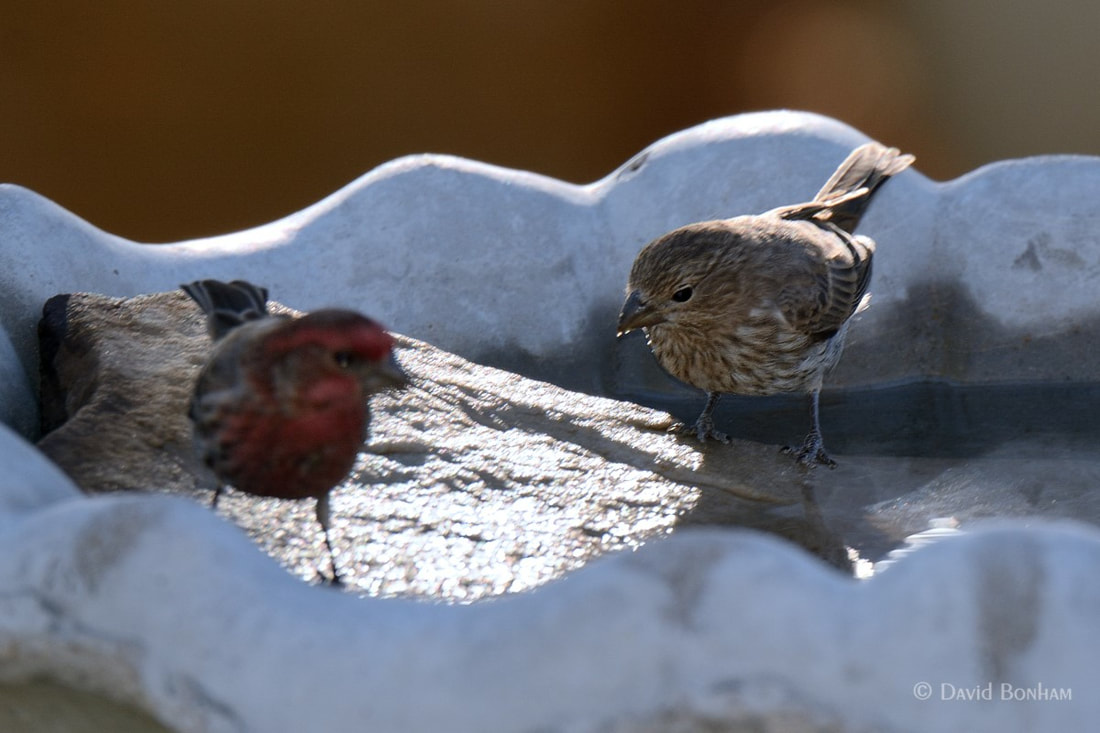 A shot of the male house finch by himself. 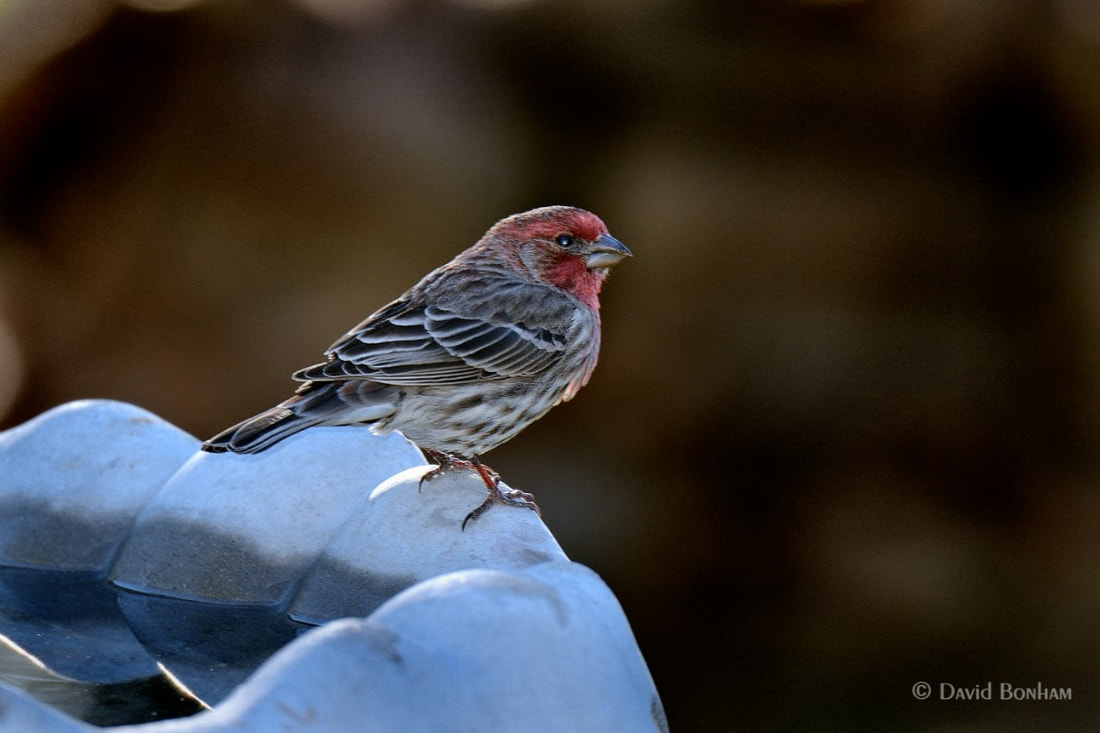 Cardinal sitting on the power line.  This a bit of a milestone photo for me as it is the first half way decent shot of a cardinal I’ve ever managed.  I don’t know but he seems kind of thin too me.  I’m too used to those photos of plump, bright red cardinals in the snow.  I’ve always wished I could get a photo like one of those.  I never will.  I don’t like photographing in the cold.  Actually I don’t like doing anything in the cold. 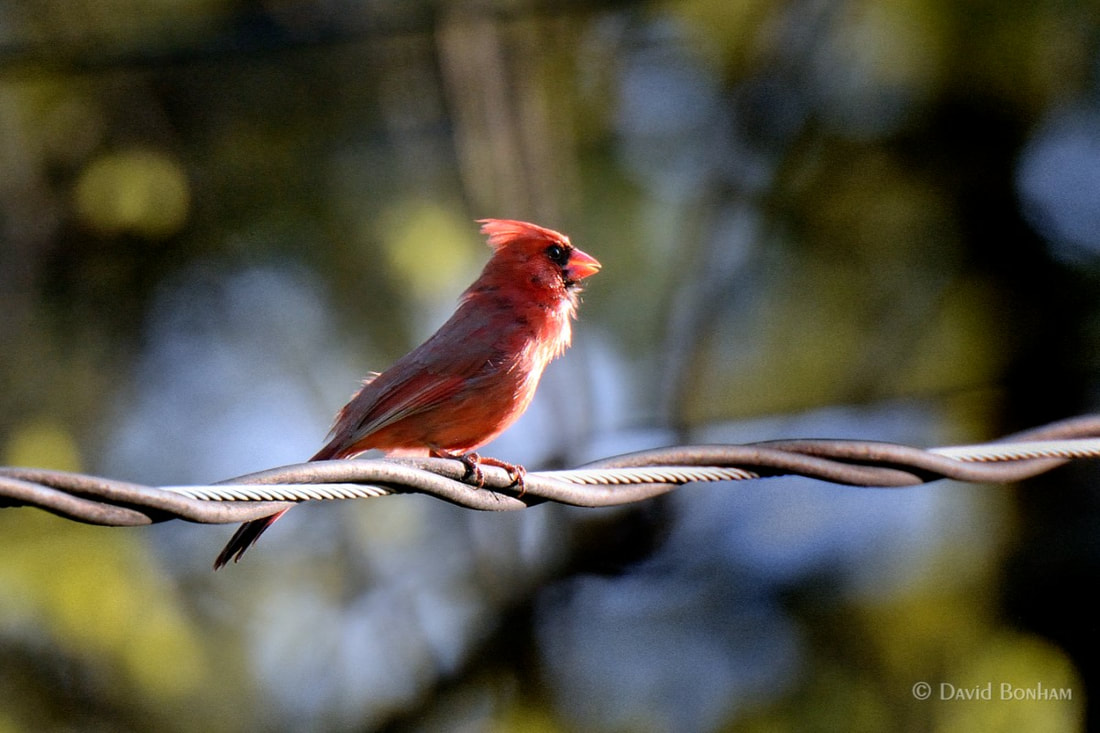 I put two small walnut pieces on the stone in the bird bath hoping it would help attract birds.  It did but this little bugger gabbed one before I was ready.  I barely caught him making his getaway.  Teaching moment #3:  Don’t be looking around just daydreaming while waiting for birds to come to your bird bath. 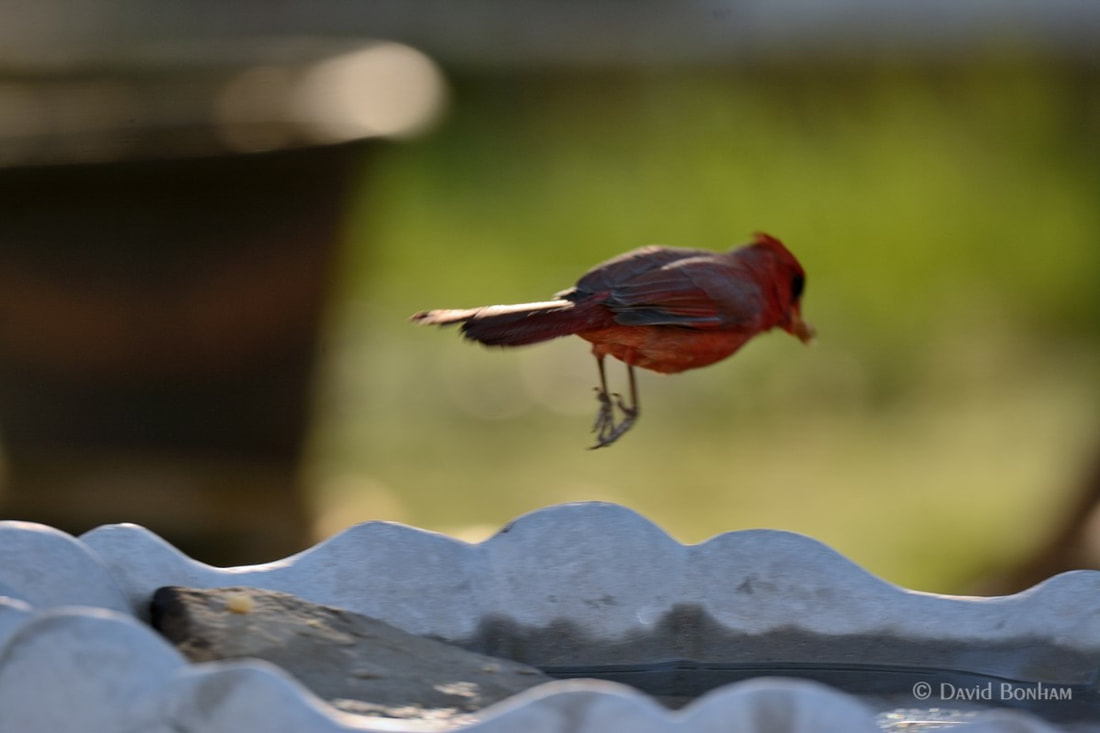 On my hi-res master file it’s pretty plain to see some of the walnut one the edge of his beak.

I know that this cardinal is the same one as the one above flying away but not sure if the same one as on the power line, two photos up.  This one looks a little fuller but the timing between the last two shots and the first was only seventeen minutes, and I don’t remember having two different male cardinals around. 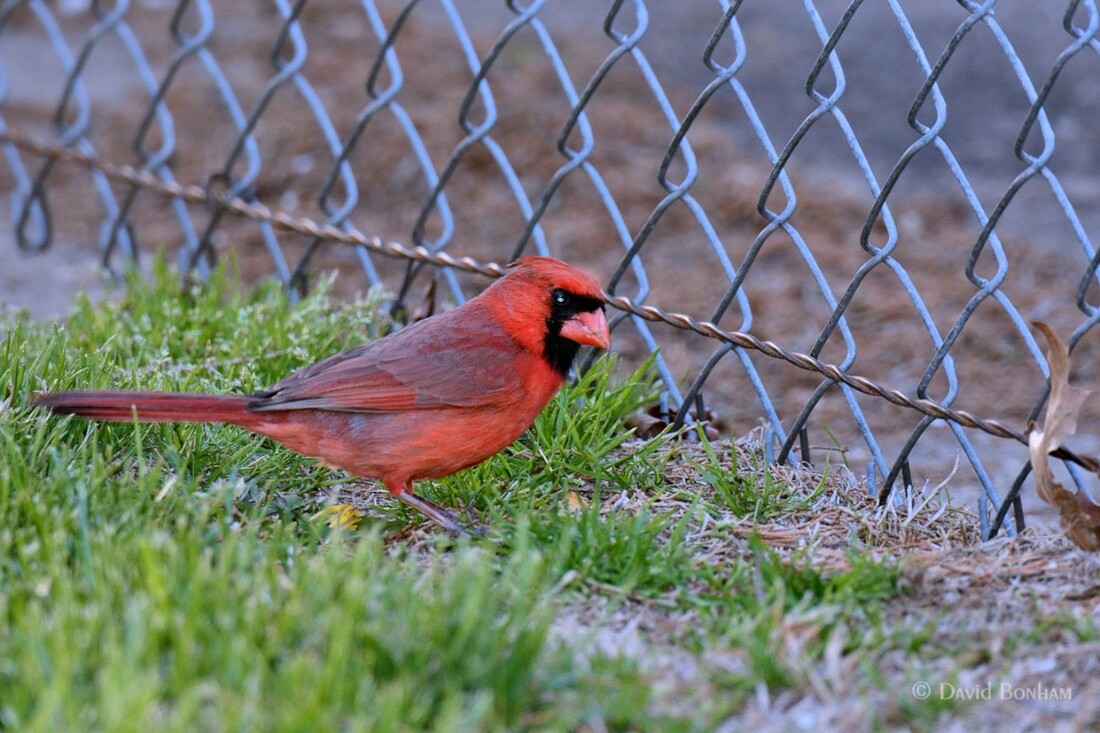 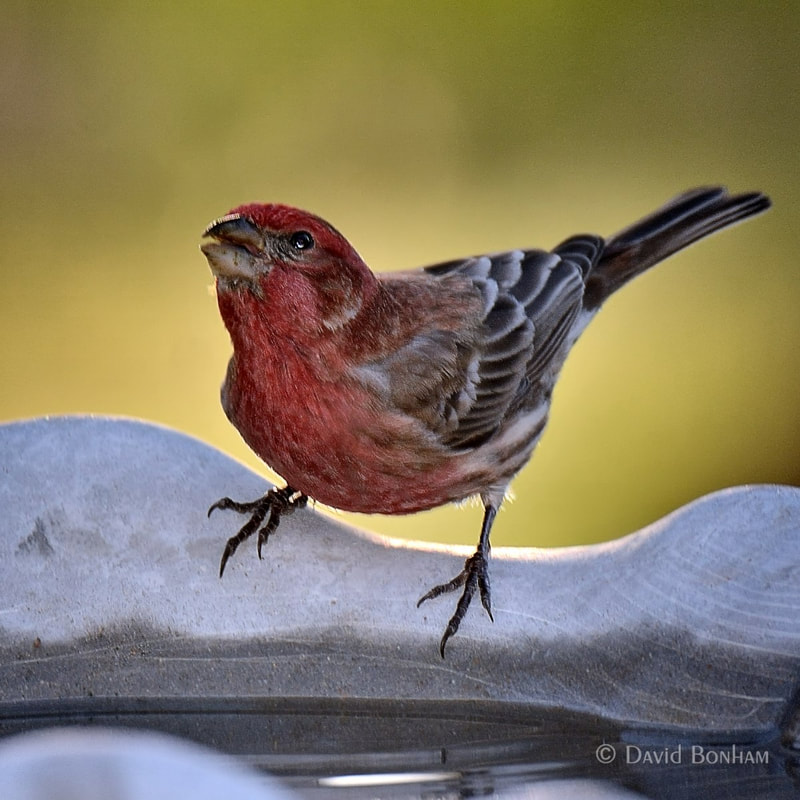 Just to be clear, I hadn’t planned on the teaching moments, they just came up.

Now, I’m not saying it will happen, but don’t rule out the possibility of a pop quiz before the school year is over.

P.S.  If there would be a pop quiz, and again I’m not saying there will be, it would be a fill in the blank or a one or two sentence response type of quiz.  There would only three or four possible questions so it’s no big deal that you would actually have to know the answer and not just guess a., b., or c., or True or False.  Yeah, there are no participation trophies on this blog.