Today is day 5 in the timeline for this road trip and our last day in South Dakota.  We’ll be driving down the western side of Wyoming as we head south toward Colorado Springs, Colorado.  At breakfast my friend B and I tried to figure out how we can visit Devil’s Tower before we head south.  He seemed almost obsessed about it.  He was forming his scrambled eggs into the Devil’s Tower shape and, now that I think about it, he was doing the same thing with his mashed potatoes at dinner the night before.

According to Google, Devil’s Tower is only about an hour and a half away, but it’s northwest of here so we’d be adding three hours to our trip today – can’t do that.  Our next thought was since Mount Rushmore is southwest of here, the basic direction we’re going, why not give it one last try.  I mean that was our primary objective coming here.  So what if it adds another hour or so to today’s drive.  So that was our game plan for today:  Mount Rushmore (with our fingers crossed) and then Colorado Springs.

We got to Rushmore just before 10:00 AM and as luck would have it … it was all blue sky and white clouds. 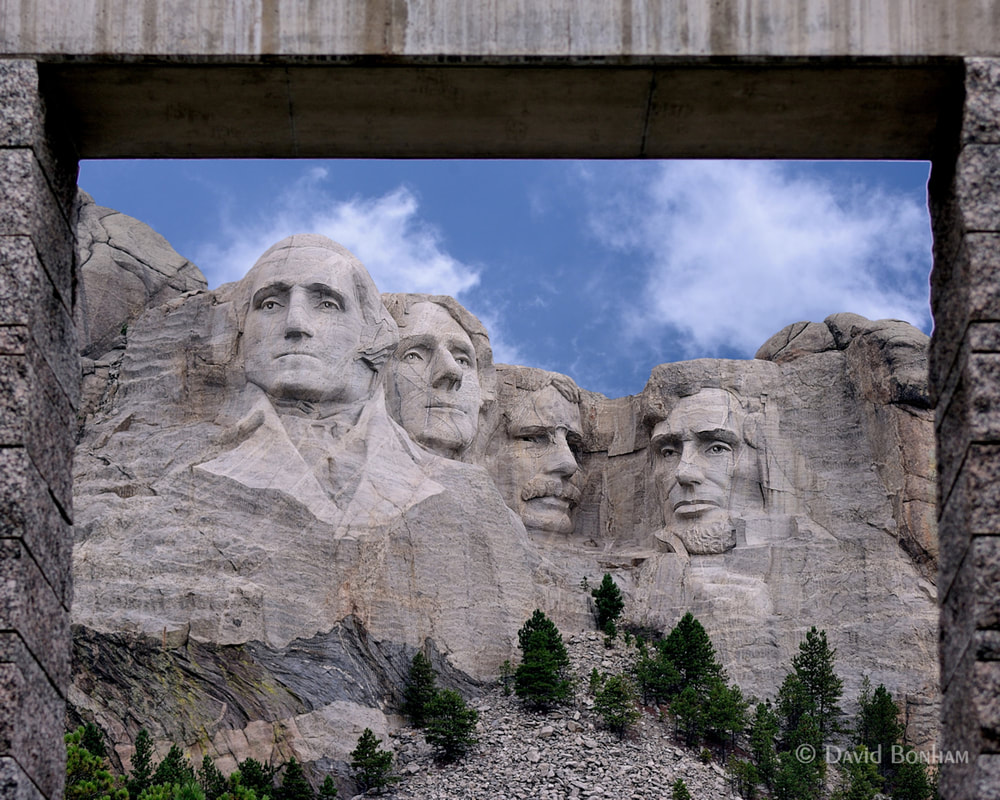 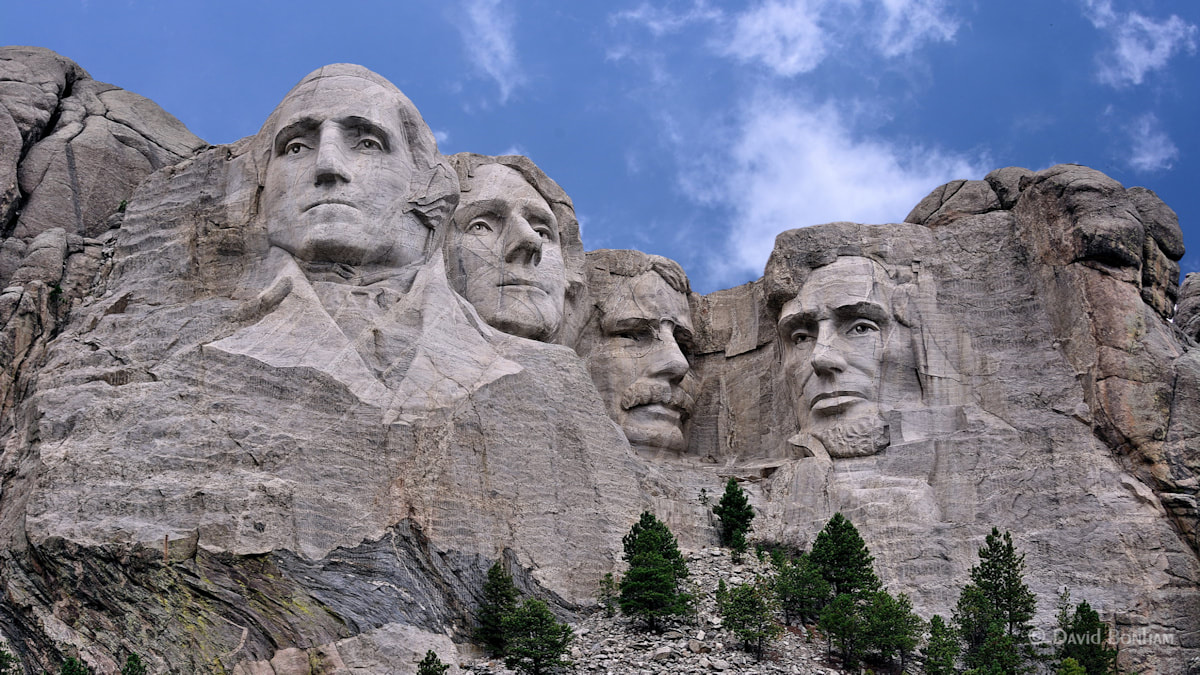 With these next two shots I took advantage of all 400mm of my 80-400mm telephoto zoom lens.  As a reminder, on my complicated Nikon D7100 crop sensor camera the 80-400mm focal length produces the same field of view as a 160-600mm lens would give you with a film 35mm camera or a full frame digital camera. 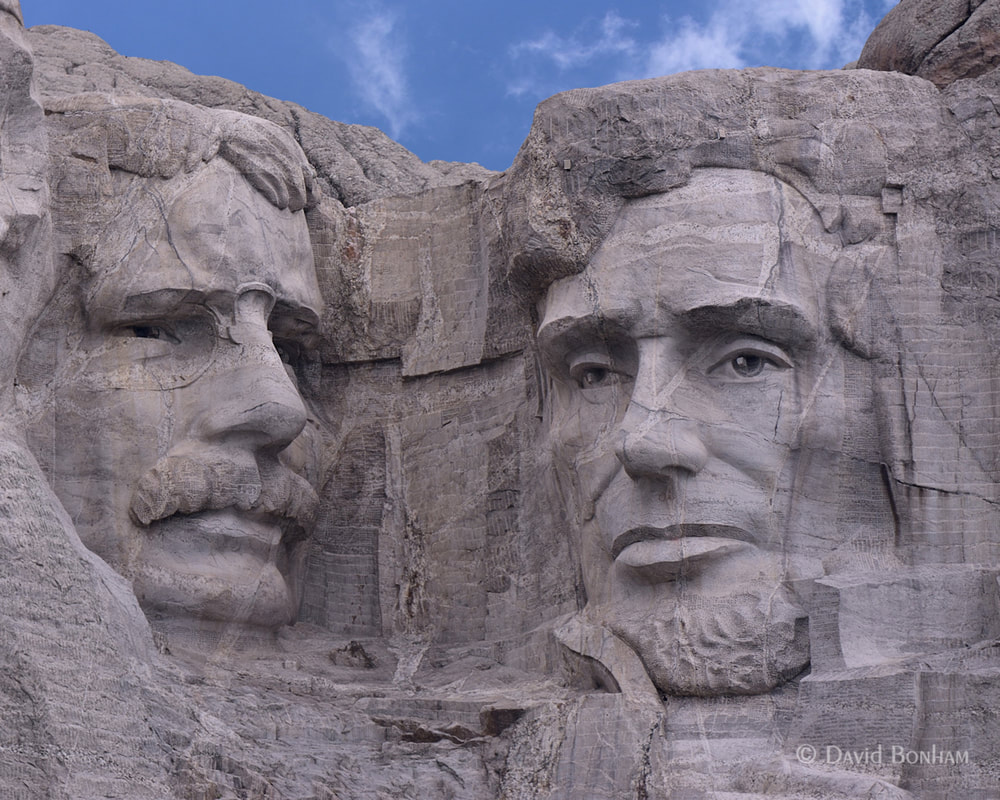 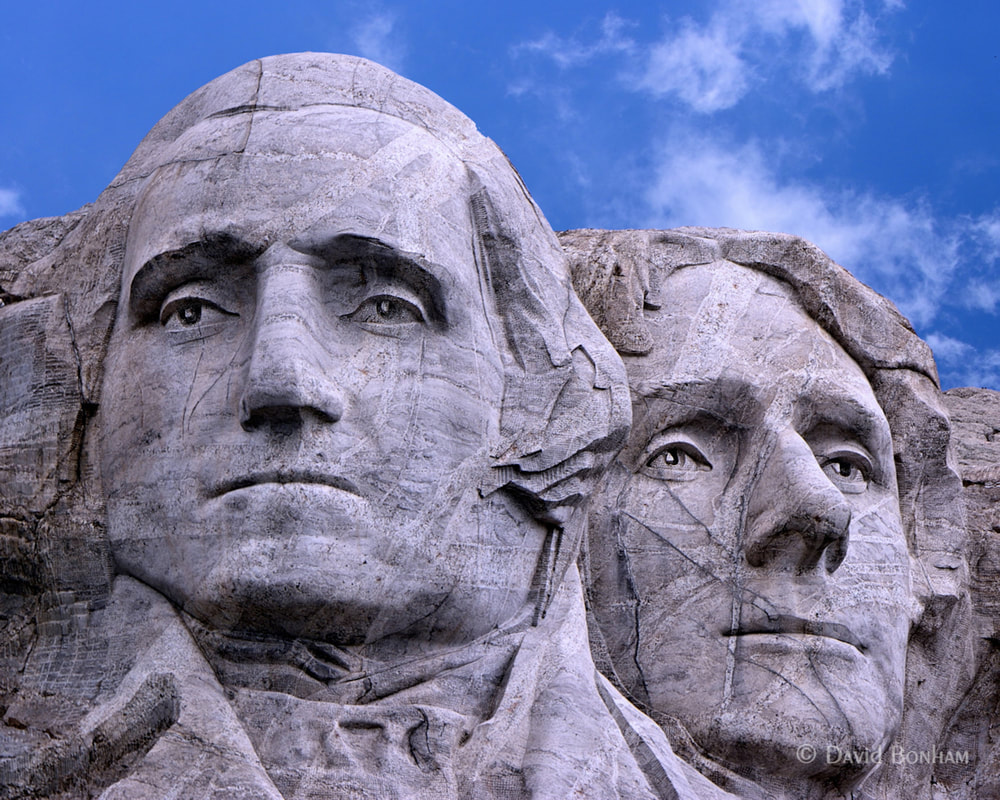 I thought the drive down the eastern side of Wyoming was fantastic.  I had never seen country like this and wish I could have had B pull the car over a dozen times or so so I could take pictures.  It was just an enormous area of flat land mixed with small rolling hills.  At one point, way off to the west, I saw what appeared to be a mesa coming up out of the very distant hills with nothing but flat land in front of it.  It was September and the crops were in.  It appears that these miles and miles of vastness had been cover with hay in many areas and maybe wheat in other places.  I could envisions that in the 19th century, and maybe even into the early part of the 20th century, these hundred of miles covered in prairie grass as far as the eye could see.

Another cool thing about driving down the east side of Wyoming was that we got to go through the town of Bill, Wyoming.  What’s so special about Bill?  The sign said Bill, Population 10.  I remember when I first moved to the St. Louis area a family at the bottom of the hill on our street had ten kids.  Add in the parents and the grandmother and their house had more people than the entire population of a town in Wyoming.  The link to Wikipedia at the end of this sentence gives some interesting information on how the town got its name, and explains how the town doubled in population to 10 after the turn of the 21st century.  Bill, Wyoming

We made it to Colorado Springs and our hotel with no problems.  From the beginning I was much more in favor of stopping here on the first leg of our two day trip home from Rapid City, South Dakota.  I had been to Denver a couple of times for business and to me it was just another city, except it had beautiful mountain view on its west side.   On my last trip to Denver I finished my work earlier than I had anticipated.  Instead of leaving for the airport around 3:00 PM on Wednesday (a day earlier than planned), I could leave at about the same time a day later.

Rather than trying to switch my flight plans I switched my hotel reservations and drove the rental car down to Colorado Springs to spend the night and visit Pike’s Peak the next morning.  I figured I’d be done by no later than 1:00 PM and that would give me plenty of time to drive back to Denver and catch my flight home.  I drove up Pike’s Peak, periodically one handed, as I held my S-VHS compact video camera in the other hand.  Compact back then was not what compact is today.

I was looking forward to going up again on this trip but it wasn’t looking promising.  After dinner the night of our arrival in Colorado Springs my friend B wasn’t sure he wanted to drive up the mountain.  I told him I had done it in the late 70s and didn’t think it was bad at all.  I even mentioned the one handed thing.  I told him the only bad part I remembered was a small section of gravel road were I probably should have had two hands on the wheel more than I did.  He still wasn’t too sure but he did suggest we go to Garden of the Gods, something he saw in a brochure.  We all agreed that it looked interesting.  After breakfast we would head there and then just wing it for the rest of the day.

Garden of the Gods was pretty cool.  It consists of red sandstone rock formations (some as high as 300 feet) that you can walk around on wide blacktop paths.  Like Custer State Park in South Dakota, this unplanned adventure turned out to be a very pleasant surprise.  In addition to the rock formations there is beautiful mountain scenery to view as you walk the west side of the park. 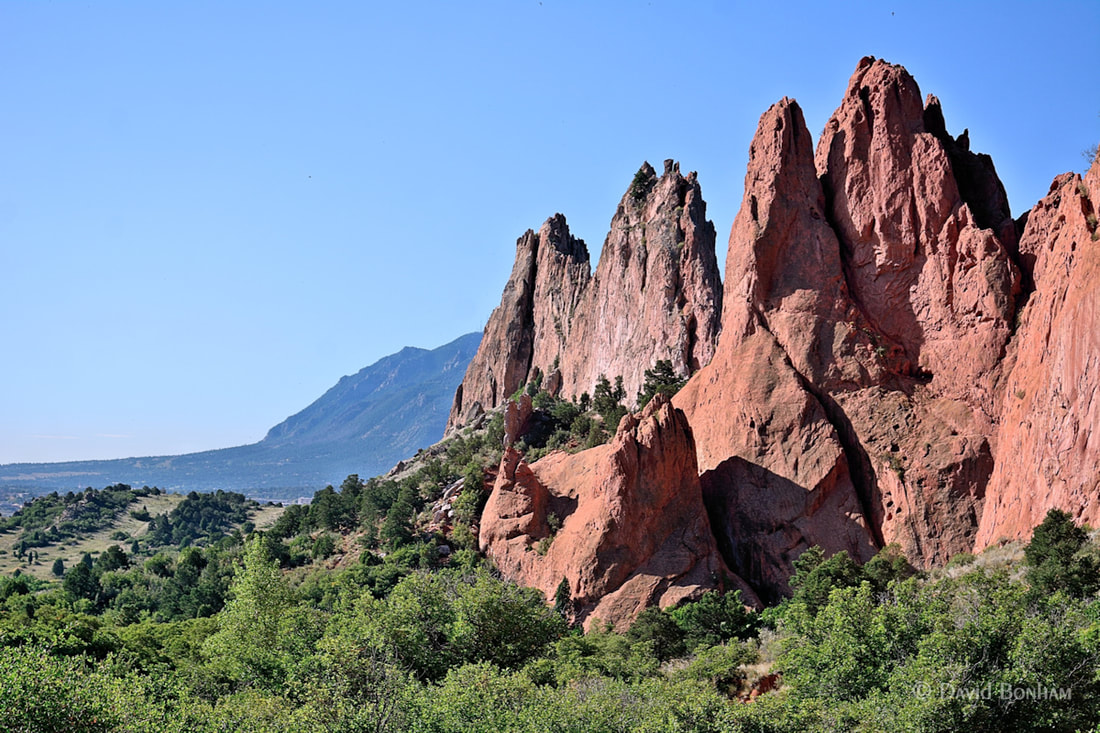 This formation is called kissing camels. 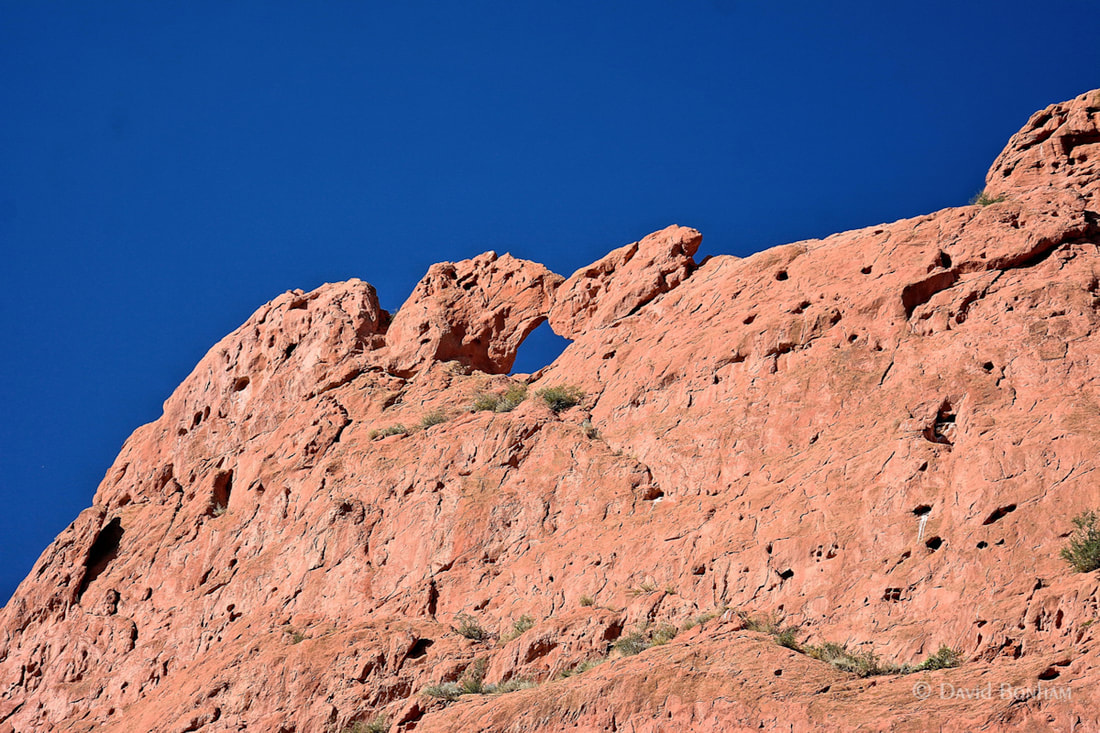 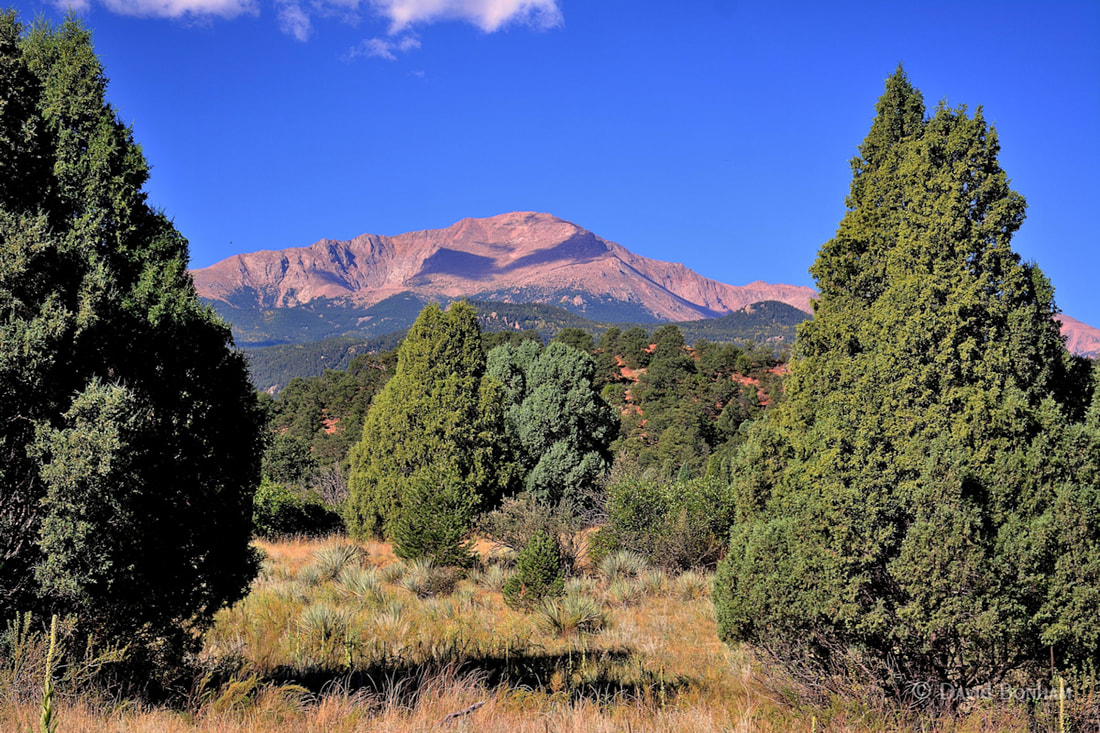 On the lower right you can see some switchbacks for the road that goes up the mountain. 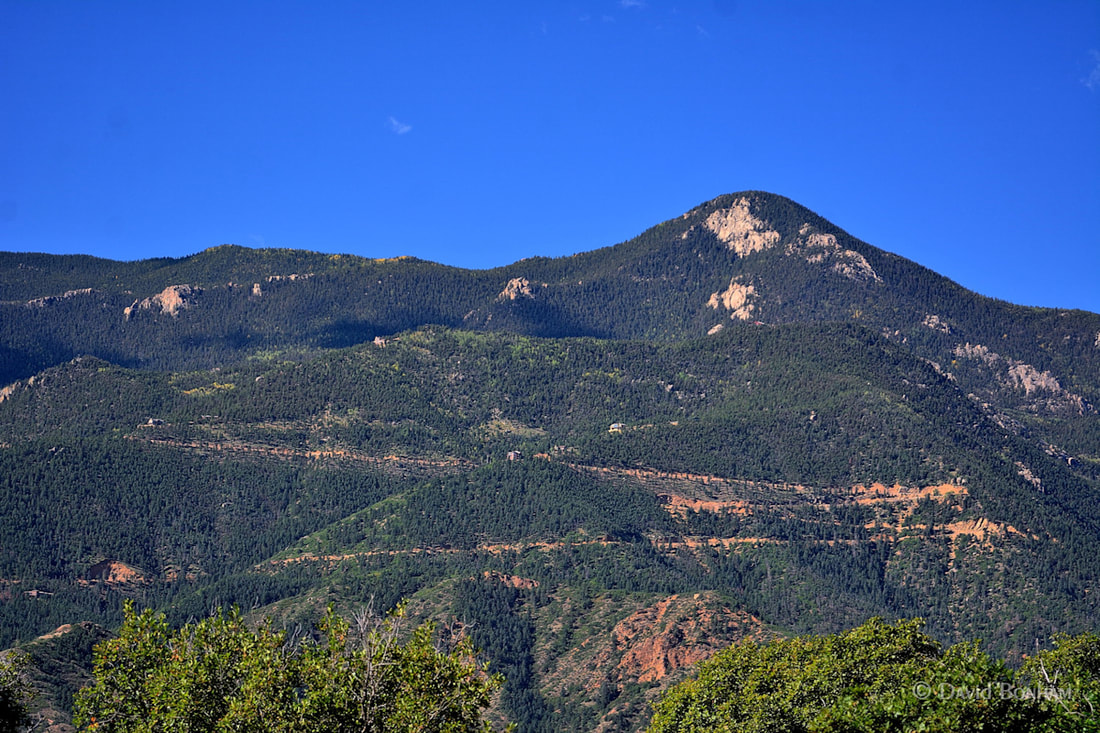 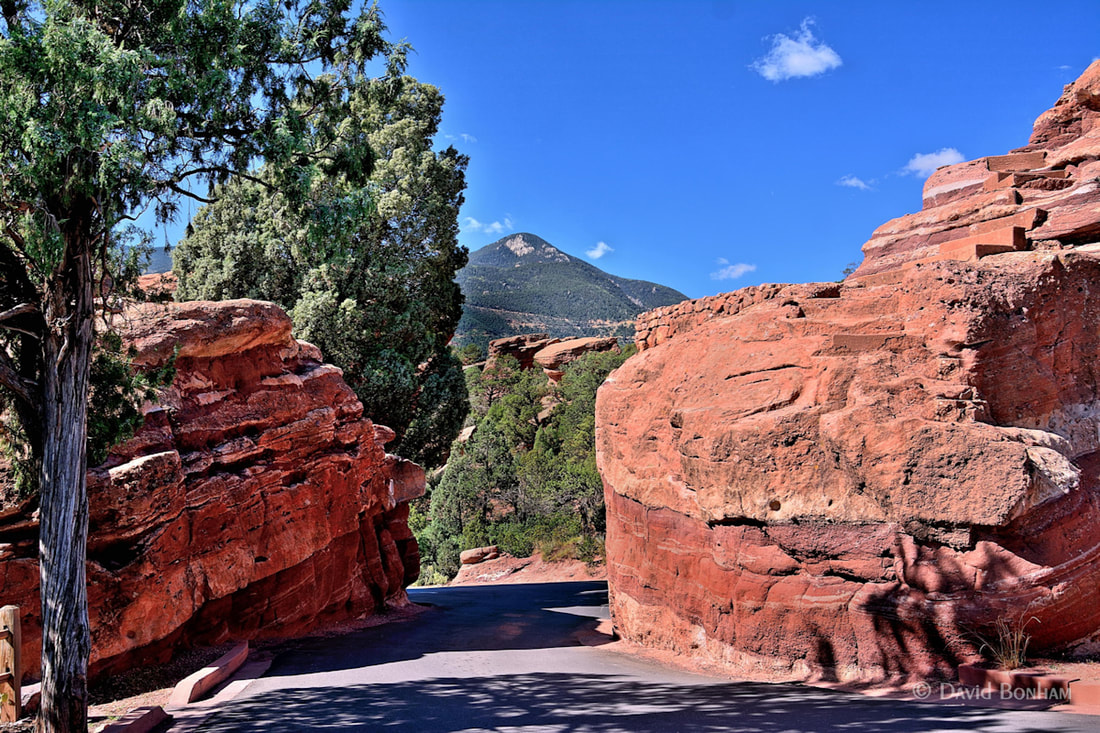 After our visit to the garden it was getting close to lunch time.  We talked about Pike’s Peak again and B decided he and his car were up to the driving challenge.  We finished lunch and headed off to Pike’s Peak.  The first few miles was just an almost level drive through a heavily wooded area.  Below is the first scenic vista we came too. 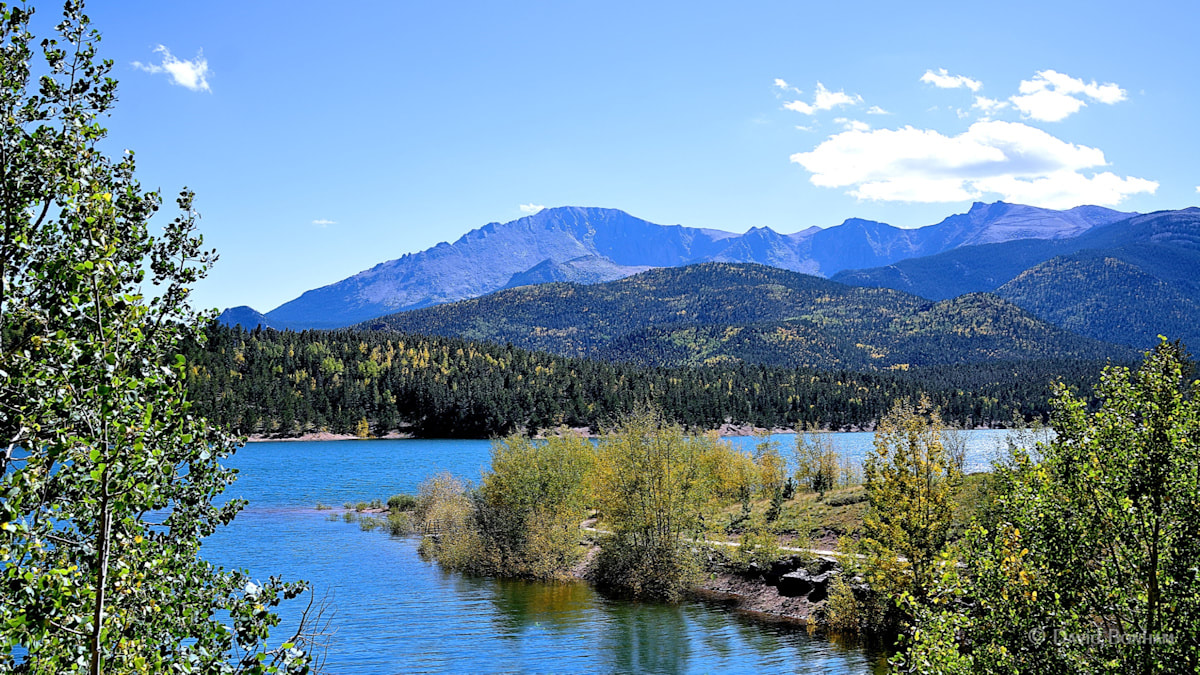 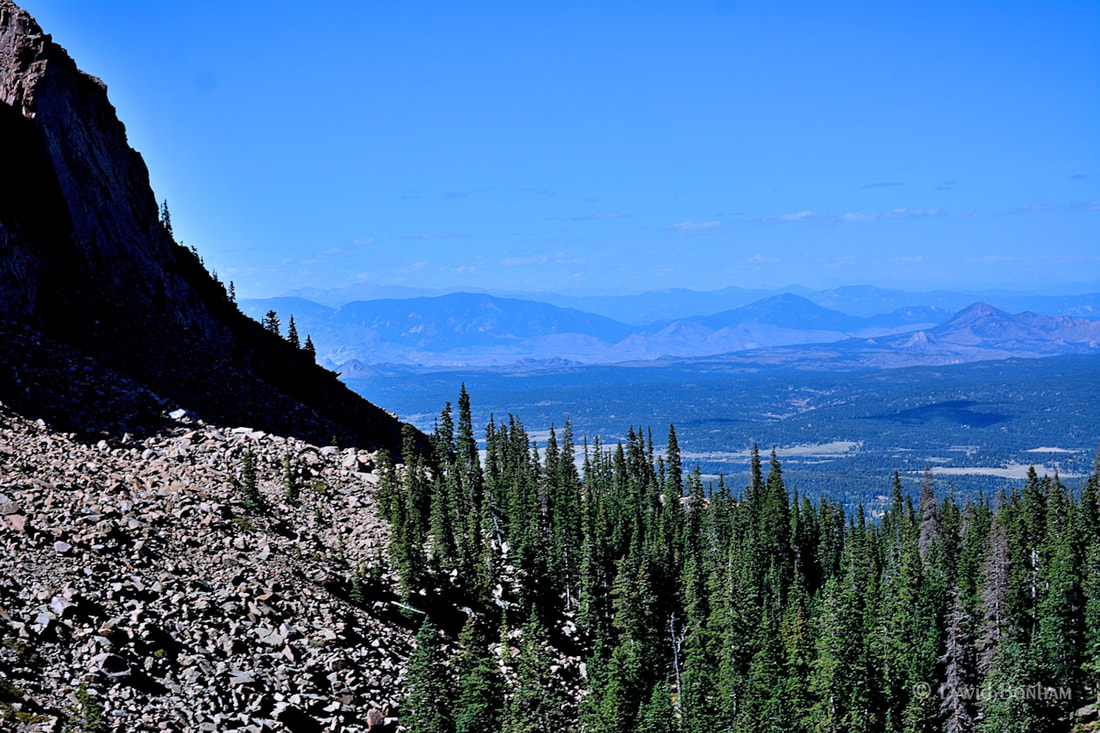 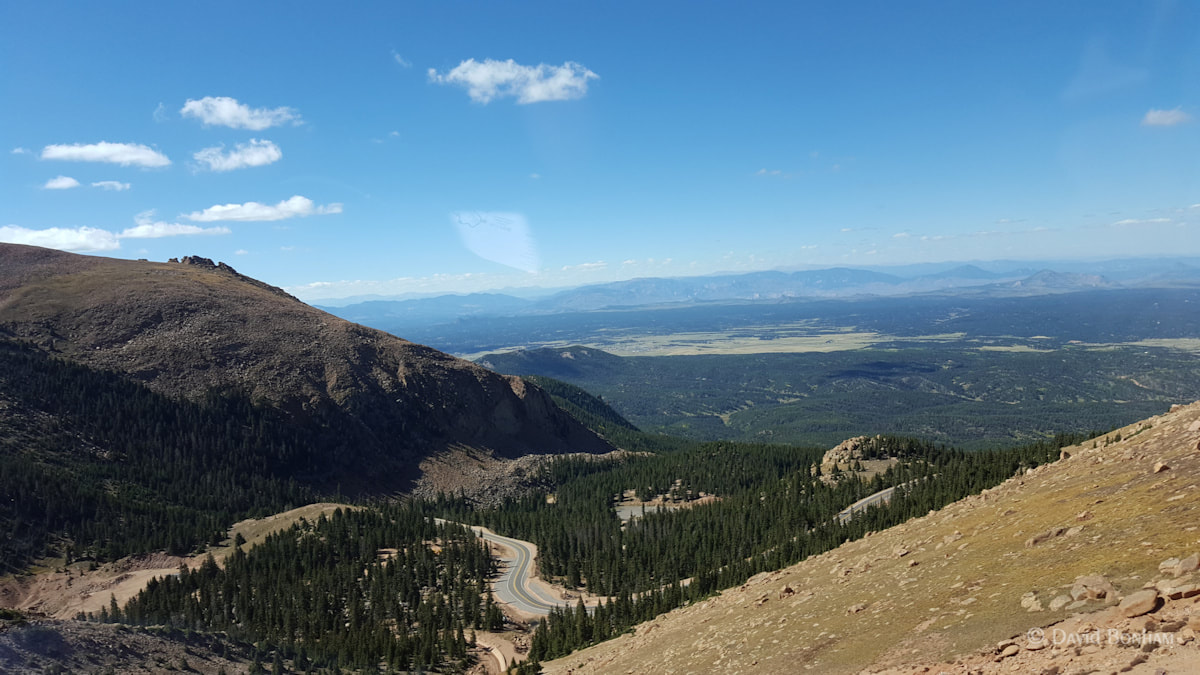 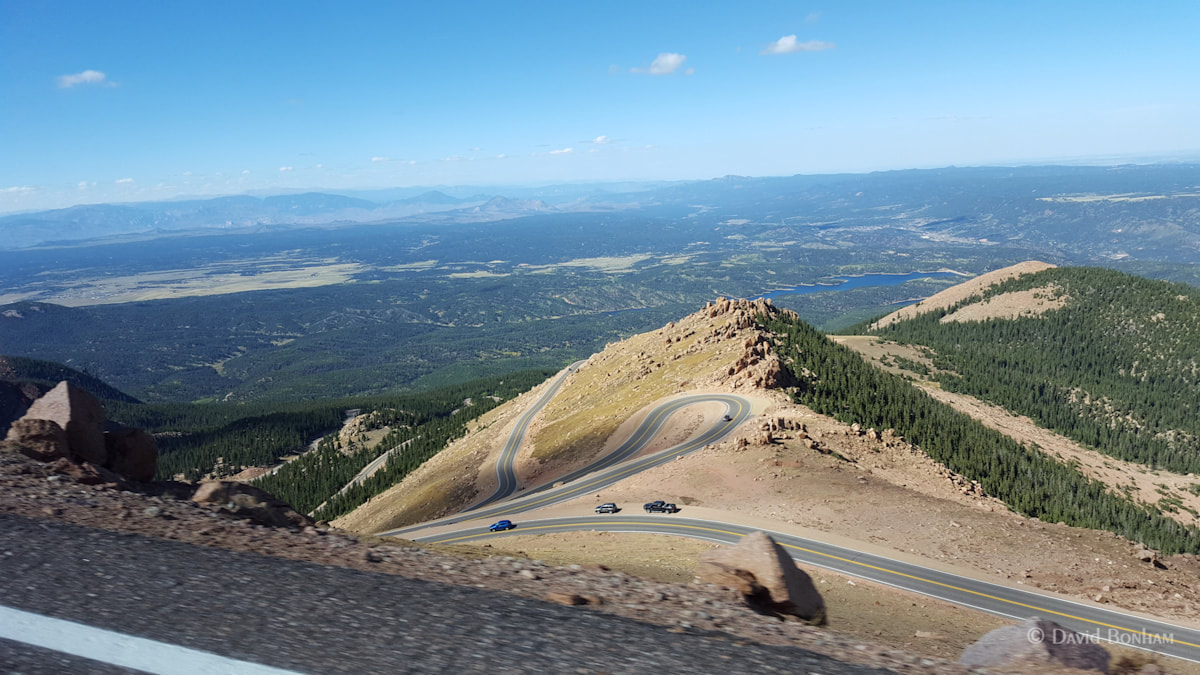 This is taken from very near the top. 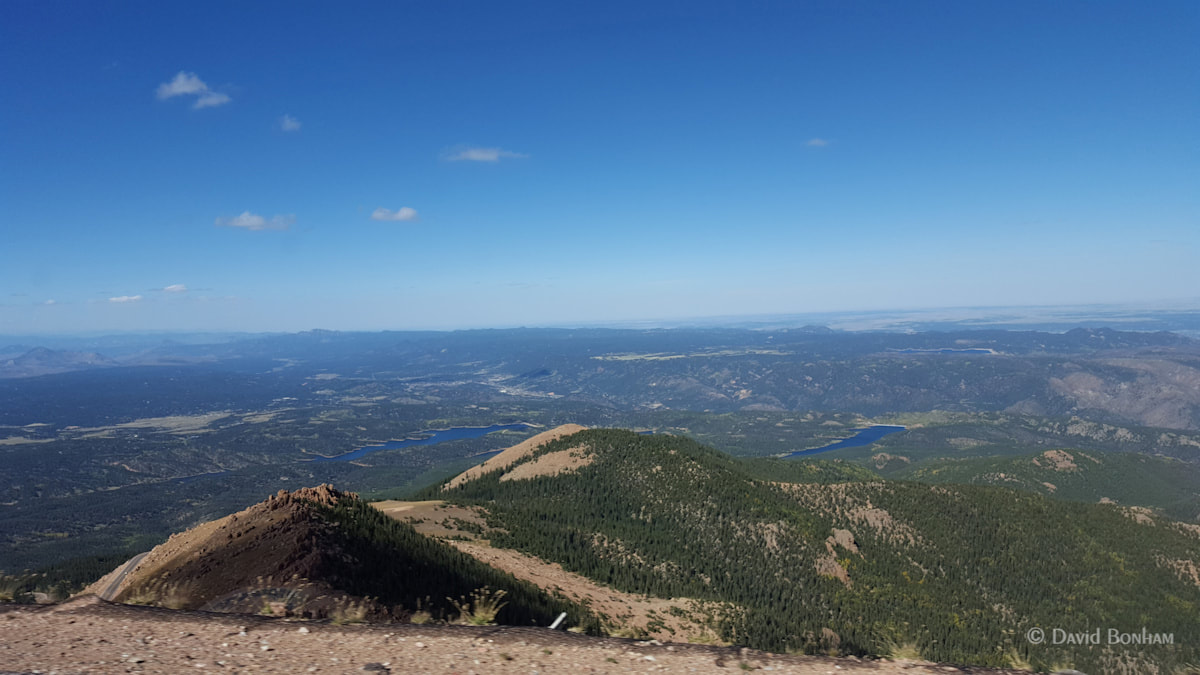 These last two photos were taken form the top of Pike’s Peak. 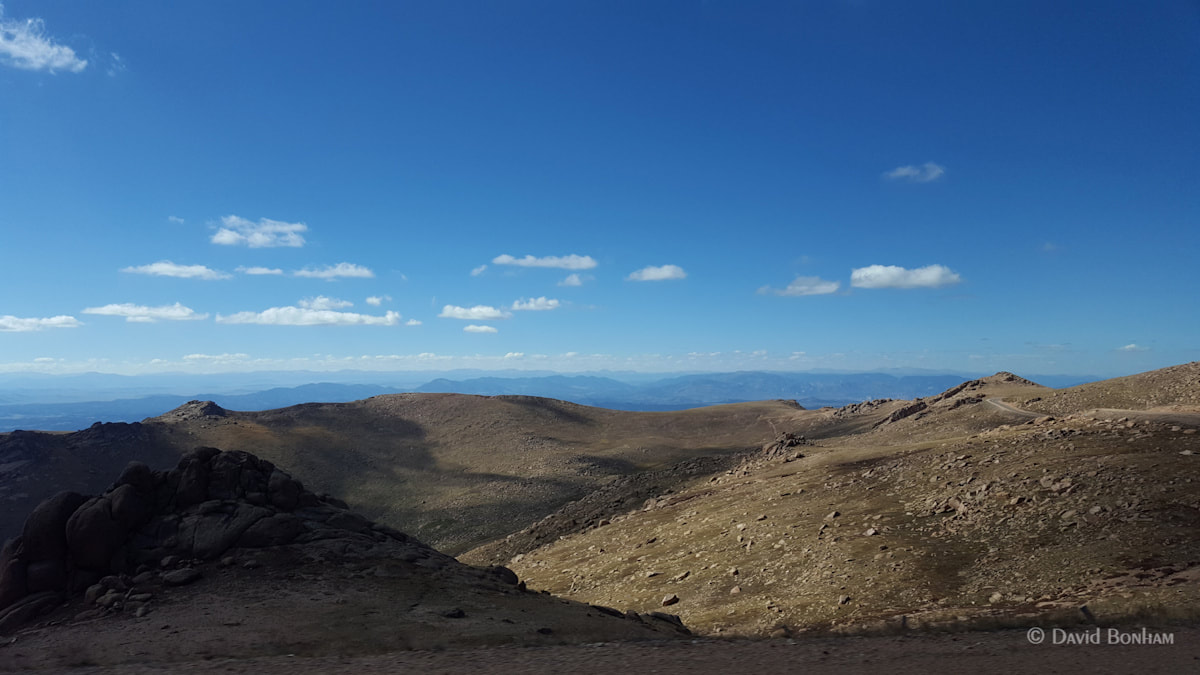 This is looking NNE from the top.  That is one of the cog railroad cars that will take you up and down the mountain … if you have the nerve.  We didn’t.  I’ve since discovered that the railroad didn’t reopen the following season because “… the railroad has undergone a major evaluation and it has been determined that the infrastructure and equipment has run its course.” 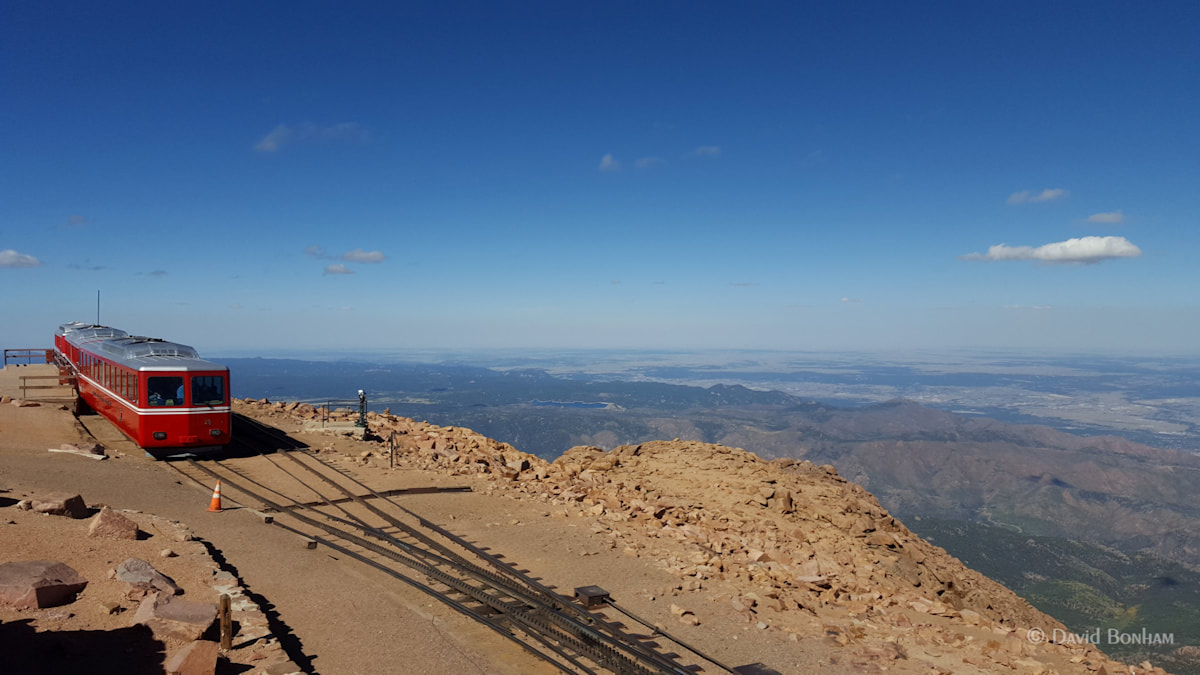 I guess I should give you some facts about Pike’s Peak.  Curious minds always like to know.  This info is from Wikipedia’s Pike’s Peak page.

That was the last of our adventures on this great road trip.  Well, before leaving we did find a pretty good shopping area in nearby Old Colorado City and in our overnight in Salina, Kansas we found a remarkable family style (i. e., not upscale decor, attitude, or prices but upscale food quality) Italian restaurant.  The offered a St. Louis style pizza.  I didn’t believe them because too many people think St. Louis style just means a thin crust, but it’s more than that.  Despite what the menu may say, not all thin crust are St. Louis style.  For some reason I ordered the pizza even though the rigatoni carbonara  was calling my name.  It tasted just like a pizza you’d get on The Hill in St. Louis or in any other Italian restaurant in St. Louis. 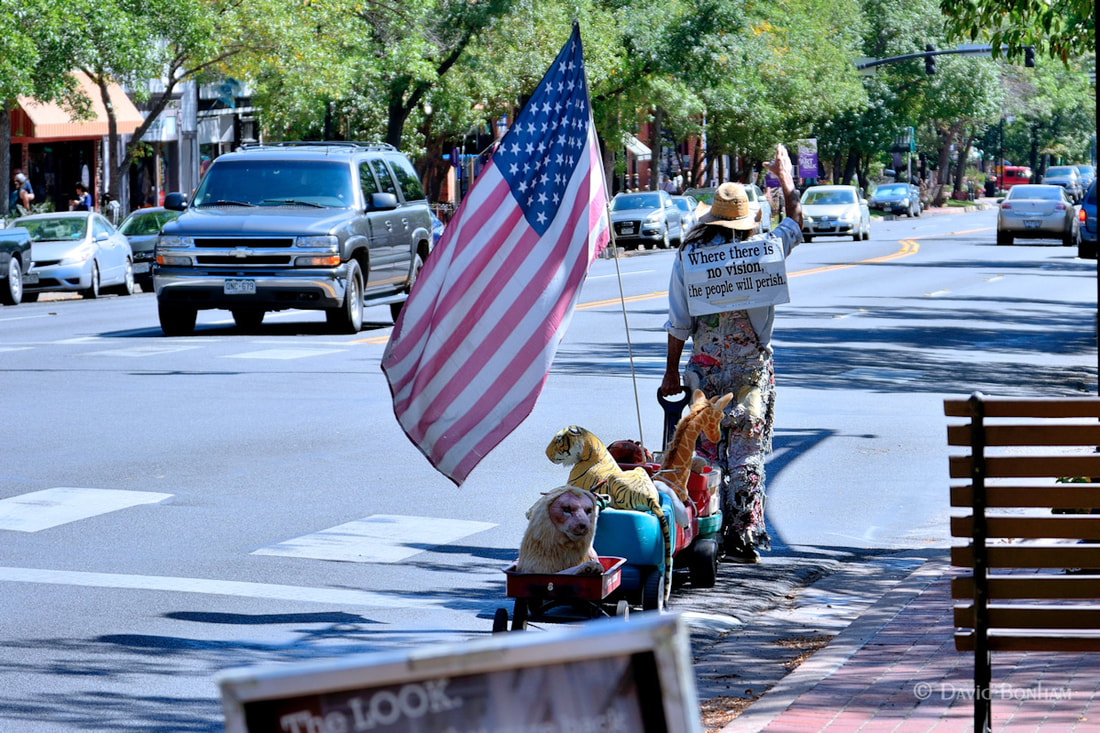 The last leg of the trip home entailed traveling through the eastern third of Colorado and the total width with of Kansas and of Missouri.  A rather anticlimactic two days on the road compared to what had gone on before.