It’s day 2 of our trip and we’re waking up in Sioux City, Iowa.  We drove about 530 miles yesterday with a straight shot due west from St. Louis to Kansas City, Missouri where we made a right turn and headed north to this morning’s location.  Today’s goal is to get to Rapid City, South Dakota where we will spend two nights and visit our primary objective of the trip:  Mount Rushmore.

So far on this trip we have crossed the Missouri River five times; three times in Missouri and twice in Iowa (when we crossed over and back to see Omaha, Nebraska) but our route no longer follows the Missouri.  About 20 miles NW of Sioux City is a small town called Elk Point, South Dakota where I-29 and the Missouri River part their ways.  Interstate 29 veers off from its NW course and heads straight north to I-90 which is a major east-west corridor in this part of the country.  The Missouri also alters its course here and turns westerly for a while before changing back to its NW direction and crosses I-90 at Oacoma and Chamberlain, SD.  This is about half way between Sioux City and Rapid City which means we’ll get to cross the Missouri one more time.

So far we have pretty much been following the trail of the Lewis and Clark Expedition as I-70 in Missouri and I-29 in Iowa tend to follow the Missouri River, but obviously in a much straighter course.  As we traveled I-29 north up the far western side of Iowa I was stuck by how level the country was compared to the route we had traveled through Missouri and saw that the level plain was the floor of a large valley.  On our right as we were heading North were large hills and cliffs about three to five miles away.  To our left was the Missouri river and it seemed to never be more than one to three miles away.

I wasn’t driving so I got to look around a lot and just think.  I got to wondering how this big valley was created.  It just seemed too wide to be carved out by the Missouri River.  I guess plate tectonics could be a possibility but I would have thought there would be a rougher more dramatic landscape.  Eventually my thoughts moved on to other things like how many thousands of miles did Lewis and Clark have to paddle up stream. I mean even a “quiet” river is a constant unrelenting flow where you can’t just stop midstream and take a ten minute break.  Life was so different then.  Then as I was lost in thought and day dreams I took a drink from my cup and it happened.

You know how sometimes when your have a drink with ice in it and you tip the glass up to drink, but there’s a slight delay and then a clump of ice and liquid drops down onto you teeth and you quickly stick your head forward and bend over at the waist to keep everything from spilling all over.  If you’re lucky and react fast enough you just get a little spill down your chin.  Well that’s what happened to me.  A clump of ice came crashing into my teeth and, through a convoluted roundabout way, that got me to thinking maybe a retreating glacier created the valley.  I’m no expert in geology but thanks to the St. Louis Community College at Meramec I do have five credit hours in Geology, two of the five for lab.  But those credit hours are from 1971 and although they don’t expire whatever cells they occupied in my brain have expired.  Bottom line is I don’t know what created the valley and about forty-five minutes of Google searching didn’t enlighten me any.

Anyway, as I said at the beginning it’s Day 2 and we are headed toward Grand Rapids, South Dakota and Mt. Rushmore.  But first we took a stop in Mitchell, South Dakota to visit the Corn Palace.  I guess in the days before Disney World, Six Flags, Sea World, Busch Gardens, etc. something like the Corn Palace might have been a pretty big deal, especially if you lived in rural isolated area where all you see for hundreds of miles are plains, corn/wheat fields, and forests.  Personally I found it kind of interesting but was not blown away.  I do admire all the work and skill that goes into decorating it with various colors (all natural) of corn.  Here is Wikipedia’s info on the Corn Palace.  Almost all of the pictures I took at the Corn Palace were of my wife and P & B but here are three with out them.

Kind of a strange tabernacle/shop below.  It actually was mostly a souvenir shop.  The onion shaped turret in the background is part of the Corn Palace.  The horse was made of a golden colored sheet metal, also kind of strange. 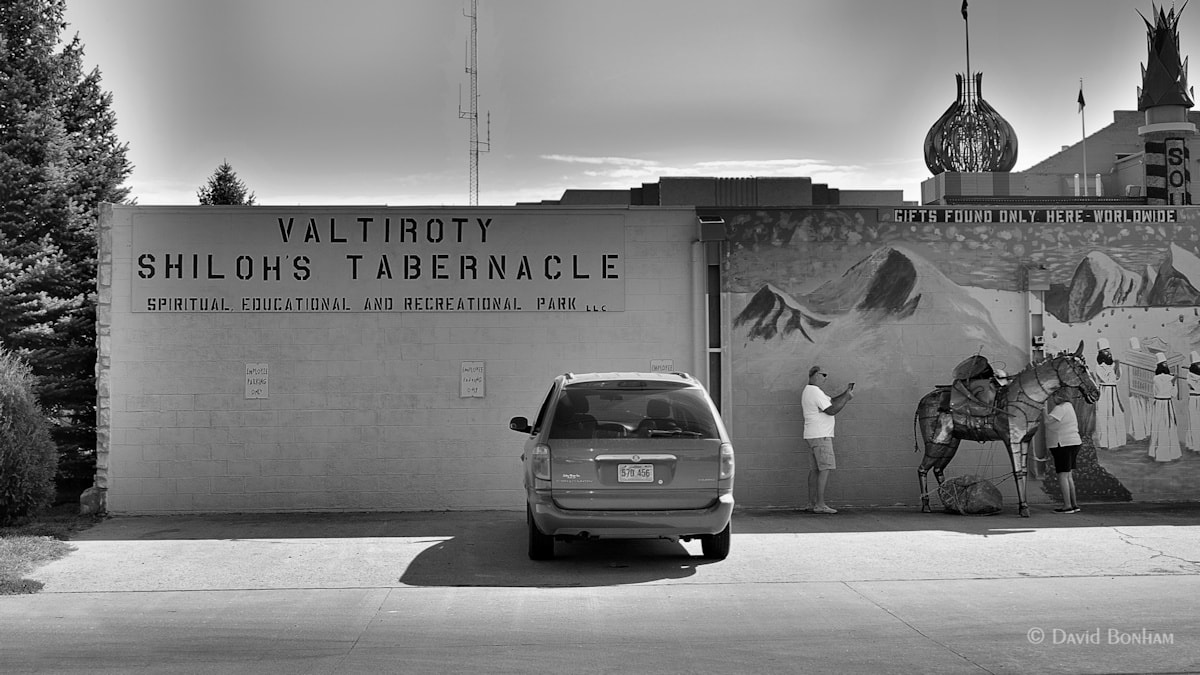 I love tacky tourist shops and this one fit the bill.  Of all the tourist T-shirts I’ve ever seen this one is my current favorite.  It’s funny and it’s tacky, and I’d never wear it.  It’s obviously been in the window for awhile. 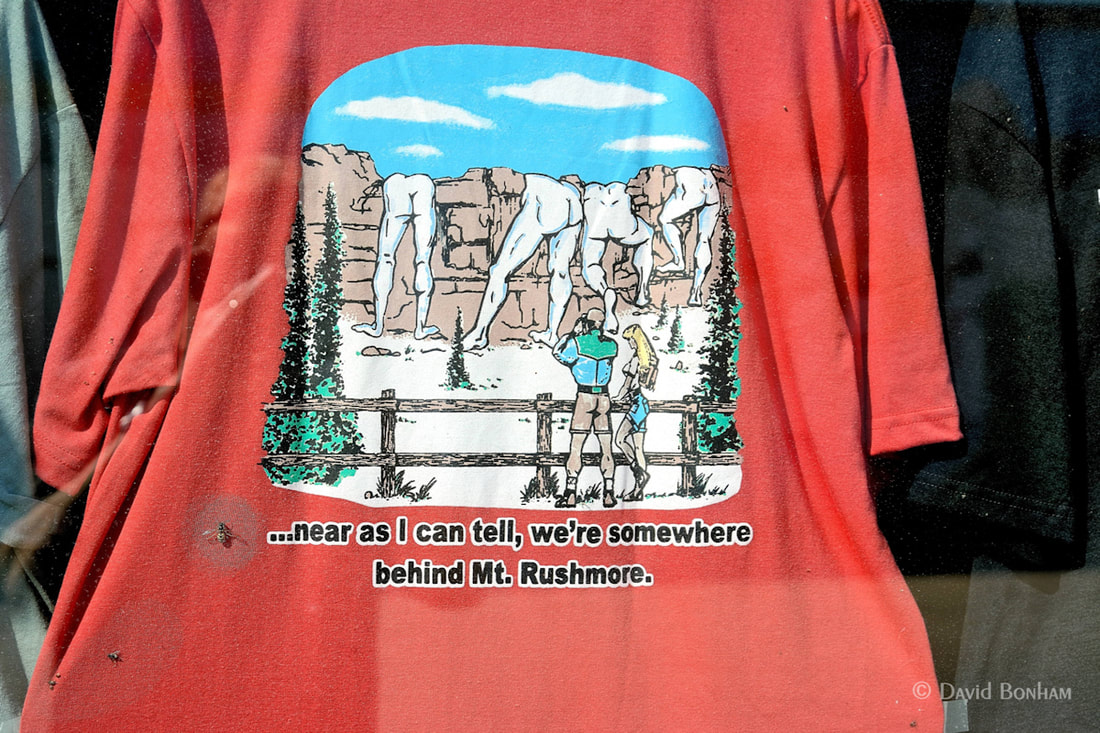 A closer shot of the horse and mural at first building. 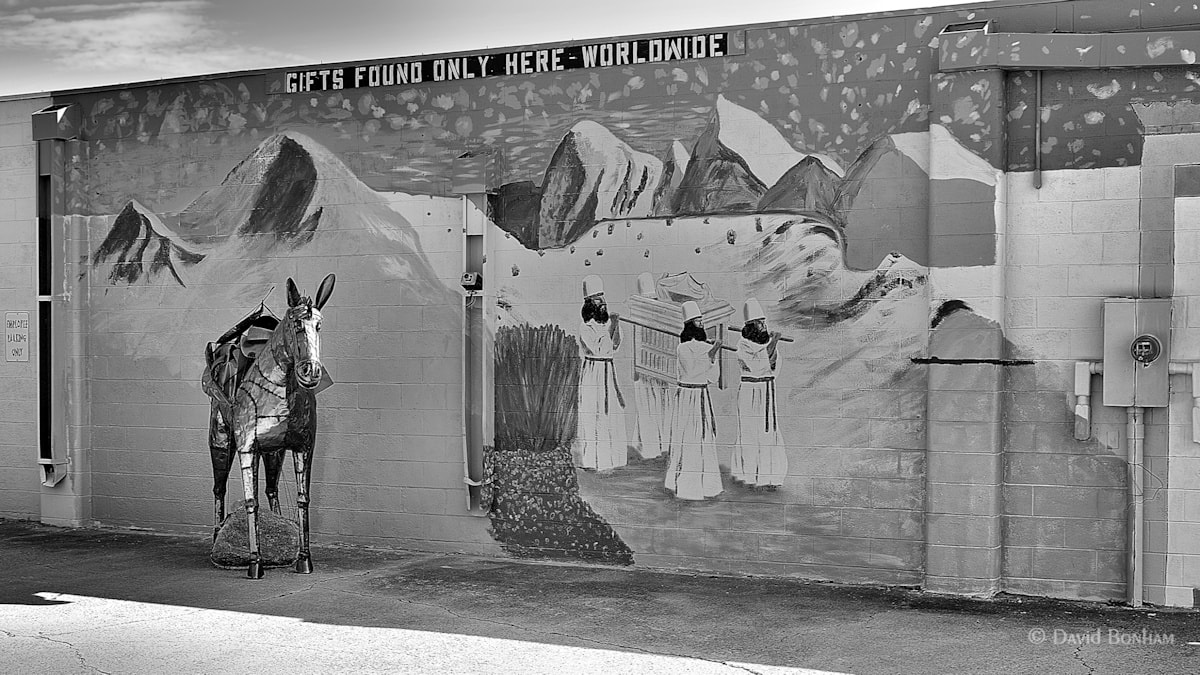 After lunch in Mitchell we were anxious to get back on the road and make up time lost at the unexpected stop for the Corn Palace.  We started planning what we would do first when we got to Grand Rapids assuming there was still daylight.  Turns out we didn’t need to plan as we saw that the Badlands were outside of Grand Rapids and all we had to do is a take a little 20+ mile detour that kind of ran parallel with the interstate and we would be touring the Badlands.  On the way though we were bombard by billboards along the interstate (where’s Lady Bird when you need her) advertising Wall Drugstore in Wall, SD.  Their claim to fame was Free Ice Water!

Now in the 1950s and early 1960s when most cars only had 4-60 air conditioning (roll down four windows and drive sixty miles an hour), and tourist stops would rip you off by charging 25 cents for a six ounce ten cent bottle of Coke, free ice water was probably a good draw for travelers.  As we examined the map it looked as though as you came out of the Badlands and got back to the interstate, Wall was just a hop skip and a jump on the other side.  We decided we check out the Badlands and then head on to Wall to find a place for dinner.

Below are some of my photos from the Badlands.  We entered from the east and drove west and that’s how these photos progress. 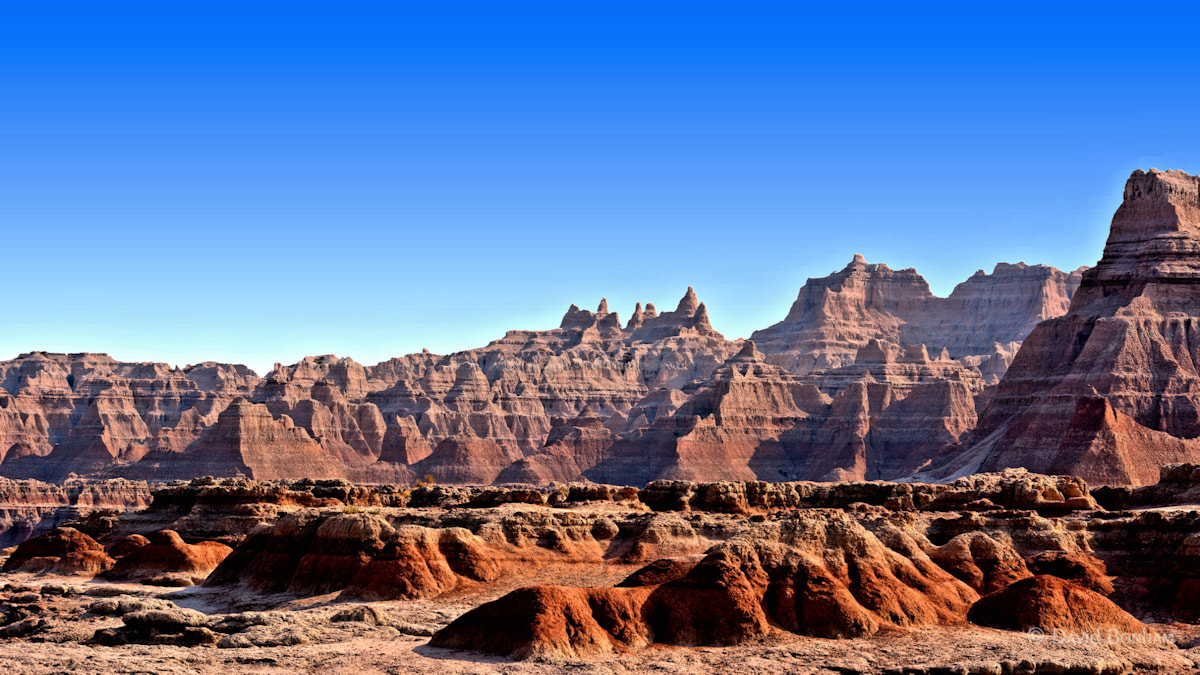 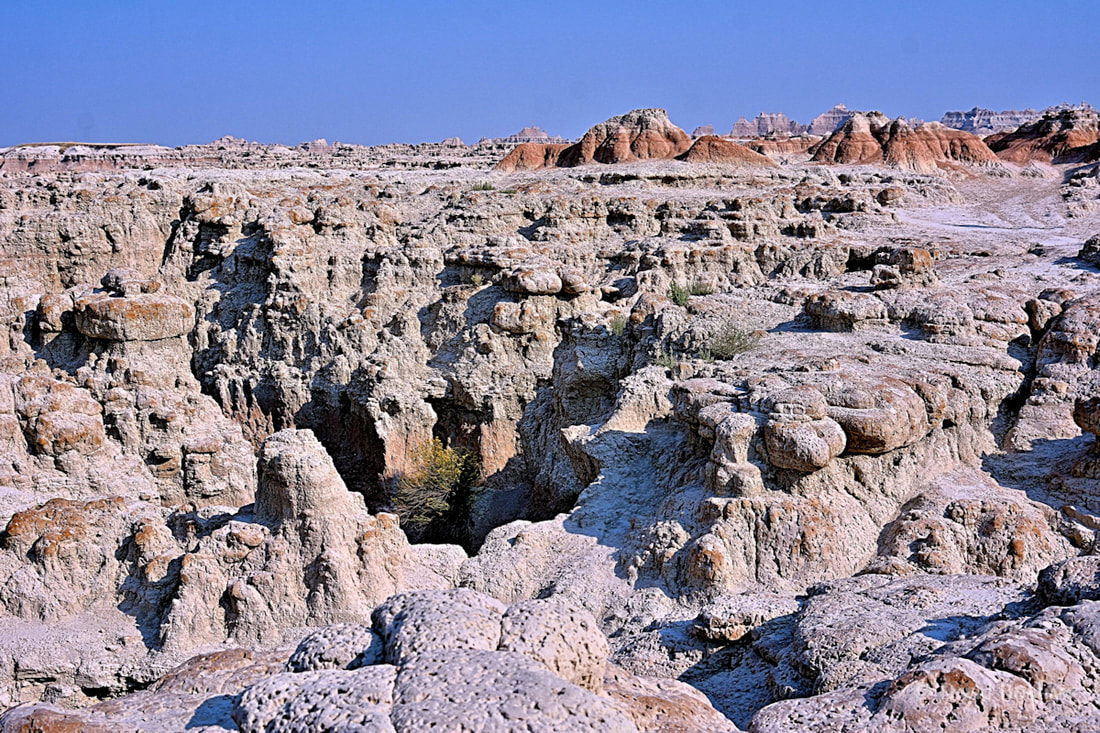 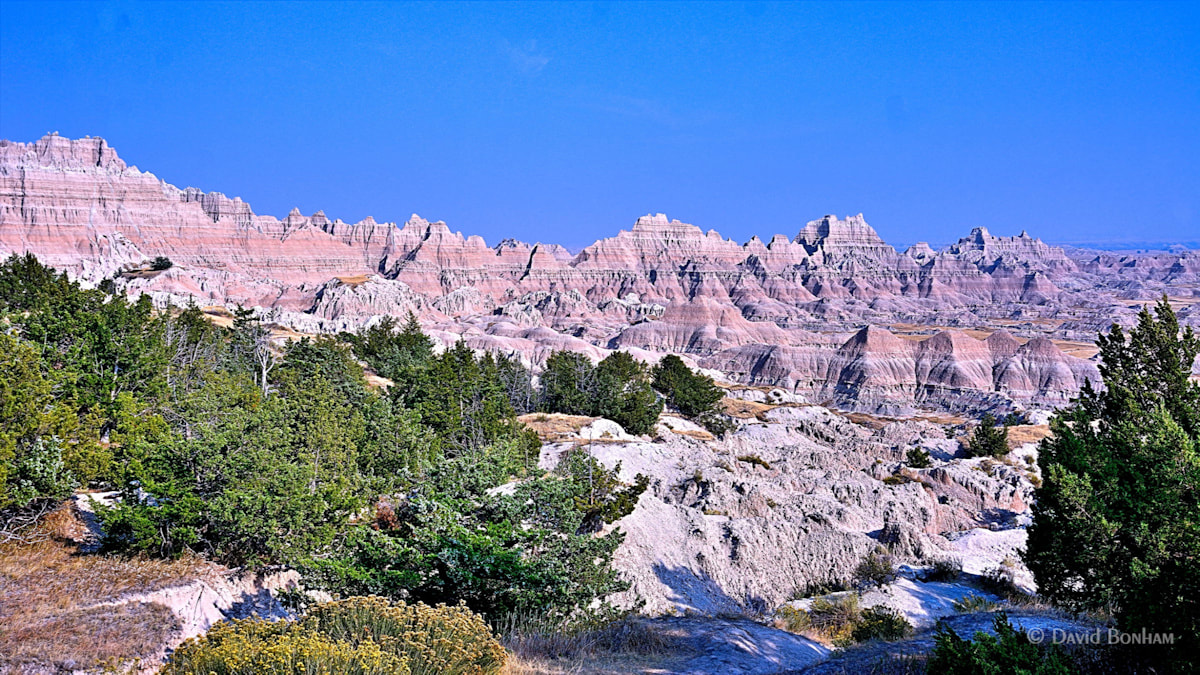 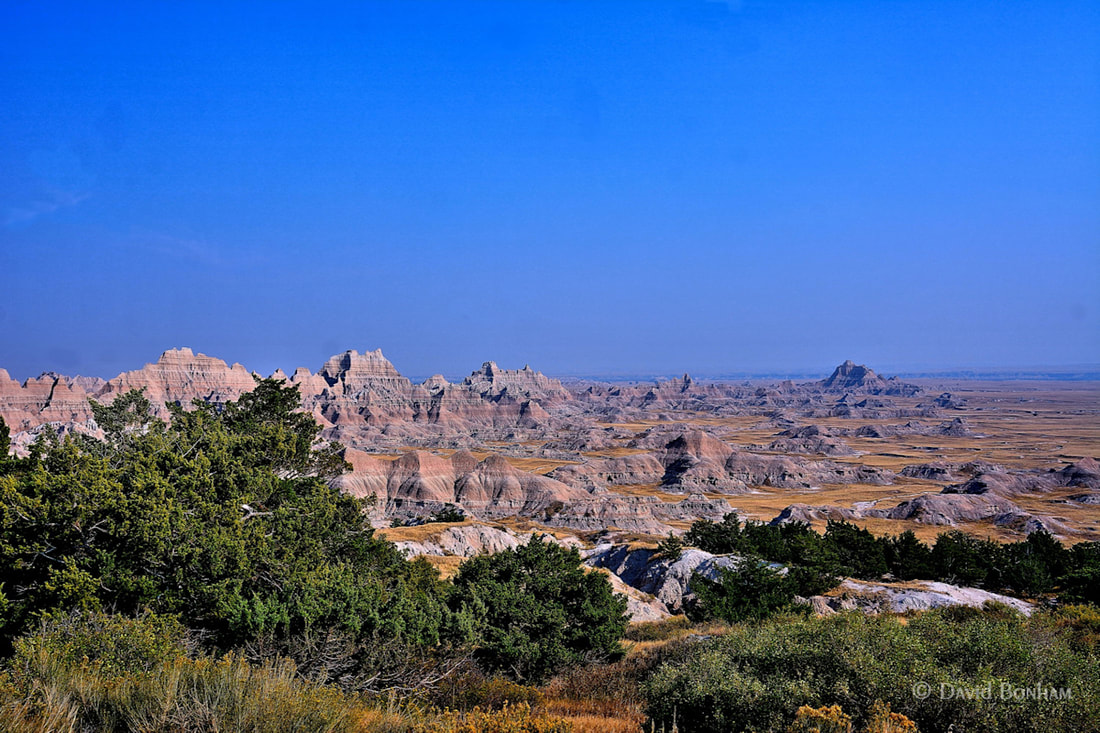 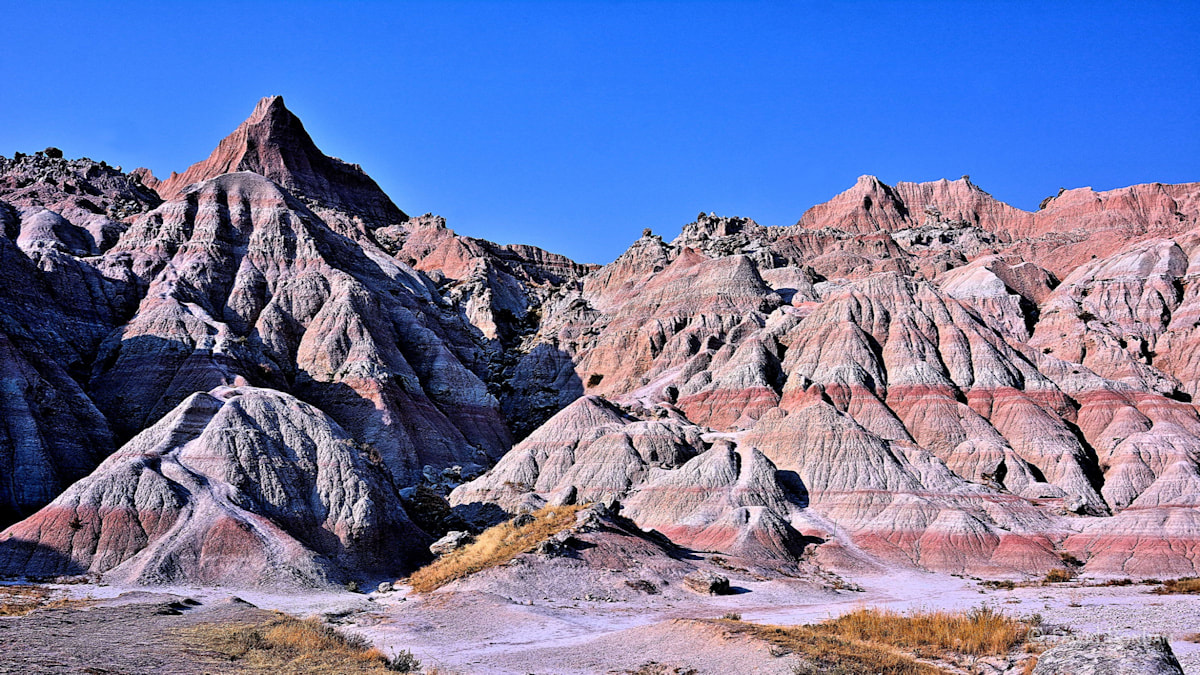 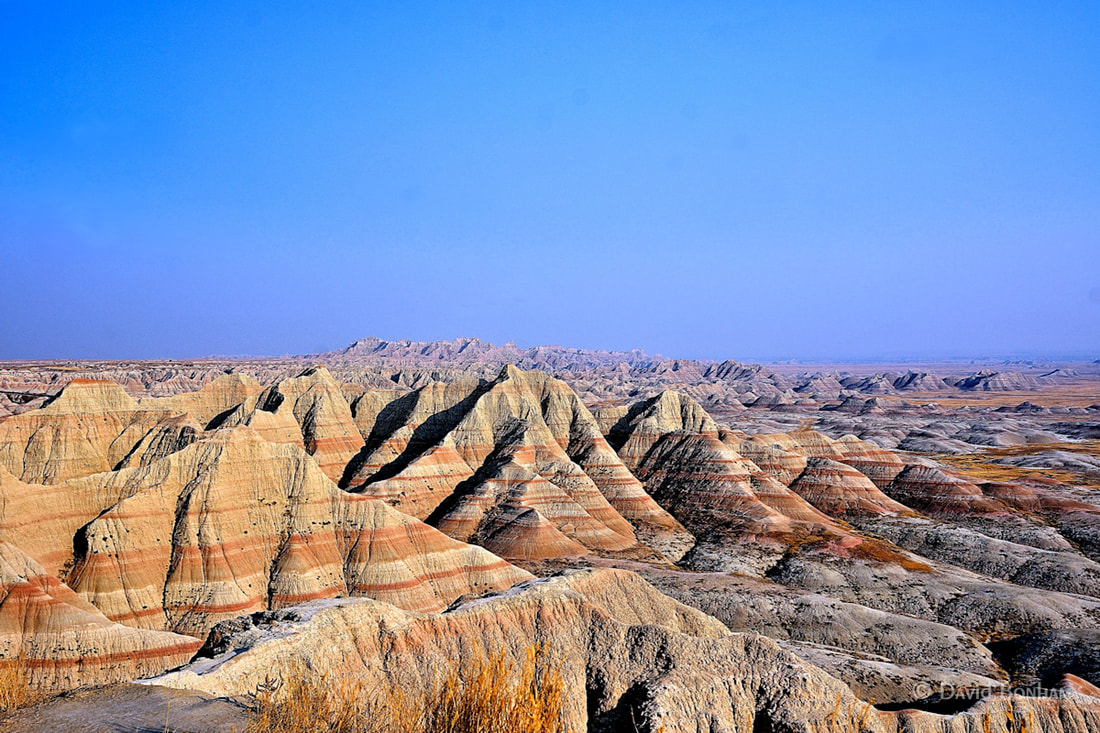 The rest of the photos were taken at the far western end.  This big horn sheep was the first wild life we noticed. 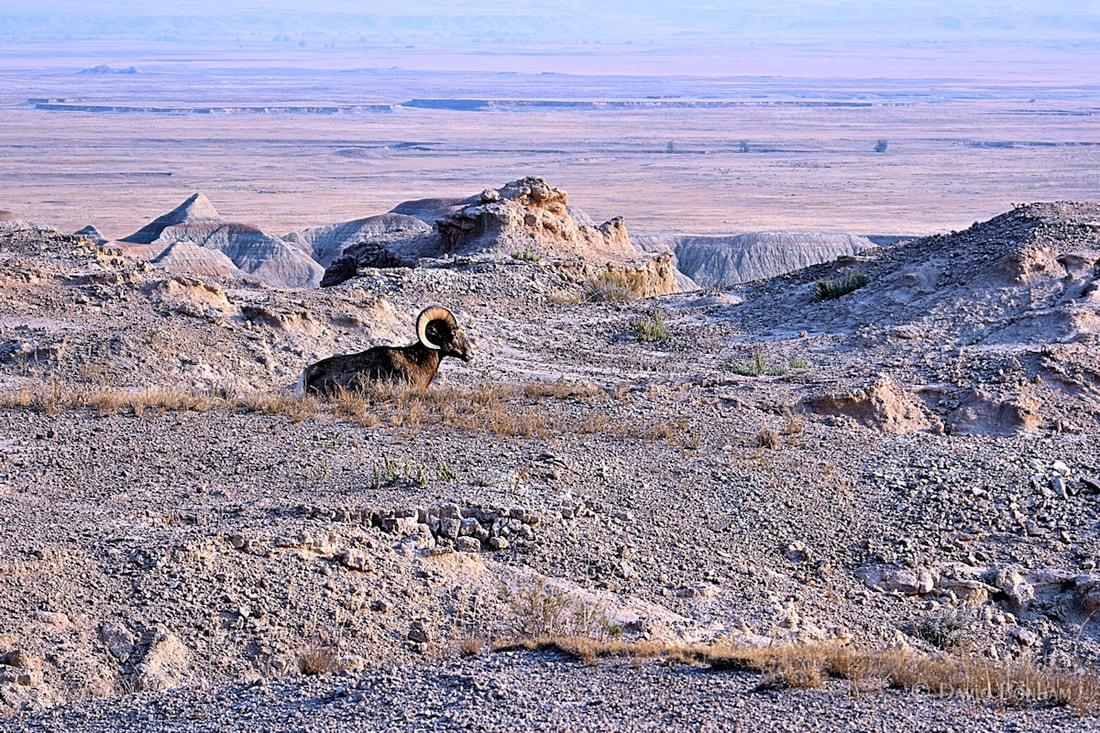 This a very large prairie dog colony that I did a terrible job of photographing.  My excuse is that I was shooting into a low sun.  Yeah, that’s the ticket, it was a low sun – couldn’t be helped.  That’s my story and I’m sticking with it. 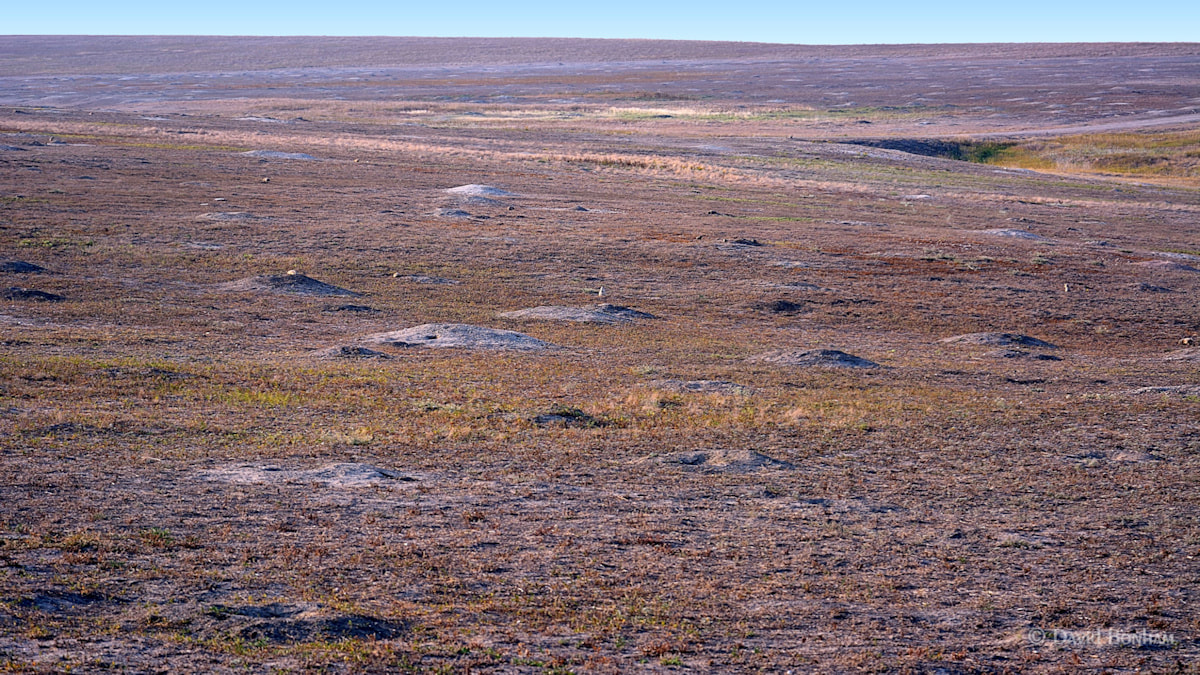 Seeing this sign kind of made me wish I hadn’t gotten out, walked around, and kicked up the dust. 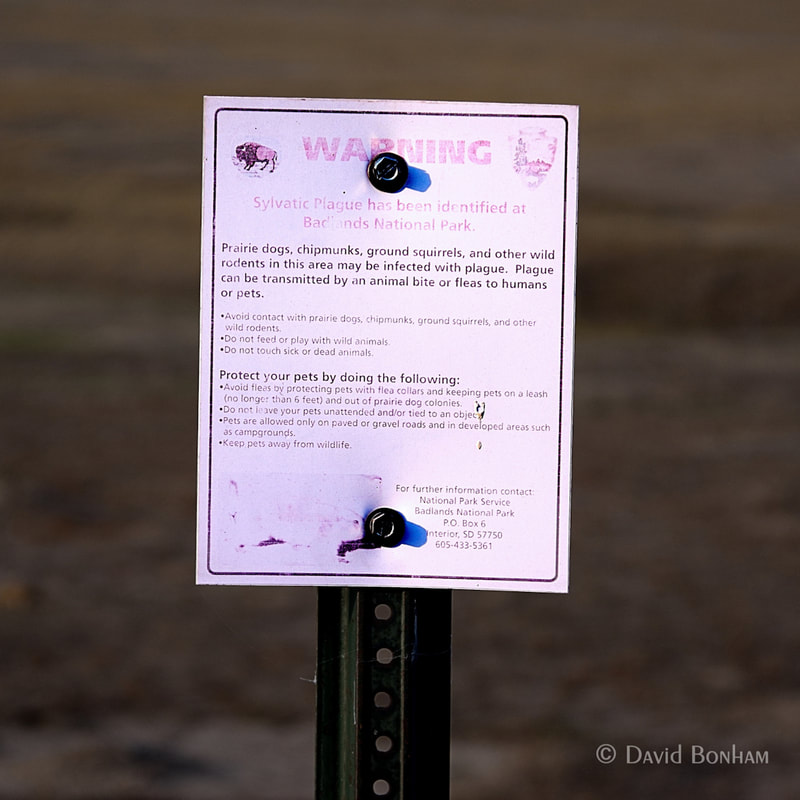 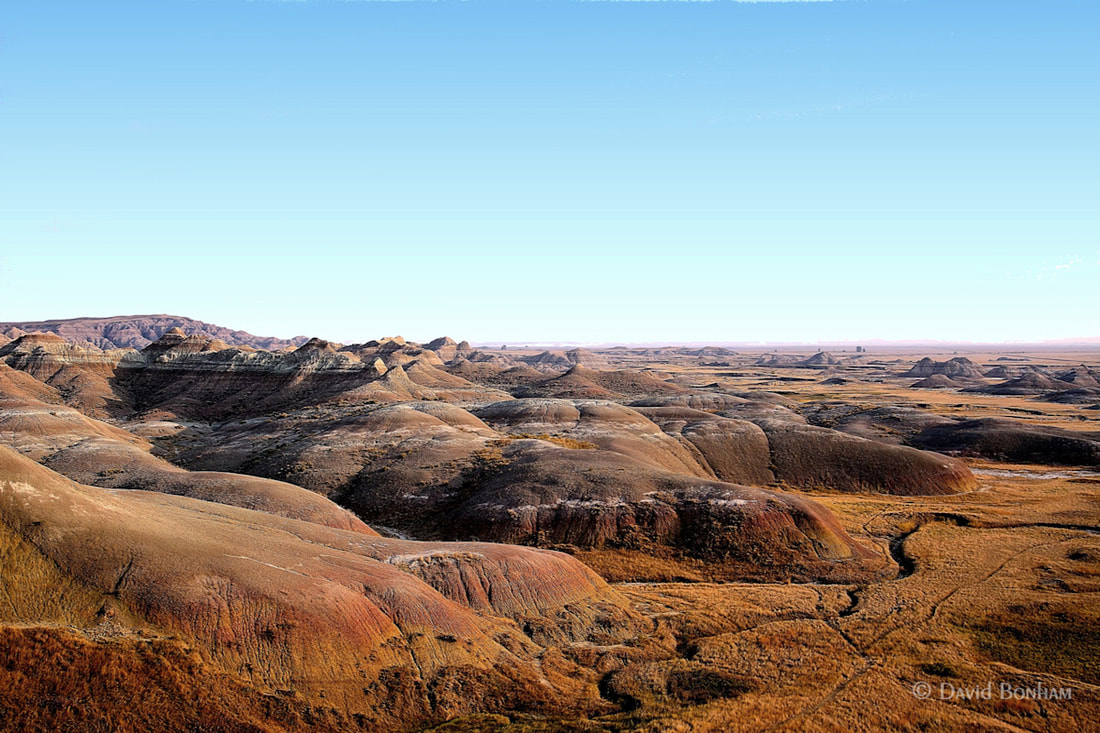 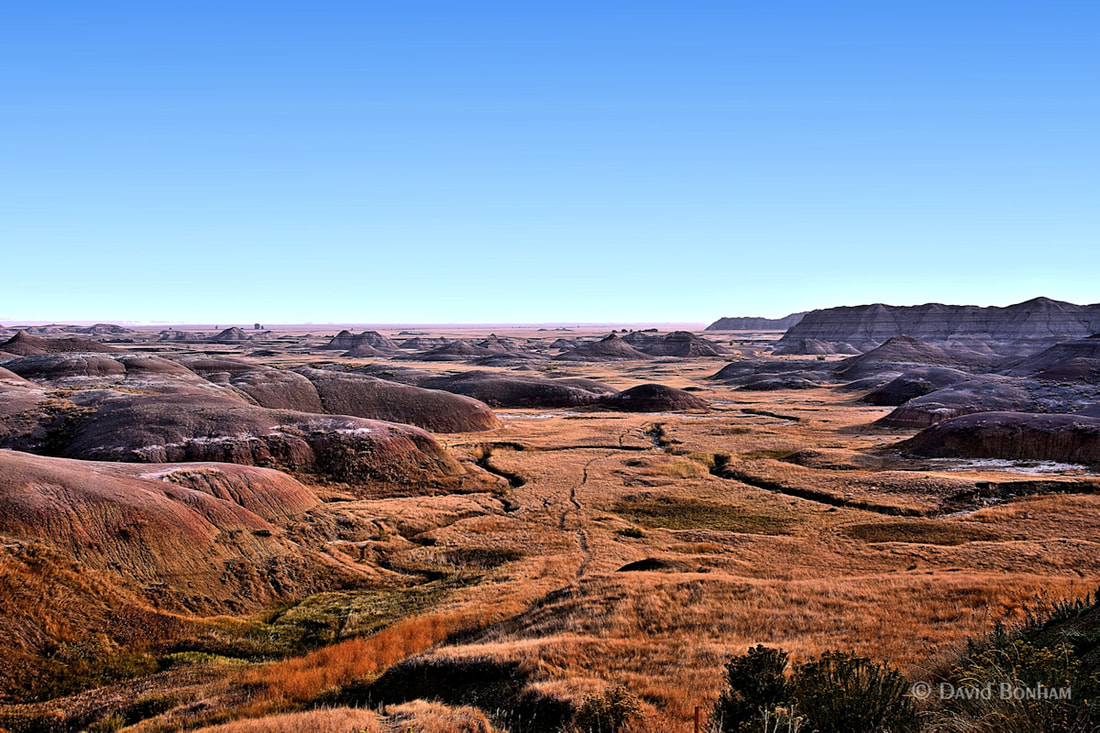 Remember how I ended Part 1 of this series with a shot of Robby the Robot.  Well here’s another inanimate face:  Stanley Longneck. 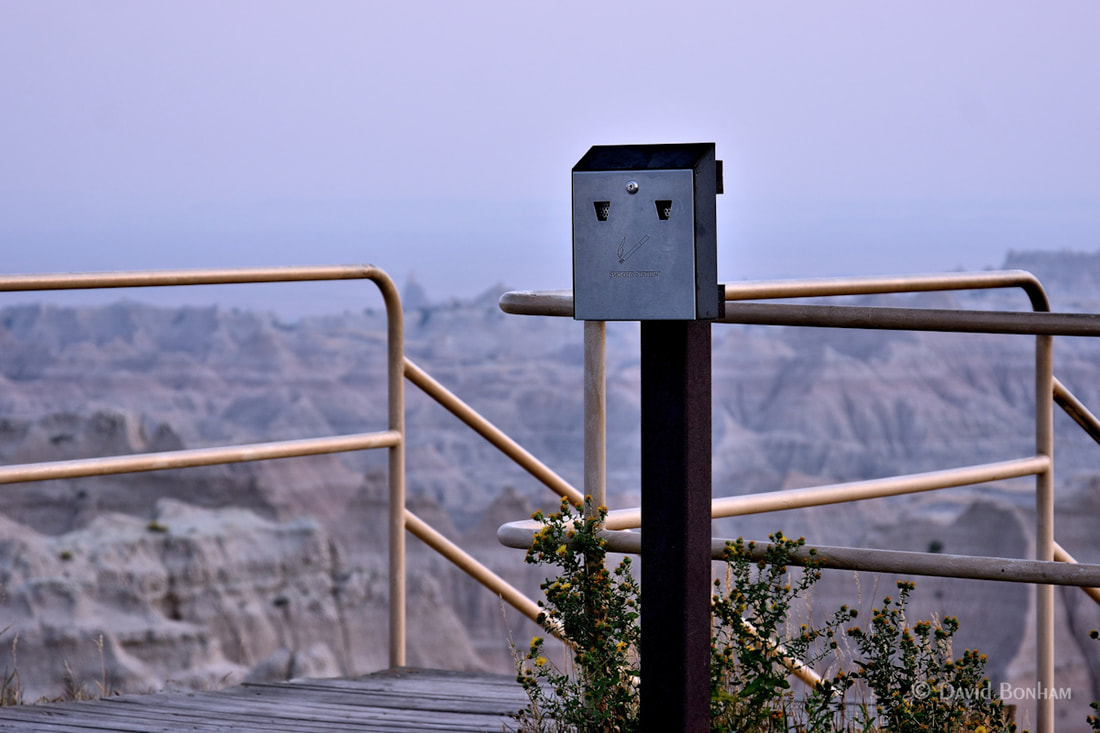 Thank you for taking the time to view my photos.