So last week in the pre parade Cinco de Mayo post I showed you some shots from around Cherokee Street before the parade had started.  Today I’ve got some shots of the parade (well not so much the parade, more of a focus on some of the participants) and a couple of shots on the way to the car after the parade.

Okay, so I do have one pre parade shot in this post.  This guy has got his spot all picked out ready for the parade.  What he doesn’t know (or maybe he does and is just resting out of the sun until things start) is that there will dozens of people on this corner standing in front of him within the next ten to fifteen minutes.

I see this group in the parade every year.  There is always another guy but I had to crop him out to make the picture work.  I’m just curious as to why they wear their Día de Muertos (Day of the Dead) makeup on Cinco de Mayo when the Día de Muertos holidays in Mexico are October 31 – November 2.  I don’t really care though because I like photographing them. 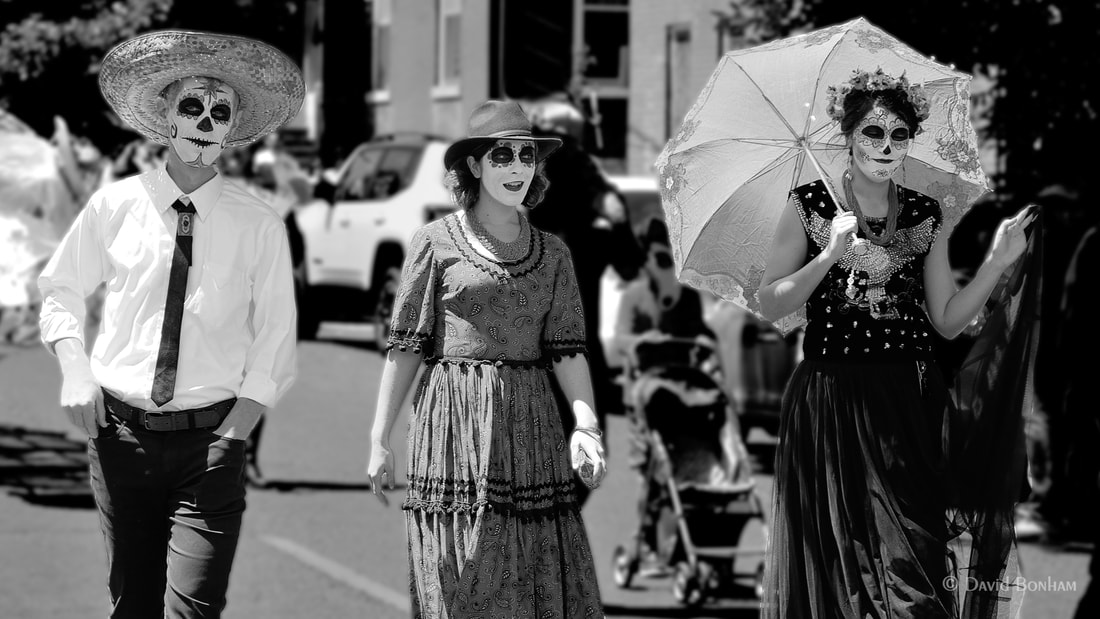 This is a group representing a dancing school.  The girls were really into what they were doing on a very hot day.  I took a couple of shots hoping I’d get something.  I love that each girl has a completely different expression as they dance the same routine. 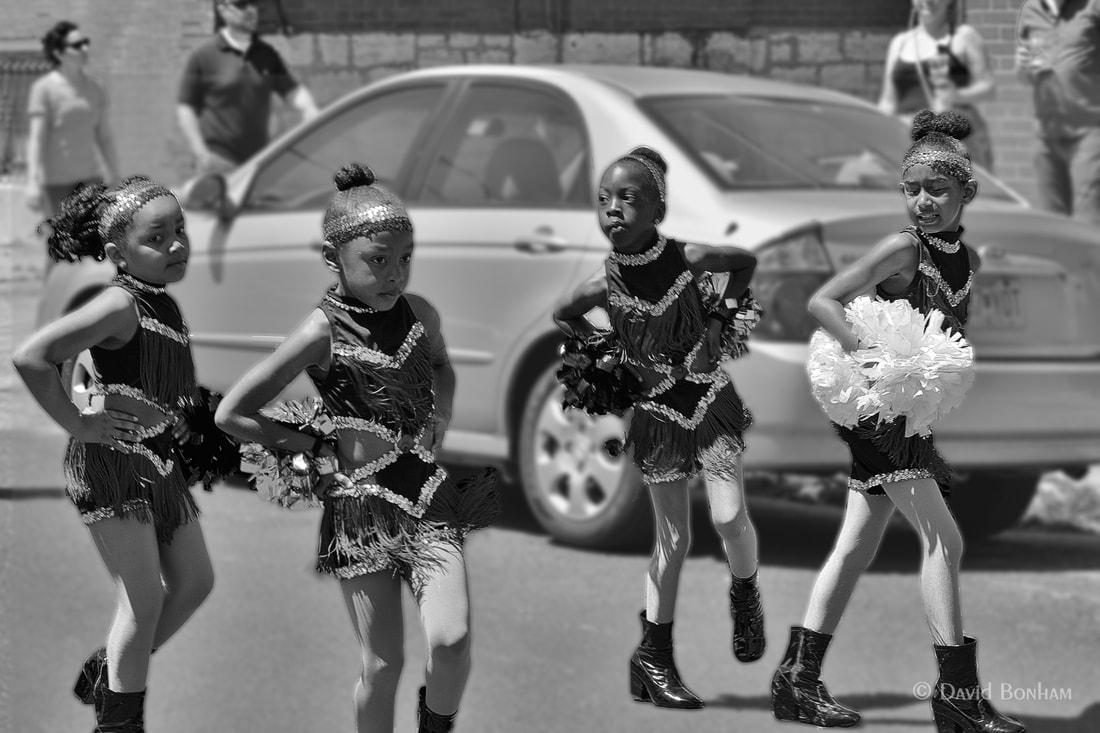 This guy, like so many people that show up at festivals in St. Louis, is just creepy looking.  He’s a parade regular. 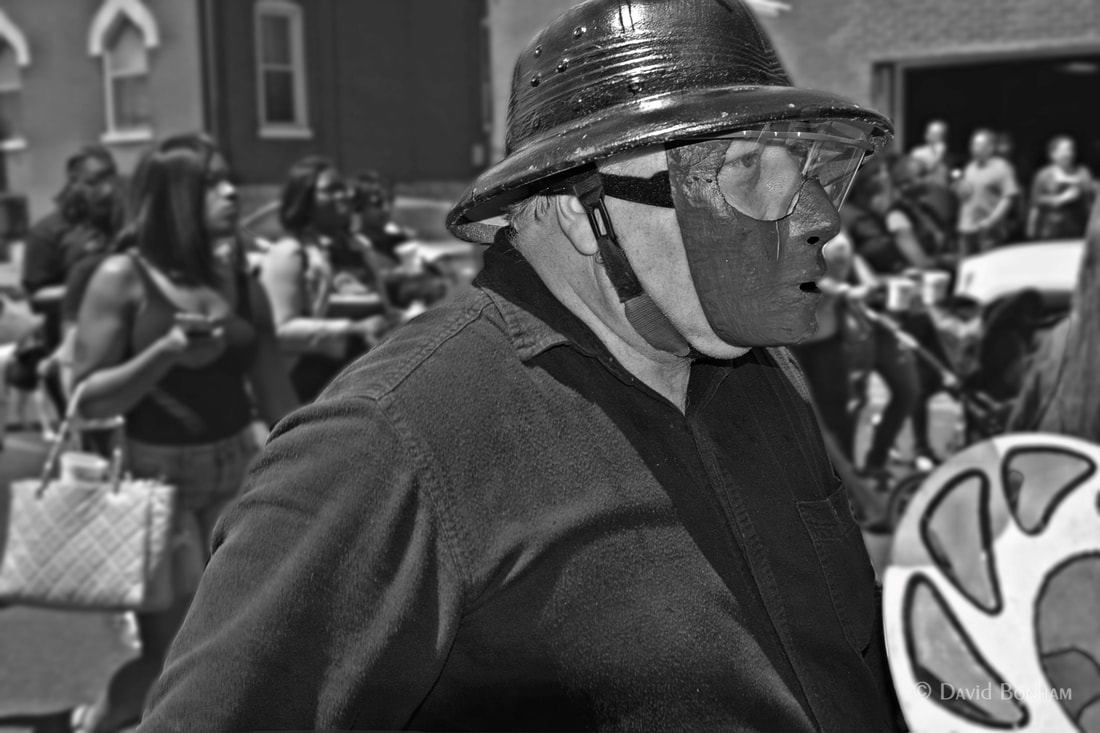 Another parade regular.  At least the mask is.  I’m just assuming it’s the same person each year.

I don’t remember this from prior years.  When I see this photo I think of the androgynous character Pat on Saturday Night Live because I don’t know if the person behind the mask is a guy or gal. 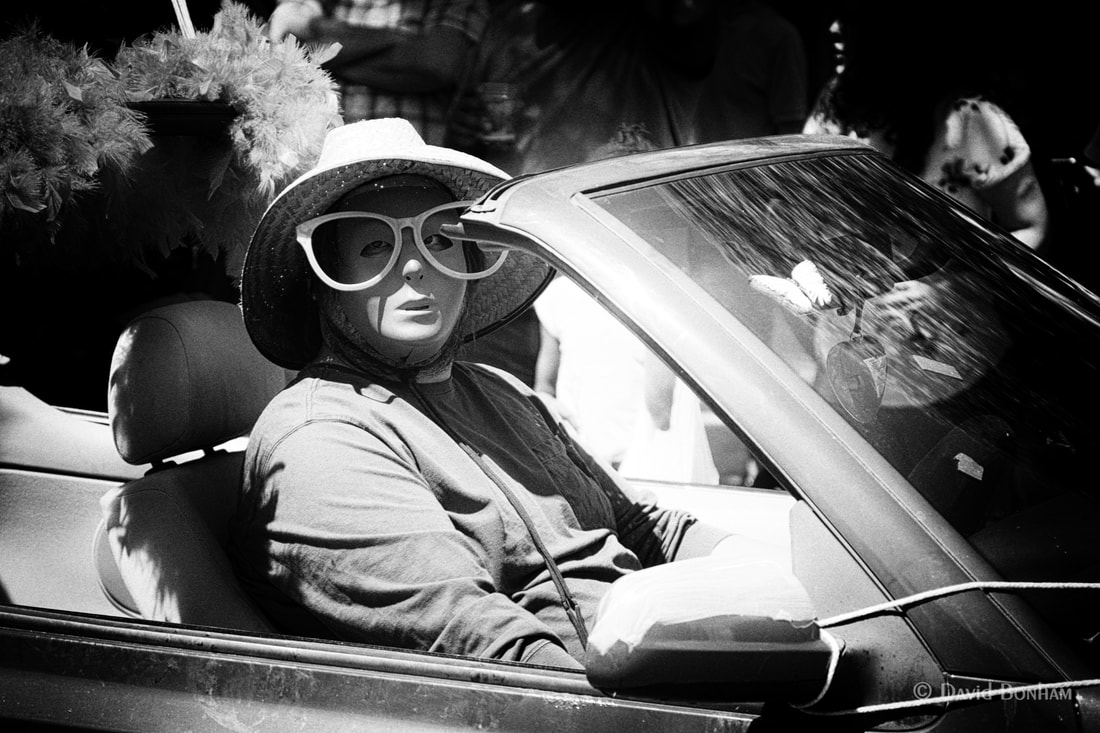 Not exactly corporate boxes but a good view from the second story of a restaurant/bar.  I kind of like peeping in while they are peeping out. 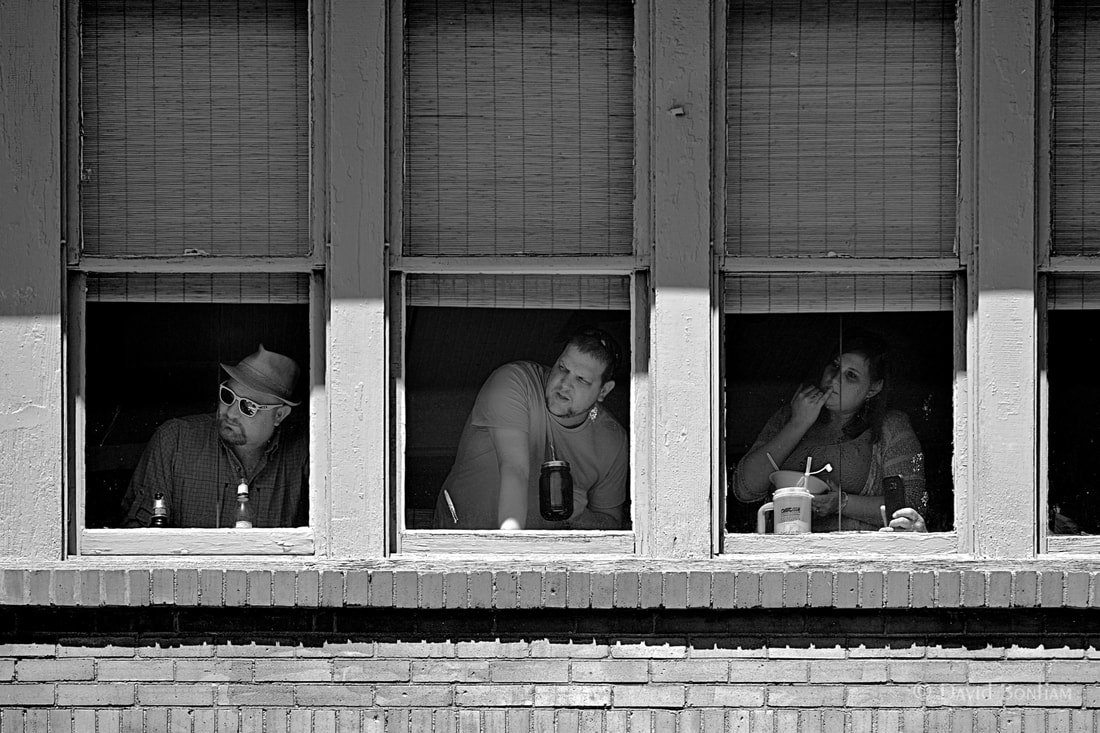 These last three photos were taken on my walk back to the car after the parade.

With regard to this photo, I’m not a body language expert but I think he may be more into her than she is into him.  As an aside, he prompts me to reflect on the fact that I take pride in never having purchased a Nehru jacket, a pet rock, or a fidget spinner. 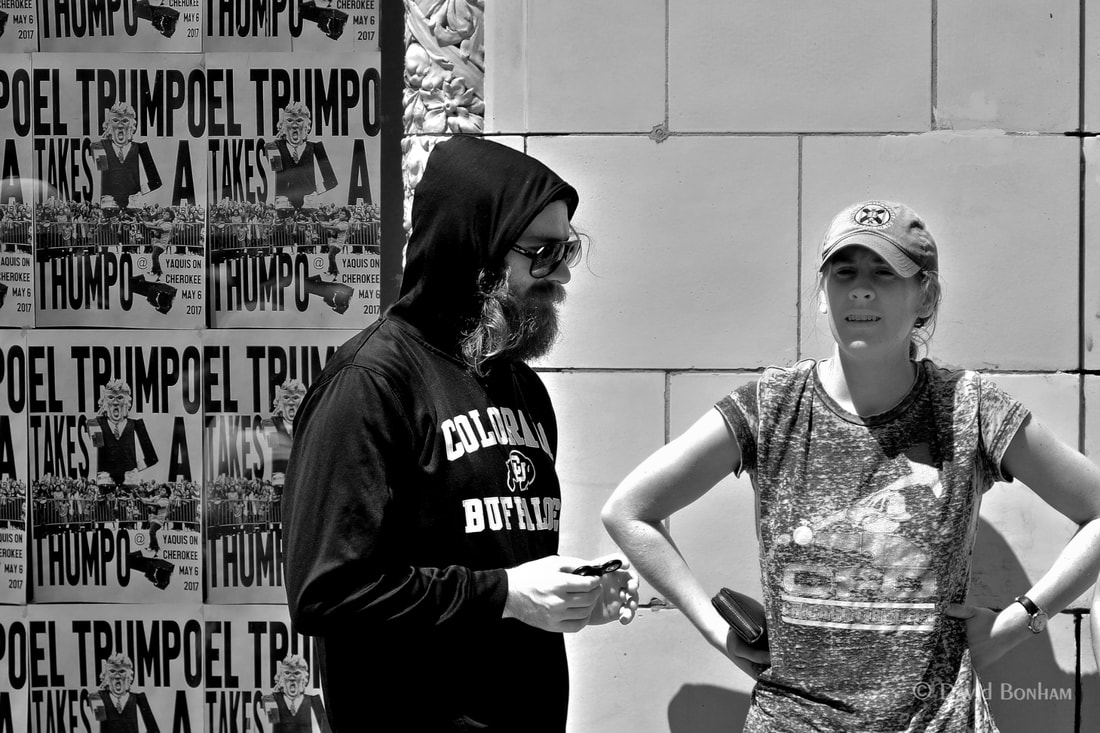 Yeah, I’m pretty sure I won’t be visiting either of these places. 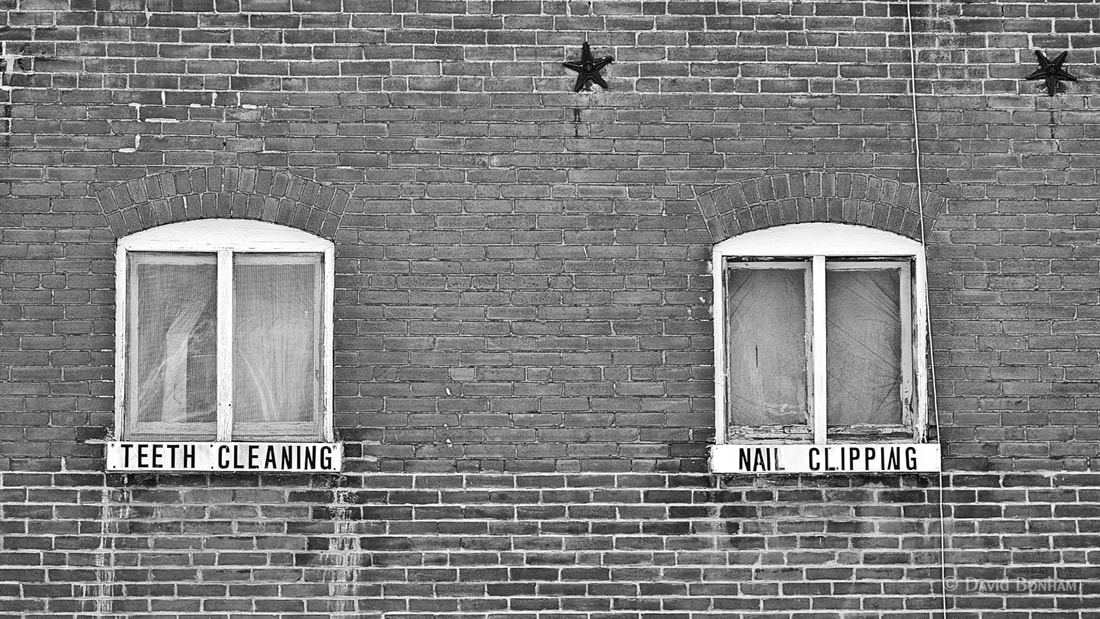 Trivia time for the above photo.  See the two metal stars in the upper left half?  Know what they are for?  For years I noticed them on multi-storied brick buildings in St. Louis.  Sometimes they are round or square plaques with varying degrees of ornate decoration and sometimes they just look like a big nut and washer.  What those are are the end caps of metal rods that go from one wall to the wall on the opposite side of the building.  They add stability to the masonry structure.  This little tidbit of information has cost you nothing as it is all part of your annual subscription to my blog.  Your welcome.

I originally managed to get a shot off before they saw me but the young lady and her friends were so happy to see me I couldn’t let them down and not take their picture.  Or maybe they were happy to see me leaving the neighborhood.  That would be a bummer because she is showing way too much happiness.  I’m going to stick with my first thought. 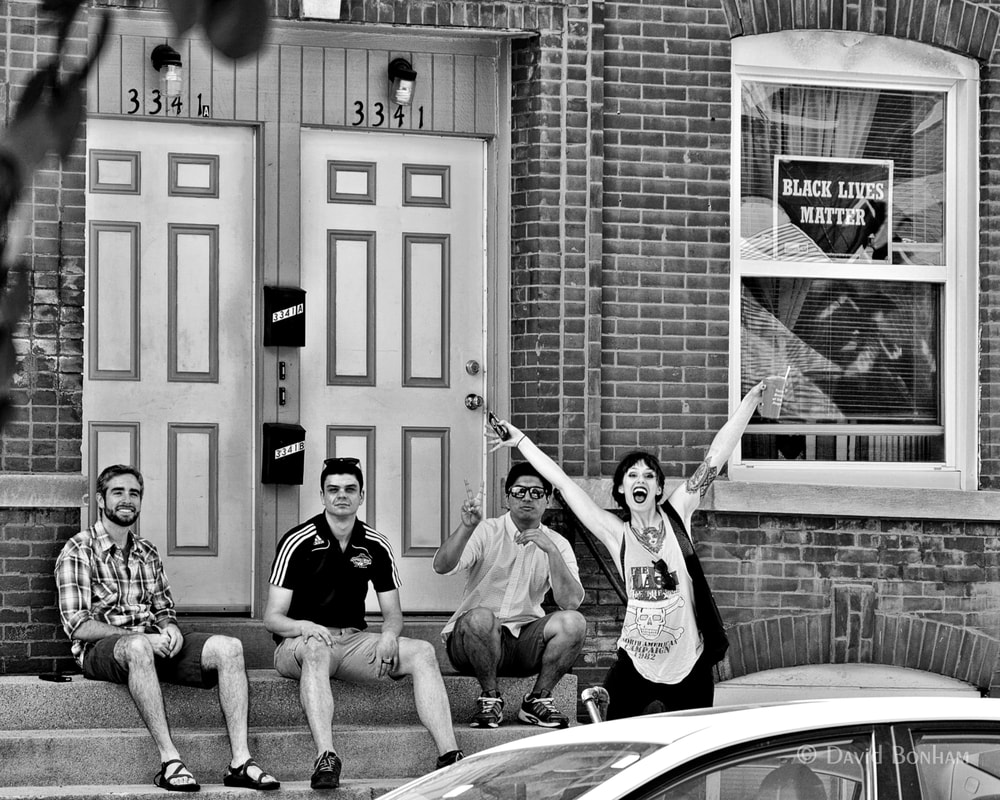 Hopefully you’re not that happy to see me go.  Bye.

All photos taken with my complicated Nikon D7100 and a Nikkor 24-85mm zoom lens.