Here are some photos from last year’s Cinco de Mayo celebration in the Cherokee Street neighborhood in south St. Louis.  While they have several activities going on my favorite is the parade.  It is truly a local event; no big decorated floats or marching band, just neighbors marching in costumes from south of the border, others riding decorated bicycles, many seem to be just marching in the parade because they can.

The photos below were taken on Cherokee Street.  About five blocks of it are closed off and food, drink, and merchandise venders set up stalls on both sides of the street.  (The parade is in a parallel street one  block to the north.)  After the parade the Cherokee Street is jam packed with two rivers of people moving in opposite directions.  These photos were taken early in the day, before lunch, and before the parade.

Lady on her own enjoying some kind of drink, most probably something with a little kick as that is the theme of the day.  Note the advertising chalkboard behind her.  I didn’t’ notice it until I was processing the file or I would have explored more with my camera in that area. 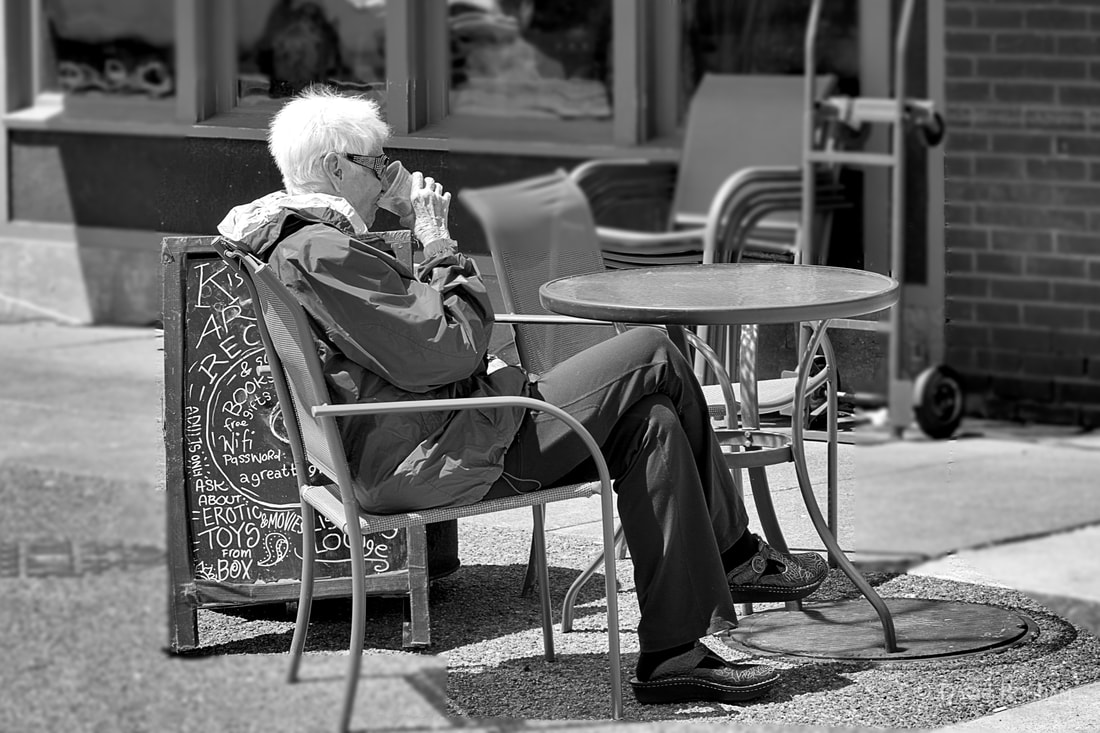 Instead of a food truck a clothes truck – just ladies of course.  Clever sign if your a 60s Motown fan. 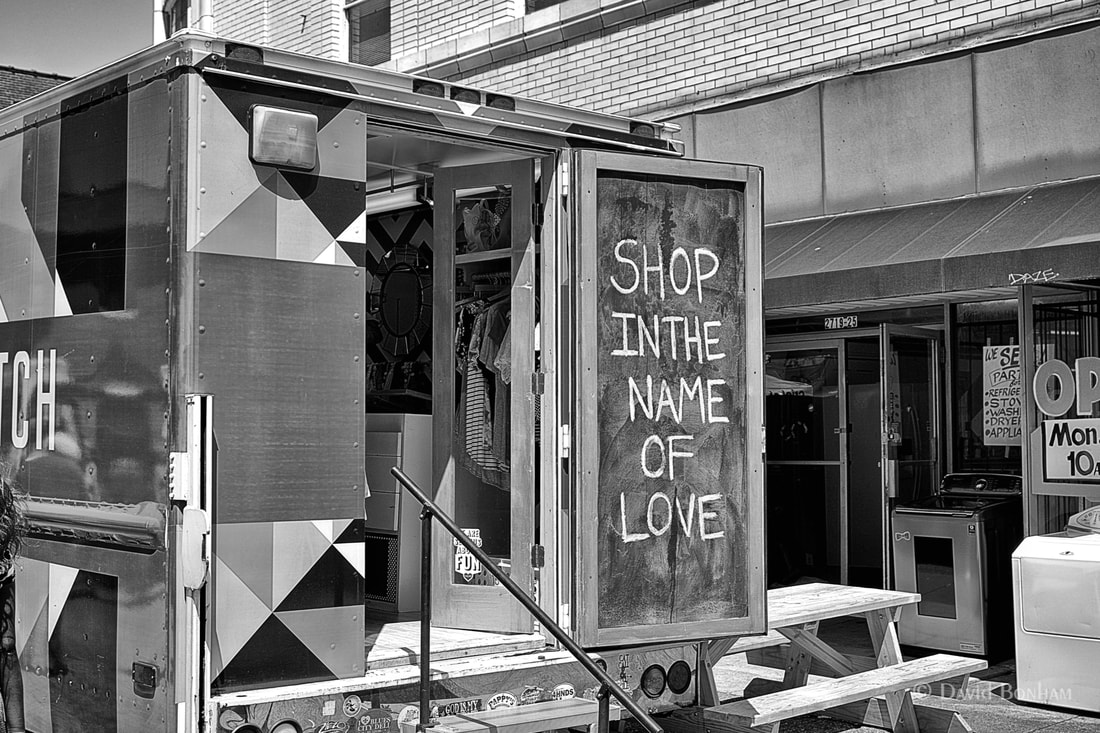 I’ve seen this couple every time we’ve been here but don’t get to take their picture every year.  Obviously I was able to do it this year.  Looks like the guy has to drink left handed this year. 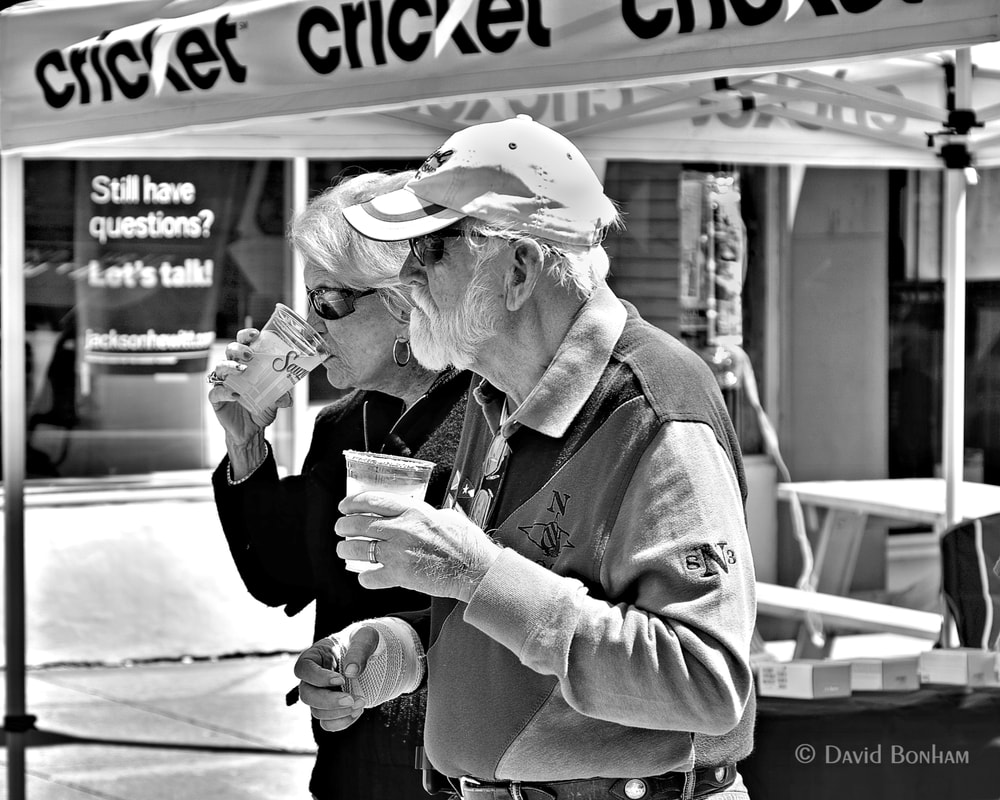 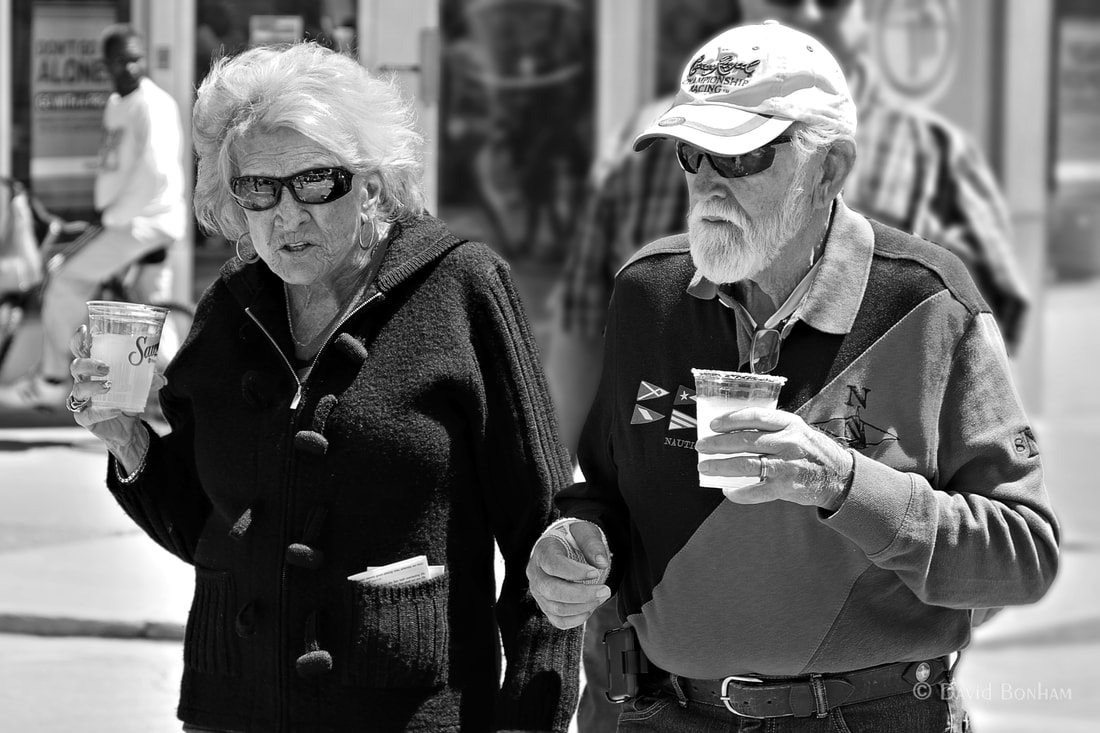 Looks like the solo lady in the first photograph hooked up with someone.  His can of beer seems to have a handle.  In the first photo of the lady I didn’t see any sign of what appears to be a staff resting on her right shoulder.  I get the impression you don’t want to mess with either of this two. 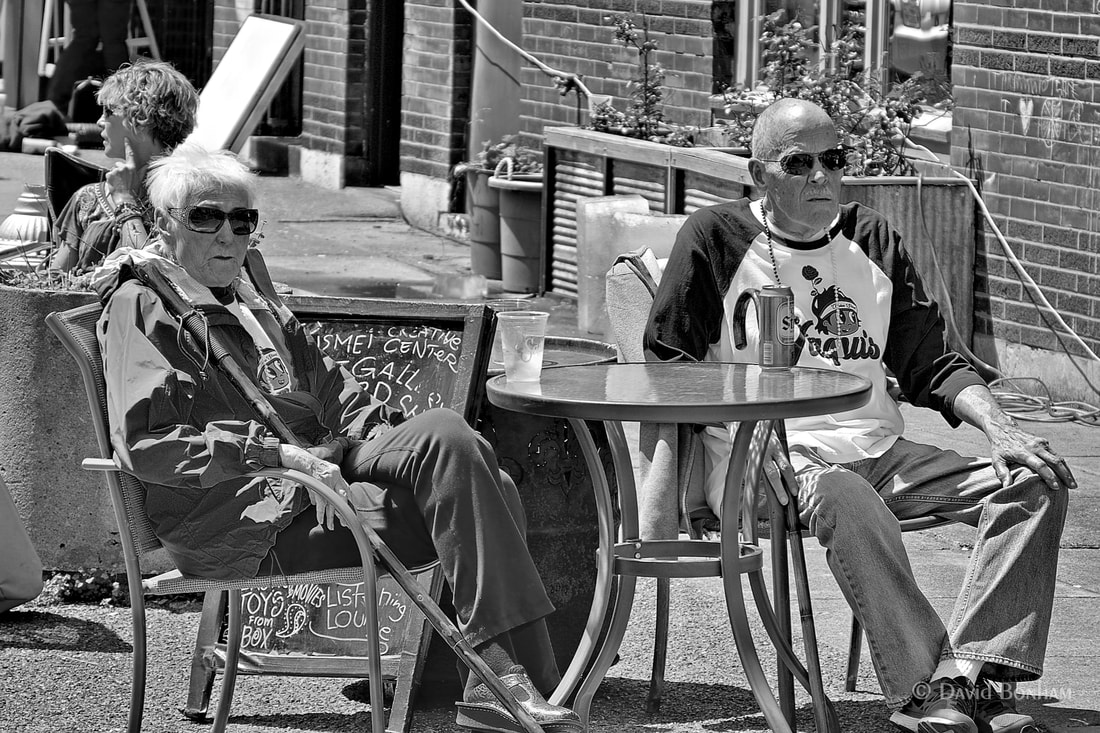 Just so you won’t think this is an event dominated by old people here are a couple of more shots of  the celebrators. 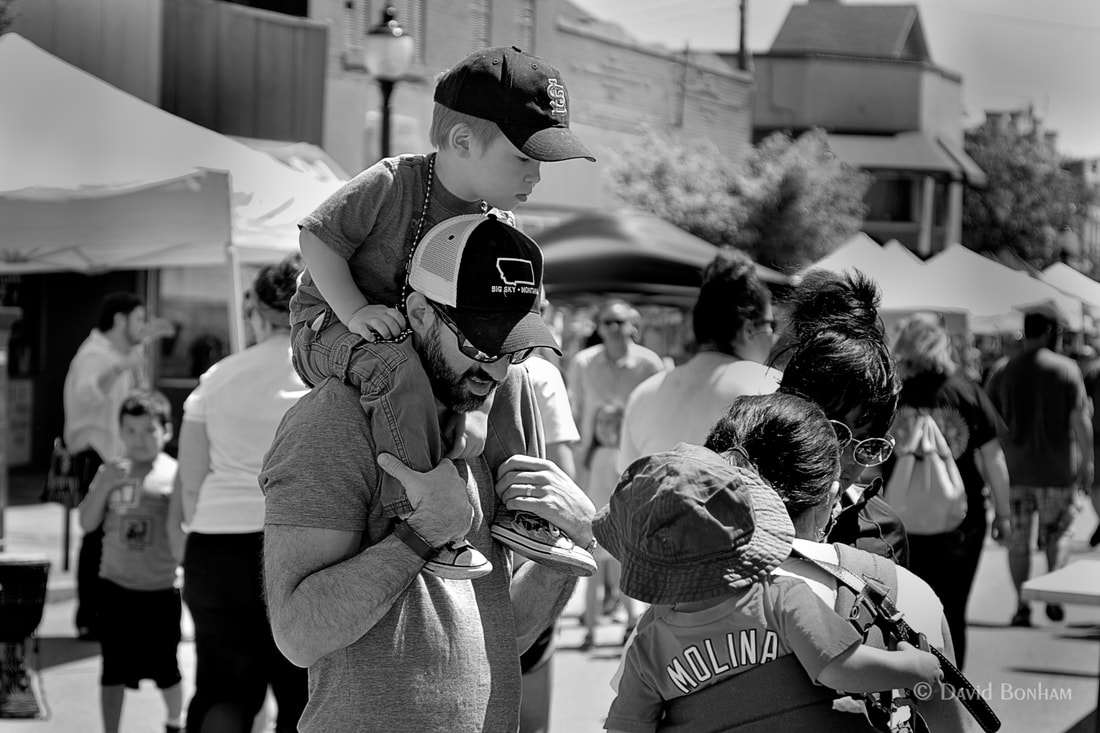 After the parade this photo would be impossible to take as the street is literally jammed with people for several blocks.  And I literally do not use the word literally lightly. 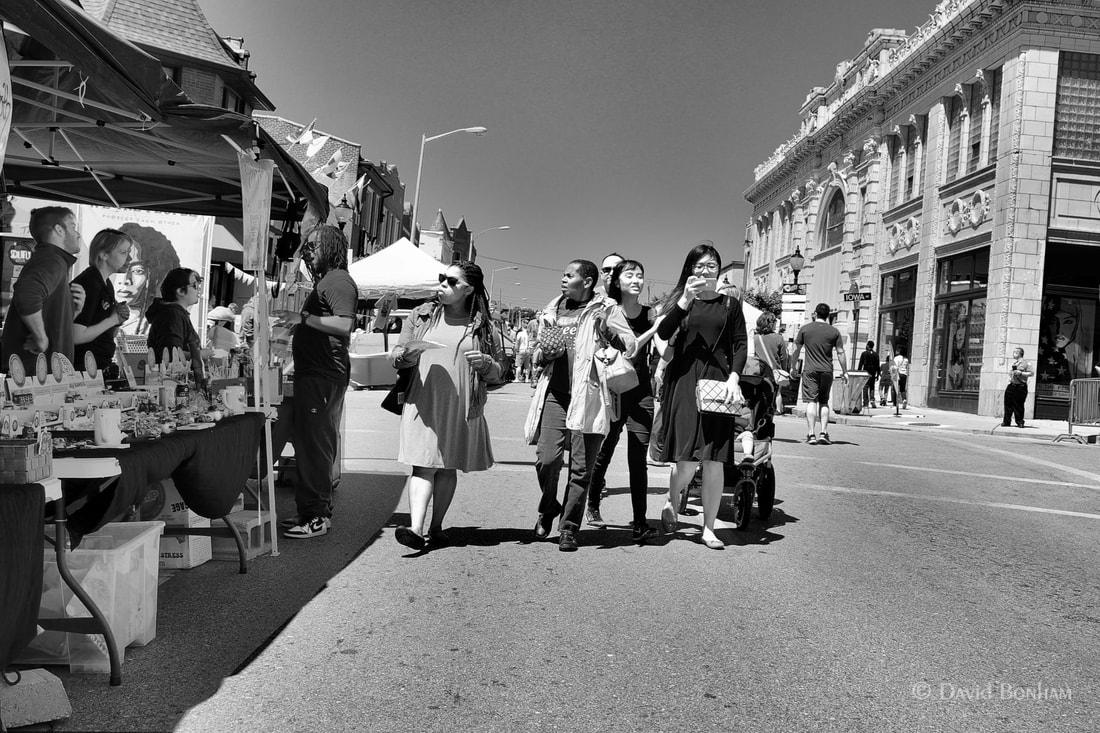 Can’t have street festival celebrating Mexico without a taco truck.   We prefer any one of the several the fulltime Mexican restaurants  on Cherokee Street.  They are all mom and pop types of places, i. e. very, very casual; linoleum floors and kitchen tables and chairs.  If you want, they all serve Coca Cola bottled in Mexico with cane sugar vs. corn syrup.  I consider myself a connoisseur of Coca Cola and I think the Mexican Coke had brighter taste, not as heavy as the corn syrup. 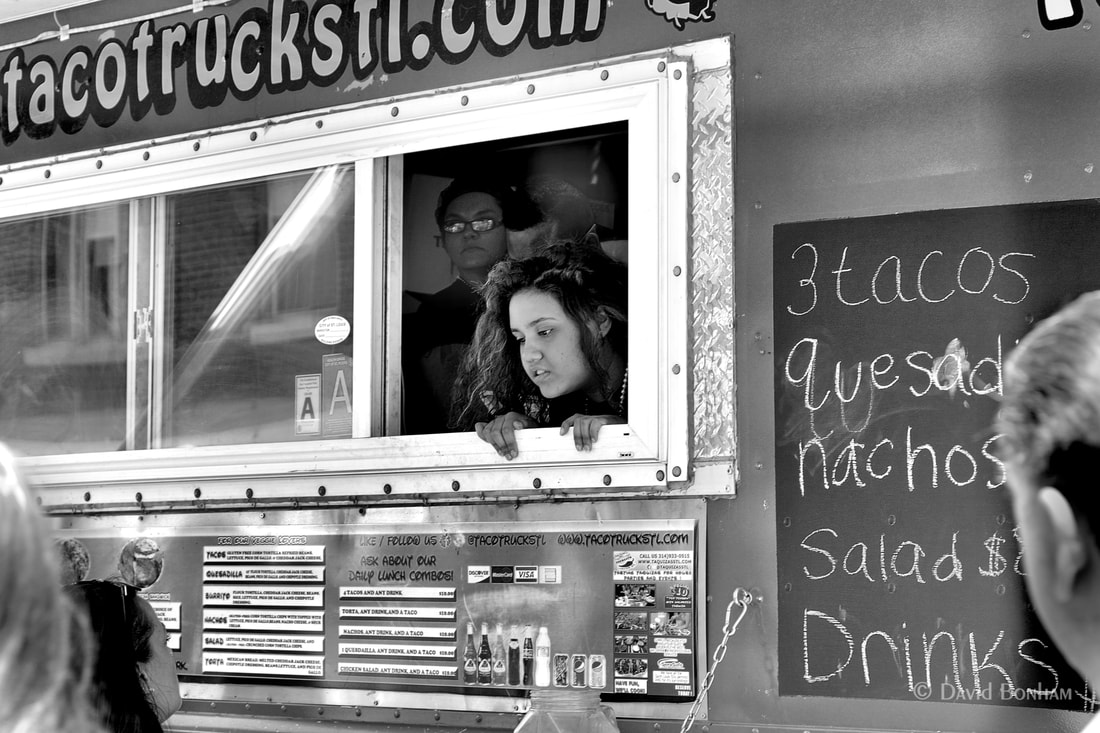 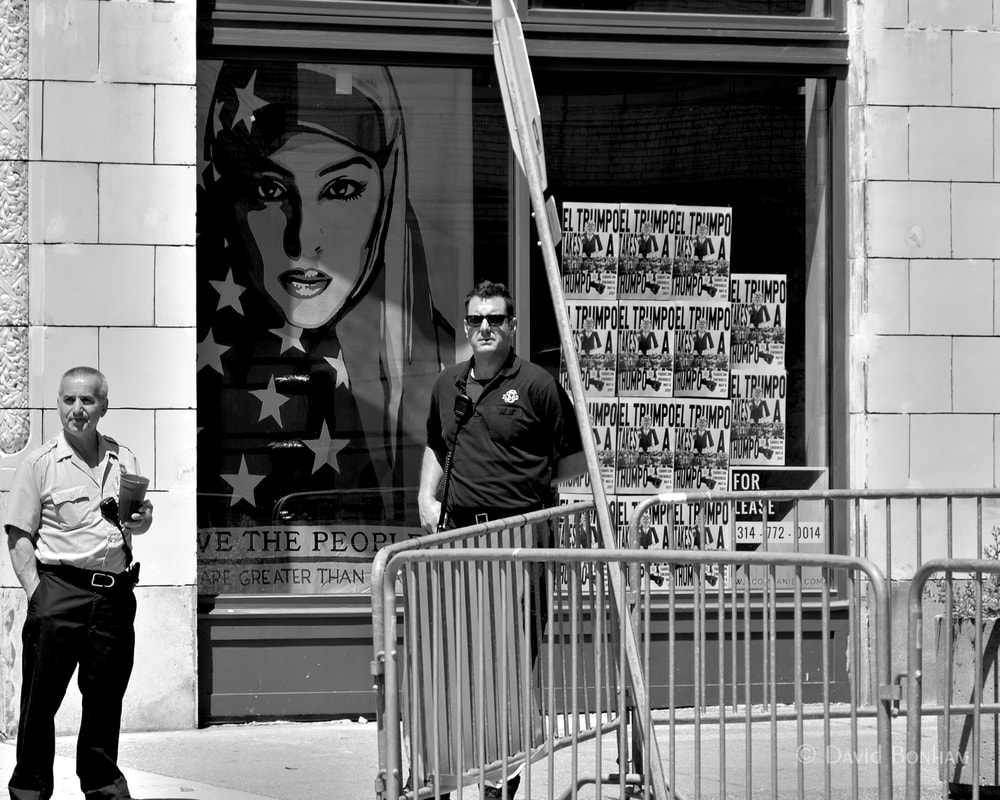 I’ve been to Cherokee Street several times outside of Cinco de Mayo and it was only this time that I realized what this graffiti is about.  At least partially.  The man is Lyndon Johnson, 36th president of the US who escalated America’s involvement in the Vietnam war.  On the far left is what I assume is a hawk representing those who were in favor of increasing our involvement with escalation of our offensive actions in and around Vietnam.

At first I thought the smaller birds were doves (anti war) but on the far right they appear to be dropping bombs.  Next to the LBJ head on the far right is a B-52 bomber (one of our most potent weapons at the time) riding on the wings of a hawk.  The # symbol in the talk buble by the hawk and the @ symbol in the LBJ thought bubble are both anachronistic to the time so I don’t get their meanings and the meaning behind the rest of the imagery escapes me too.  If you have any ideas I’d be glad to hear them. 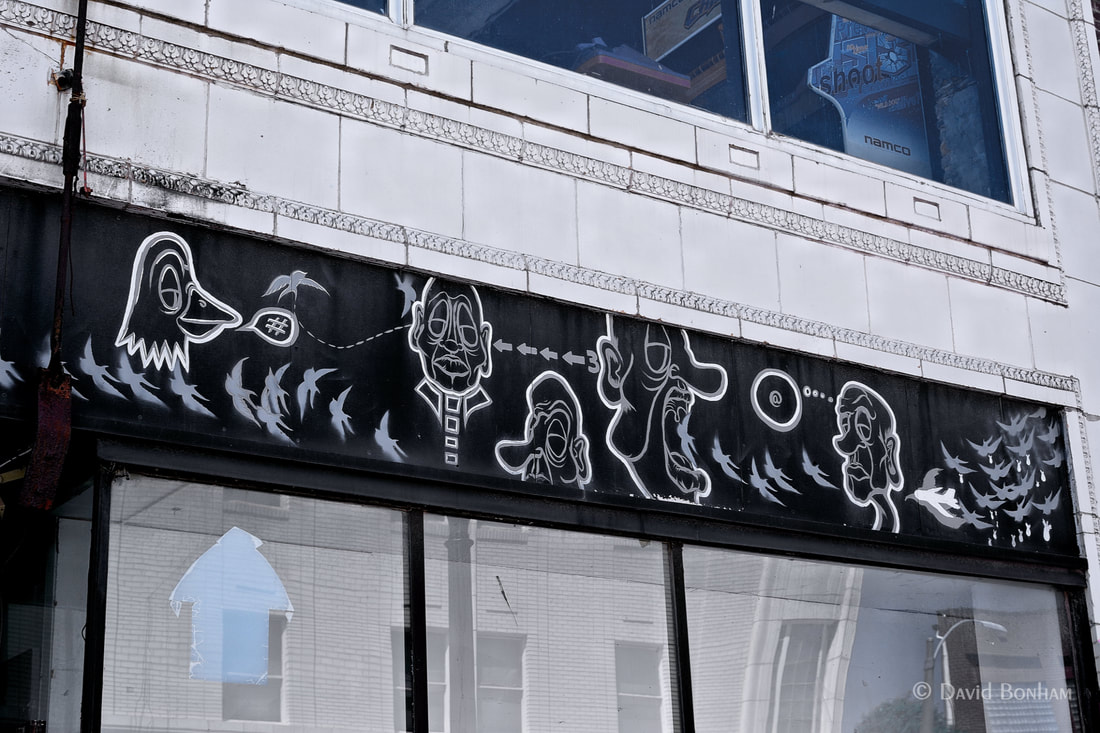 I like this photo because the lady in the center slightly reminds me of the iconic still images from the movie The Seven Year Itch.  In those photos Marilyn Monroe is wearing a white dress and is shown trying to hold it down while gusts from the subway vent she is standing on blow it up.  This lady does not look like Marilyn Monroe and her dress (except for being white) is not at all similar to the dress Monroe was wearing.  But still for some reason it make me think of that scene in the movie.  The mind is very strange at times.  And no, I did not line up this shop to give her Mickey Mouse ears or a headdress. 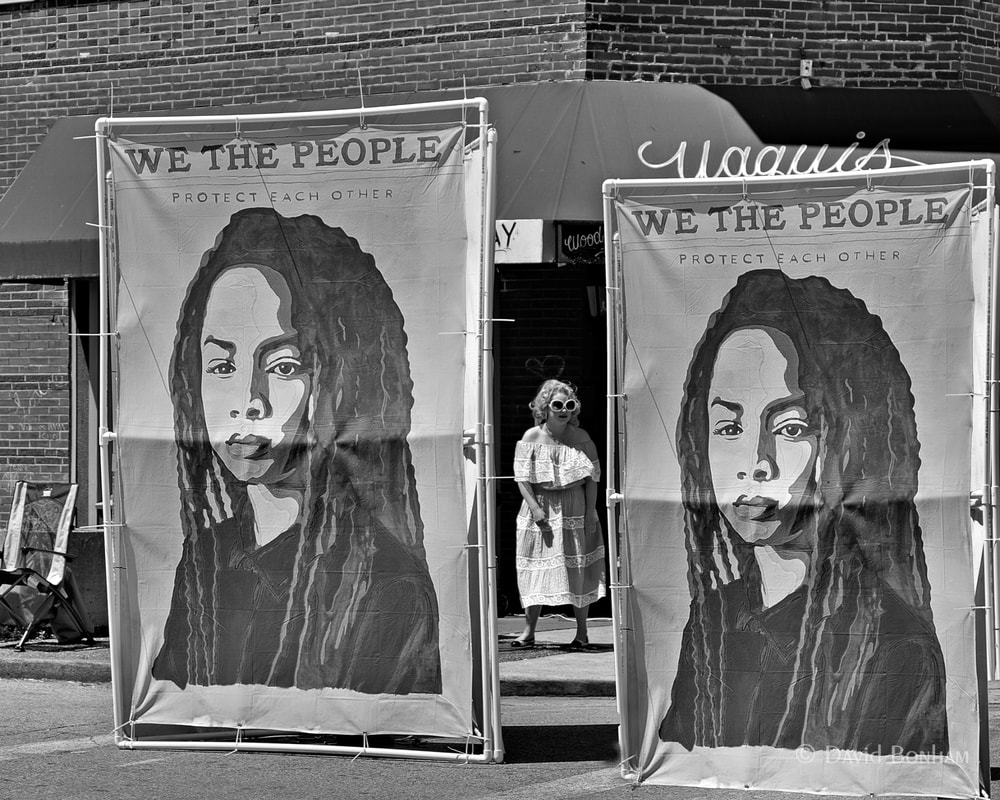 Tell you what.  You guys have been such a good audience I’m going to take a break so you can get back to important things.  I know my dryer buzzer just went off so I’ve got some socks to sort.  I’ll come back next week with some parade and post parade photos.