At merriam-webster.com they define hodgepodge as “a heterogeneous mixture”.  The Cambridge Dictionary defines hodgepodge as “a confused mixture of different things.  The word heterogeneous is  little fancy for me but still I think I’ll go with that definition.  What I have here is a mixture of diverse photos.  They are mixed together because they were outliers from other photo sessions; not because I’m confused.

Often I am confused, but not about this.  I have to admit that I cannot identify some the insects and flowers in this post.  At my age that inability might be confused for confusion.  Do not confuse my inability to identify some insects and flowers for confusion.  What you are seeing is my display of ignorance.  I am using the term ignorance purely objectively; not in the subjective, derogatory sense.  If you are confused and think otherwise then (to put it bluntly) your confusion is showing your ignorance.  I need to stop this.

My first flower is one that I cannot identify for sure.  Some sort of canna maybe? 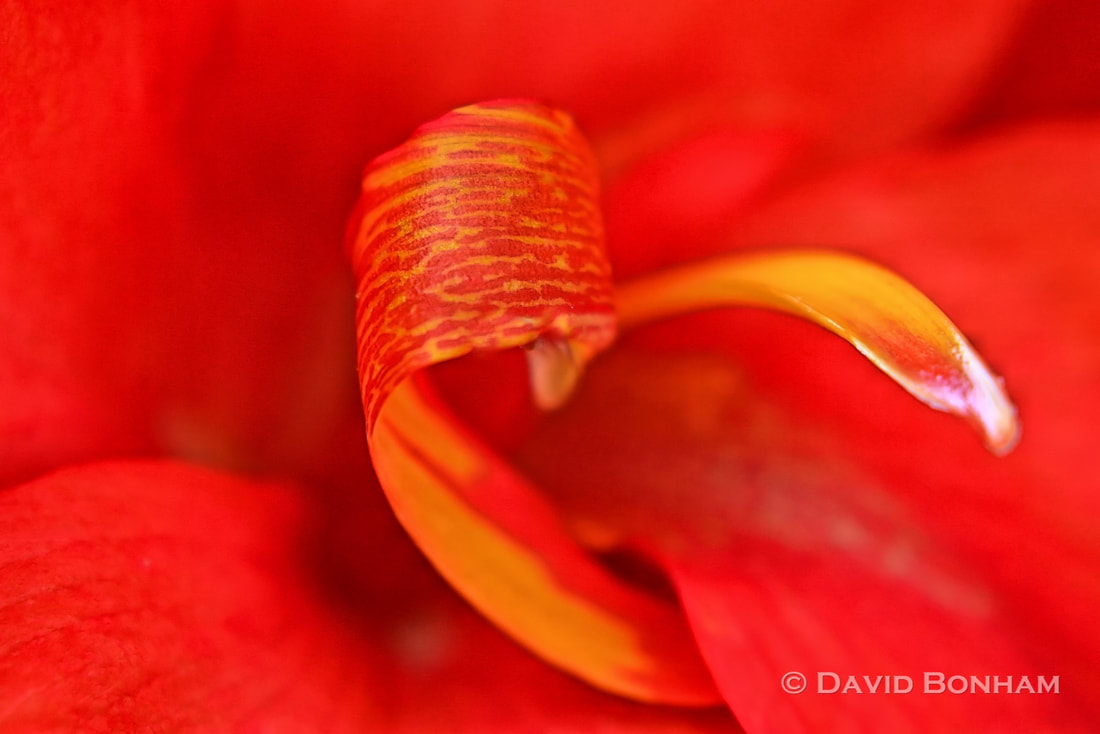 I just love shooting those ants and aphids . 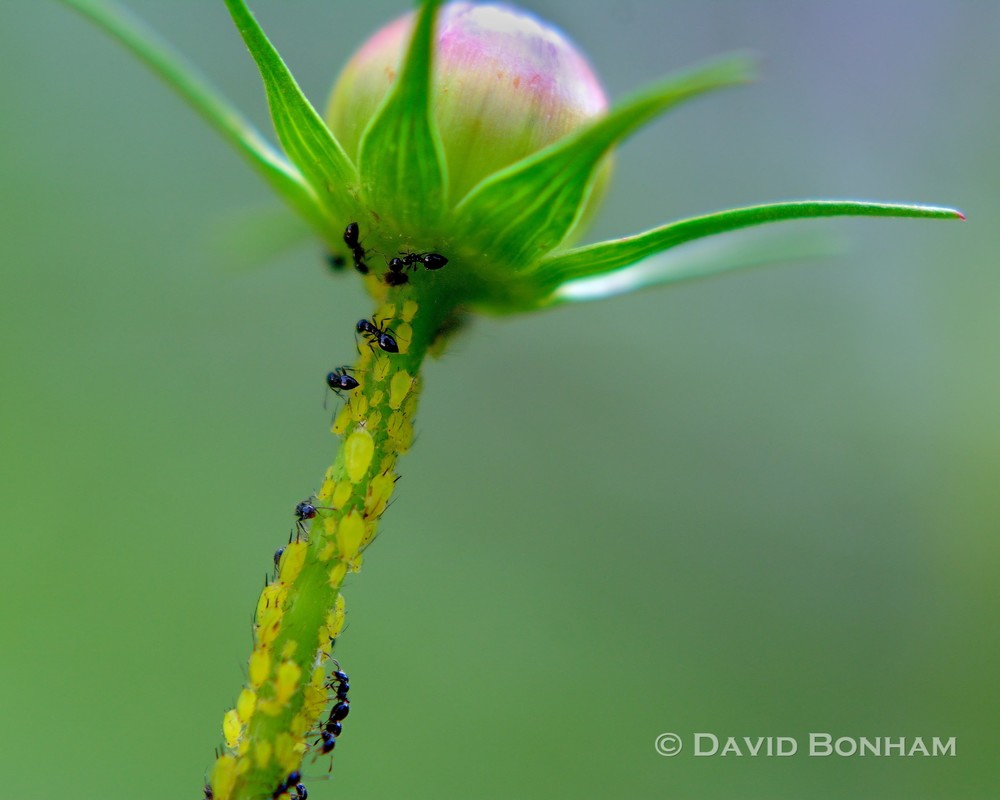 I did a lot of searching on the inner webs using the Google machine but could not come up with a good candidate for this insect.  It is very strange looking with kind of a mammal vibe going on.  It appeared very lethargic and I thought it might be dead and that thought kind of scared me.  At times I’m quite lethargic so I would hope that no one would see me in a lethargic state and promptly get out that big, heavy-duty, black trash bag with the zipper down the middle.  Anyway, I wasn’t sure if he was dead or just hadn’t recovered from the night before. 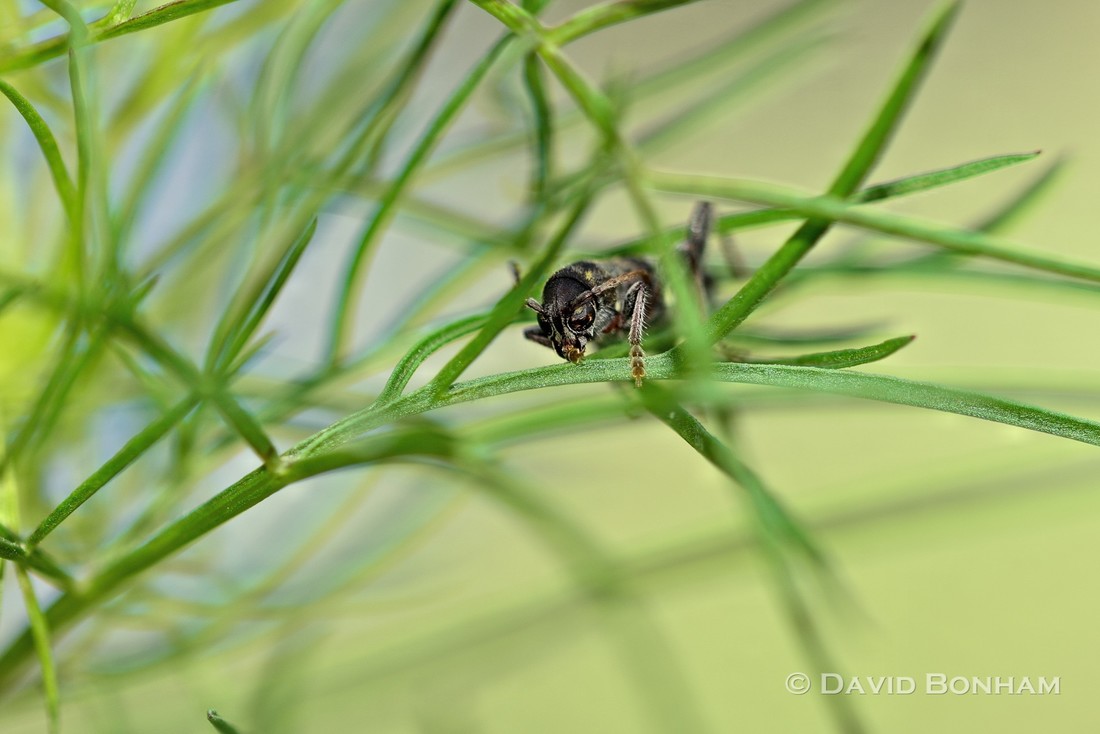 If anyone has ideas on what this insect might be please let me know.  Here’s a better picture of the body that might help with identification.  Unfortunately I don’t have a dorsal view.  (That’s biology talk for a shot of his back.)  I went in the house to get a 3x close up filter.  I figured a docile subject like this that didn’t mind me poking around would be ideal for a filter that would allow me get within inches of his mammalian face.  Yes – he was gone when I came back. 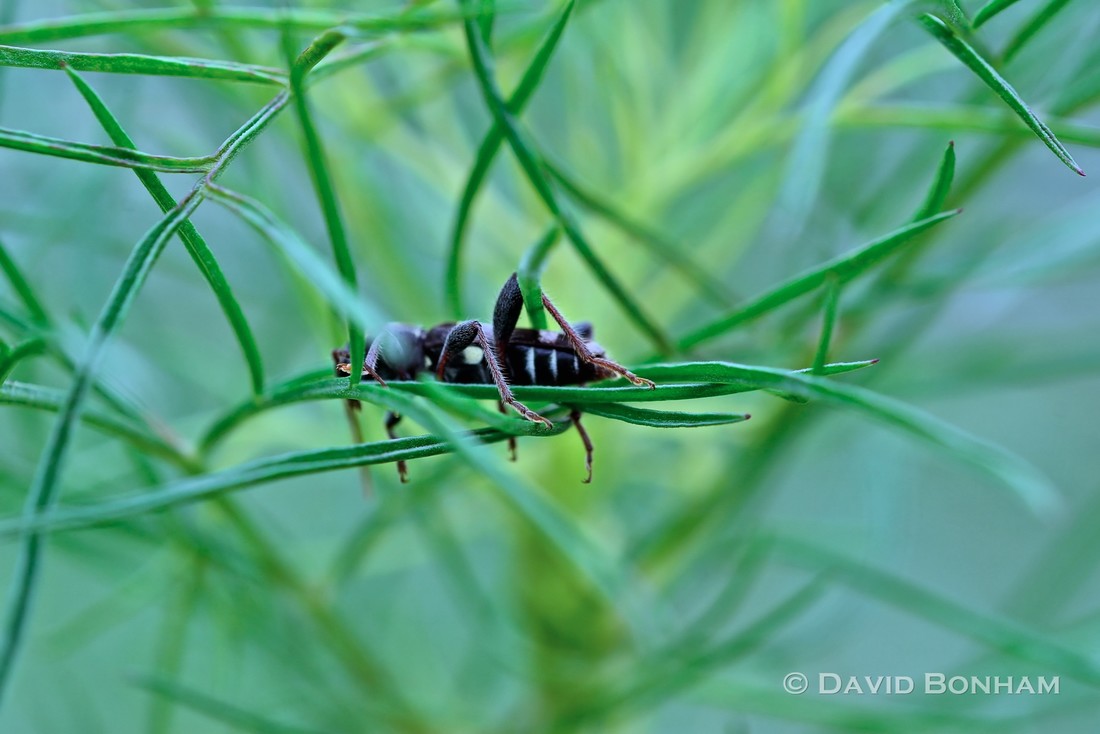 Another flower for which I know not the name.  It might be some sort of dahlia but that’s a lot more guessing than knowing. 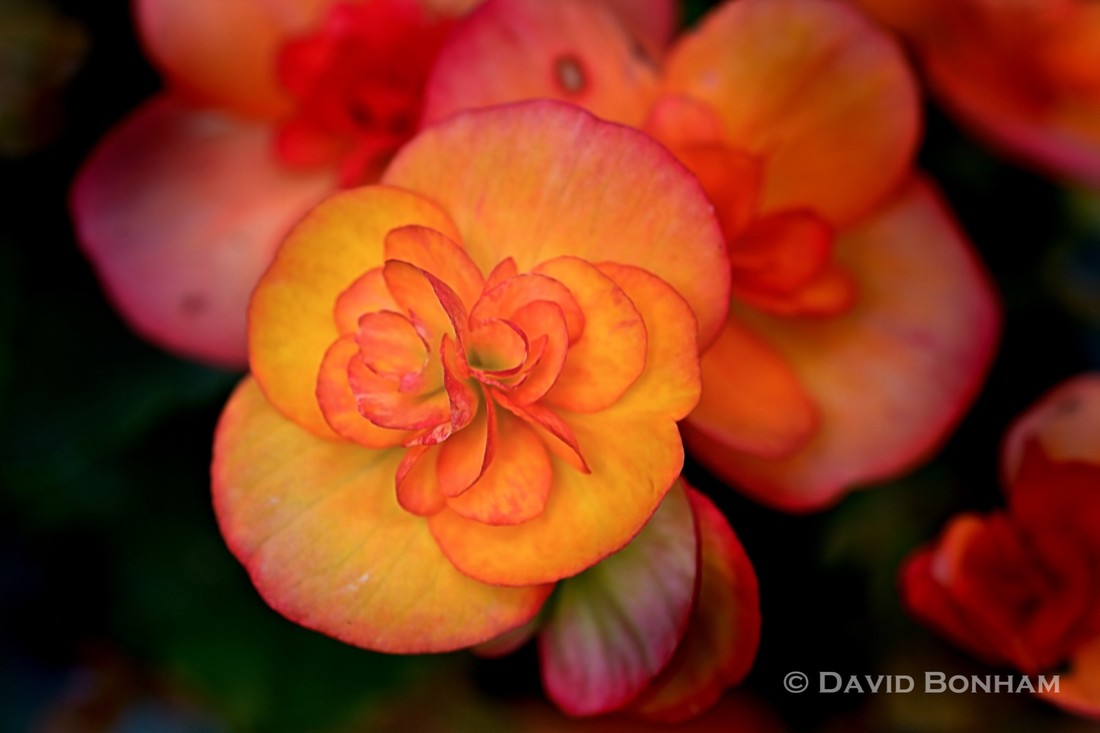 I would be willing to bet money, or even a box of Snickers bars, that this is a lantana. 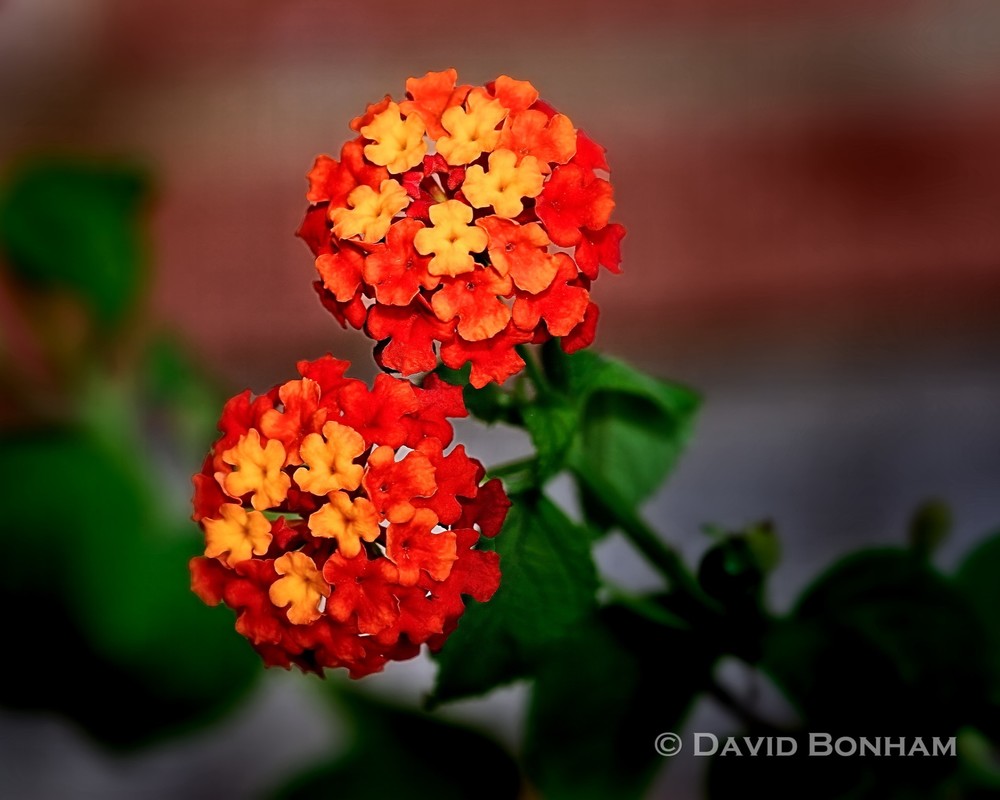 It looks like she is going to do what I too often had to do; take her work home with her.  Oh yeah, that’s what she’s supposed to do.  While I’m on a role with flower identification, she’s on a rudbeckia. 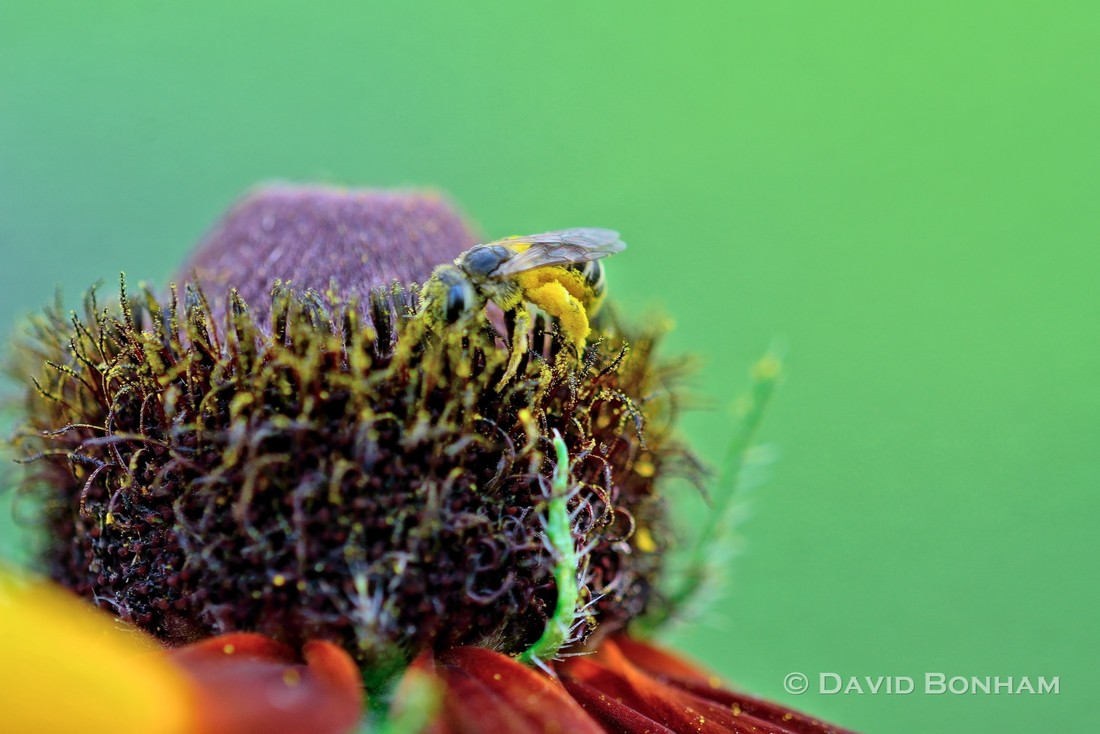 Below is a proud cosmos bud stretching out against a yellow green background and I have no idea of where that background came from.  Yes, I did end my sentence with a preposition.  I don’t feel so bad about that anymore because according to Bill Bryson in his book The Mother Tongue, the rule of not ending a sentence with a preposition is basically a bunch of horse feathers.

According to Bill (one may call an author by their first name if one has read at least one of the author’s books a minimum of three times and I am on my fourth reading of The Mother Tongue) Robert Lowth,  a clergyman and amateur grammerian in the 1700s, published a book in 1762 titled A Short Introduction to English Grammar which, in Bill’s words “… enjoyed a long and distressingly influential life in both his native England and abroad”.  Bill points out that Lowth never declared it a rule not to end a sentence with a preposition.  Instead, to quote Bill speaking about Lowth:

“He [Lowth] recognized that ending a sentence with a preposition was idiomatic and common in both speech and informed writing.  He suggested only that he thought it generally better and more graceful, not crucial, to place the preposition before its relative ‘in solemn and elevated’ writing.”

So I happily no longer worry about ending a sentence with a preposition.  However, I do see Mr. Lowth’s point about it being “more graceful”, at least sometimes.  For example, if John Donne (who lived a couple of centuries before Lowth) had not taken a “more graceful” approach when writing Devotions Upon Emergent Occasions, “Meditation XVII”, Hemingway’s book title might have been Who Do The Bells Toll For and I much prefer the existing title.

Bill goes on to point out that “within a hundred years Lowth’s remarks on prepositions had been converted from a piece of questionable advice into an immutable rule”.  A couple of the other nonsense rules Bill blames on Robert Lowth are the notion that you must say different from rather than different to or different than, also, again to quote Bill:

“the clearly nonsensical belief that between can apply only to two things and among to more than two.  (By this reasoning, it would not be possible to say that St. Louis is between New York, Los Angeles, and Chicago, but rather that it is among them, which would impart quite a different sense.)” 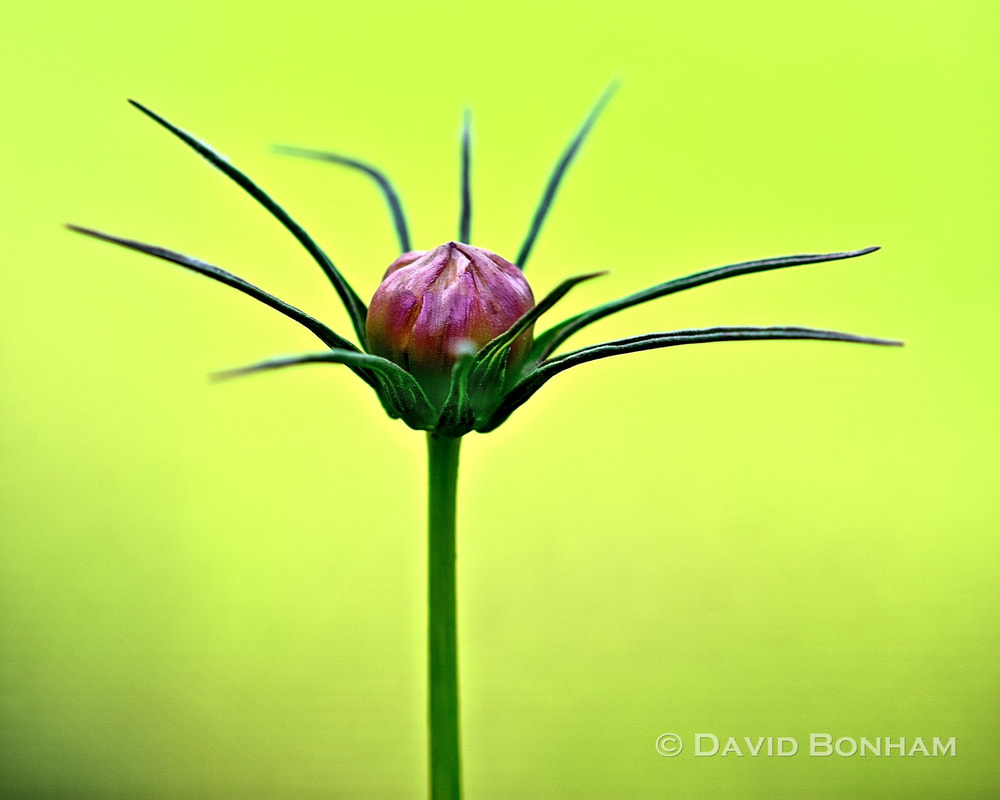 Look, I don’t want to be a nag about this, but once again I would like to stress the importance of proper hydration. 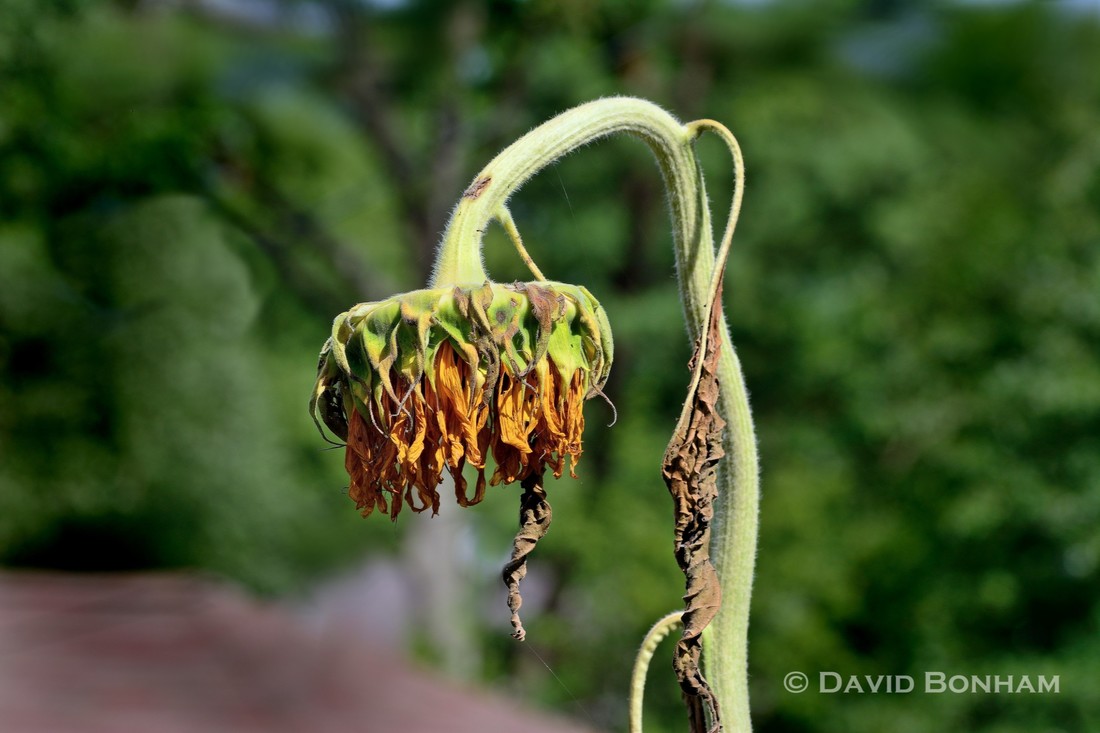 As always thank you very much for taking the time to read an or look at the pictures in my blog.

I love the English language.  Admittedly it is the only language I know (except for Pig Latin) so I guess I am probably biased.  If you love the language too and are interested in some very interesting facts about it, I highly recommend Bill’s book:  The Mother Tongue:  English and How It Got That Way.  I checked Amazon and it has both the hard copy and paperback, and new and used.

William, a young man from a dirt poor, rice farming family in the bootheel of Missouri, managed to get a full ride academic scholarship to Harvard (yes the Harvard) University.  His hard work and studying really paid off but he was truly the country mouse in the big city.

On his first day on campus he was having a bit a of a problem finding the library.  Seeing a couple of upperclassmen walking by William asked, “Can one of you tell me where the library’s at?”

One of the upperclassmen looked at William with a smirk and said, ” You must be one of those charity cases our school takes in to show our diversity and egalitarian attitude when we need a good press release.”  Rather haughtily the upperclassman went on to say “You obviously did not come from one of our better prep schools or you would know that a Harvard man never ends a sentence with a preposition.”

William thought for a moment and then said,  “Excuse me.  Can you tell me where the library’s at, asshole?”