I apologize for the fish digression but sometimes things just pop into my head and I am compelled to get them out.

The first set of mushroom photos feature parasol mushrooms from my front yard.  I’ve shown this type of mushroom before but in past years they were all growing within a few feet of a ground level, rotting tree stump.  These mushroom were growing on the opposite side of the yard nowhere near any decaying wood.  I don’t know if that means anything but I thought I’d just throw it out there for you to chew on, so to speak.

These mushrooms start out with globe or oblong shapes growing on a stem. They are almost like a globe shaped water tower or, if you have trouble thinking big, like a golf ball on a tee.  As they mature the bottom portion of the globe separates from the stem and gradually unfolds as a cap that looks like … yes, a parasol.  In the photo below that collar on the stem  just below the cap is where the cap was attached to the stem.

As I recall from when I first researched parasol mushrooms some species of the parasol are poisonous.  There is a problem in that it is very hard to tell the difference between the poisonous parasols and the safe ones.  Since I’ll never eat any that fact does not bother me or cause me to want to do more research to become proficient in identifying the safe ones.  Now, if you were to tell me there is a new variety of Snickers bar that is poisonous and it is hard to tell from the original safe one, I’d be researching ’til the cows come home.  I mean I’d have photo  flash cards for the good and the bad, from all angles, and with and without the wrapper. 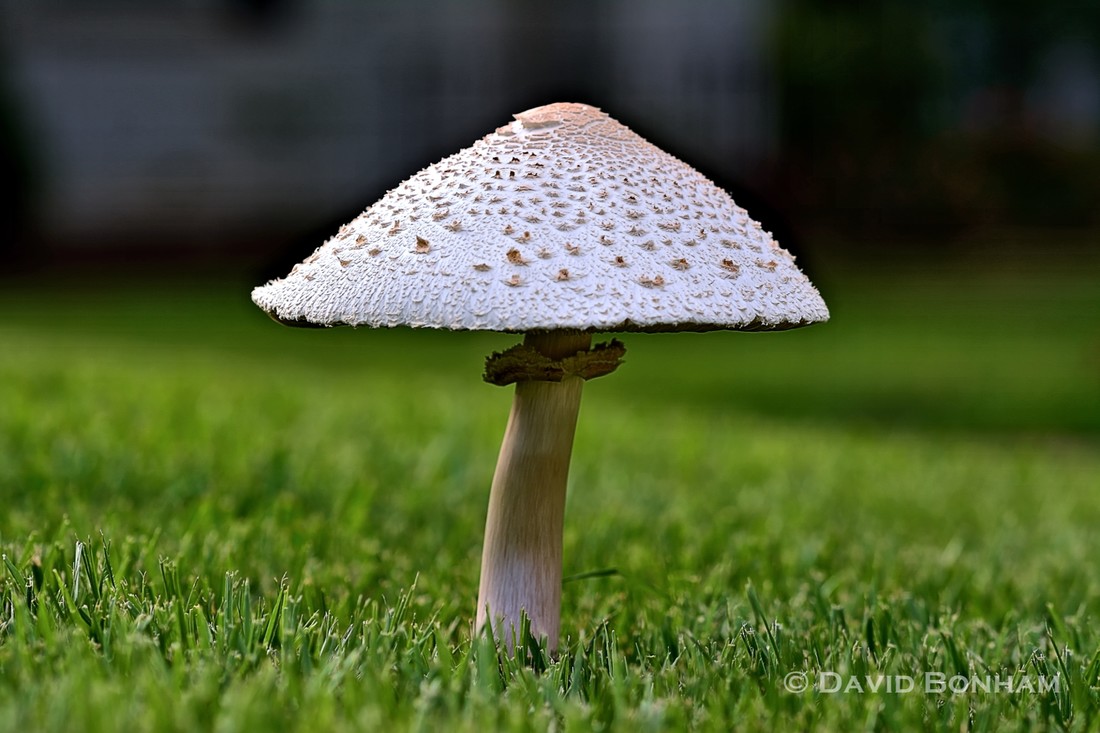 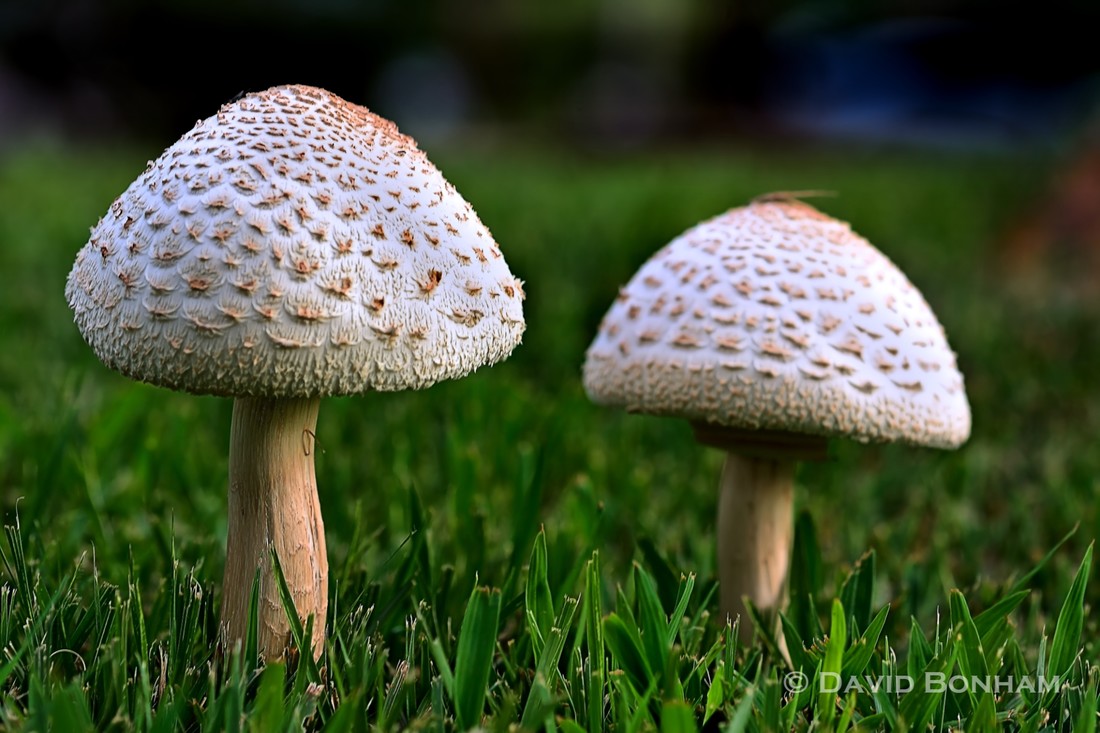 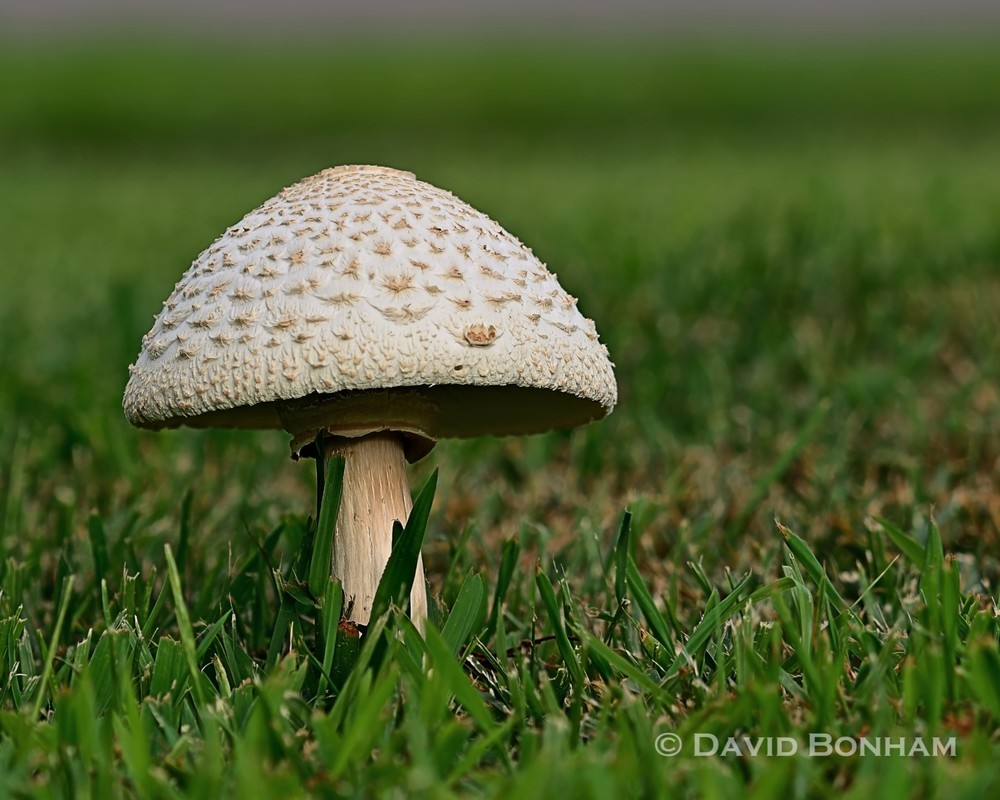 I was late coming to this year’s mushroom party so I didn’t get any photos of them in their early stage with the caps still attached except for the small one here on the far right.  Even so it appears it may have very recently begun to detach from the stem. 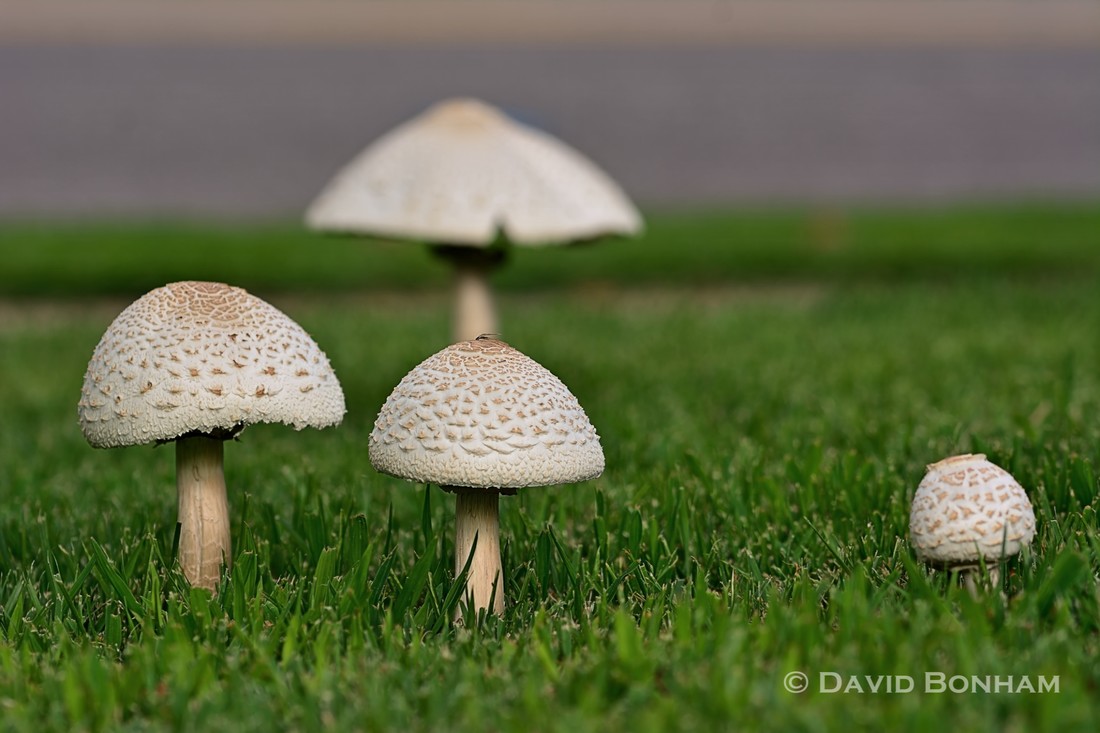 I have no idea what type of mushrooms these are in the next four photos.  I thought I had photographed this type before and identified them but could not find the photos.  If anyone knows I’d appreciate hearing from you. 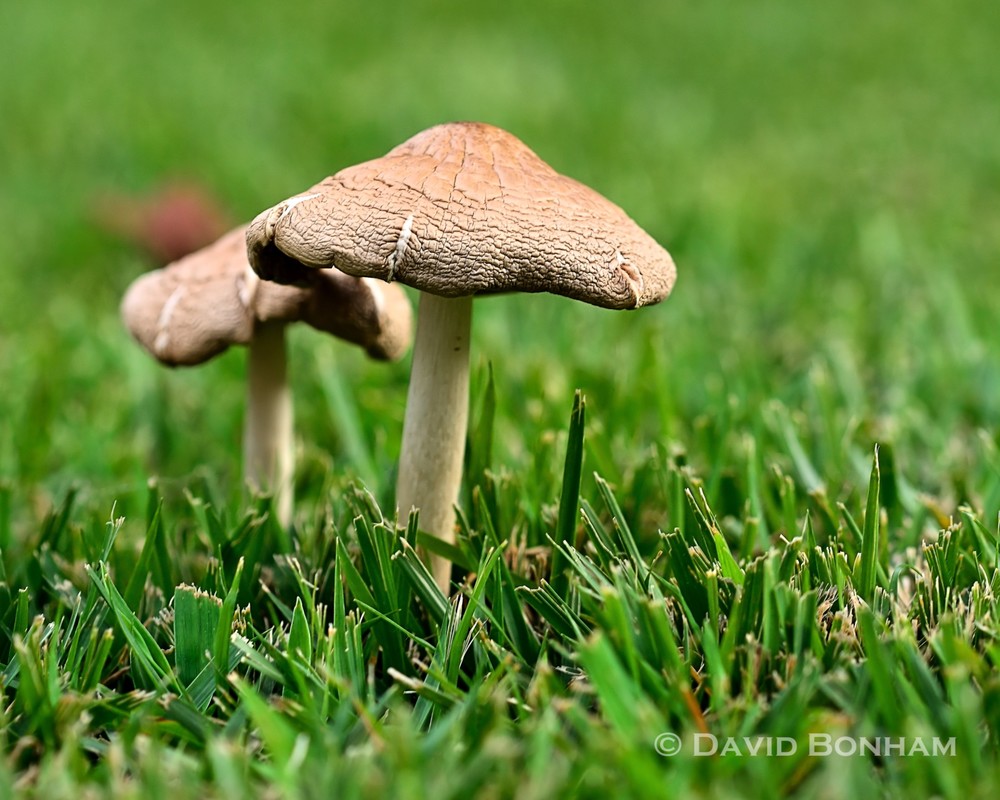 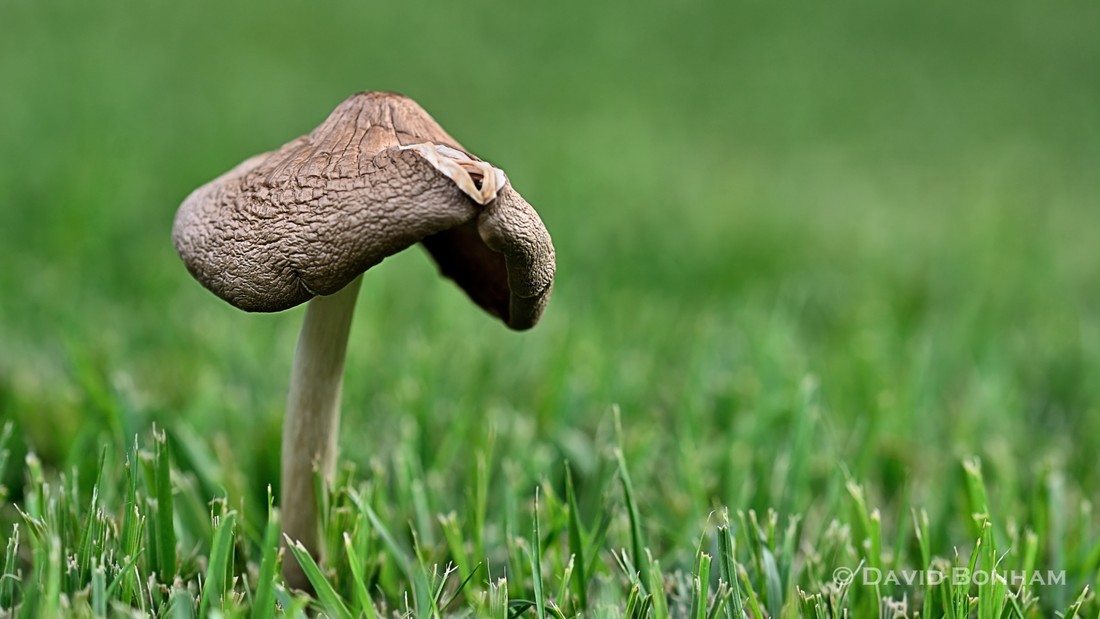 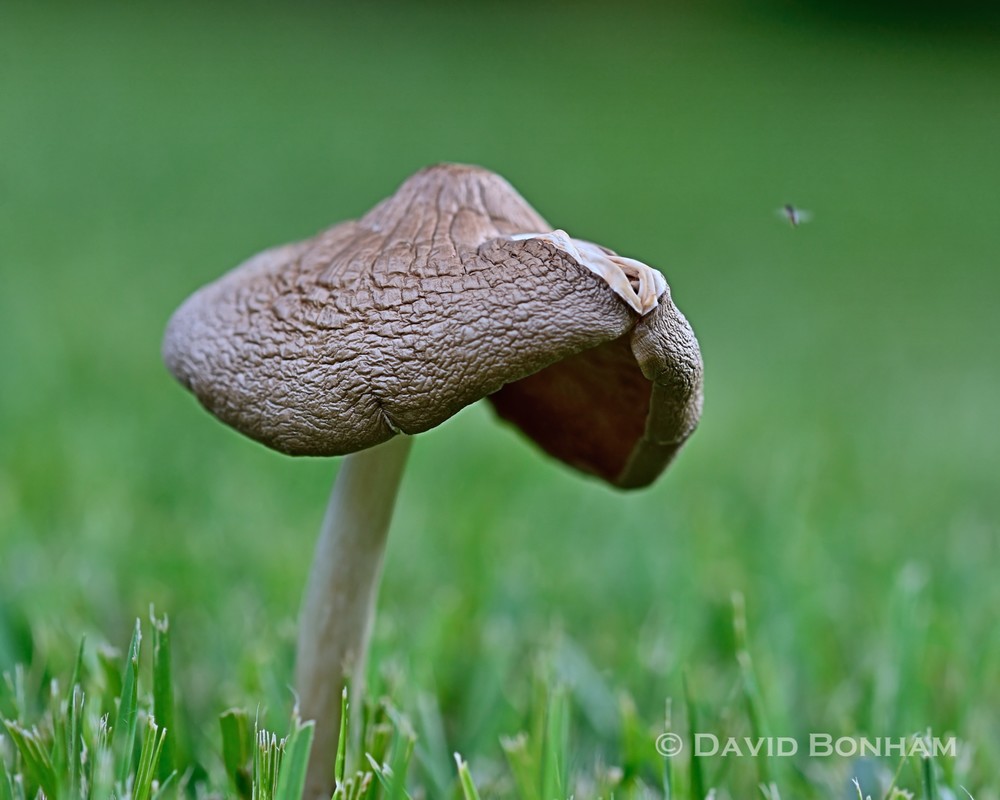 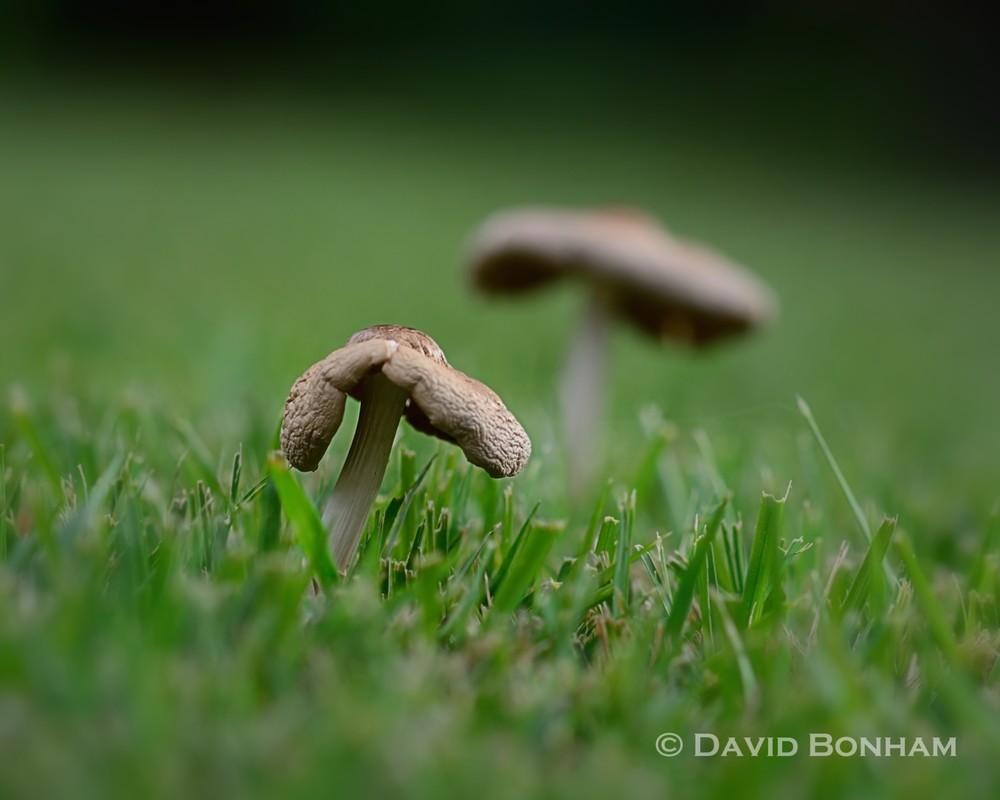 Back to the parasols, but now a few days later.  Once the caps look like they are trying to turn themselves inside out and the mushrooms begin to take on the appearance of a bird bath, then you know they are in their next to last stage of life.  The last stage is when they turn dark brown and shrivel into a gooey glob.  Note I used flash for this photo which, past a certain point, turns the background black. 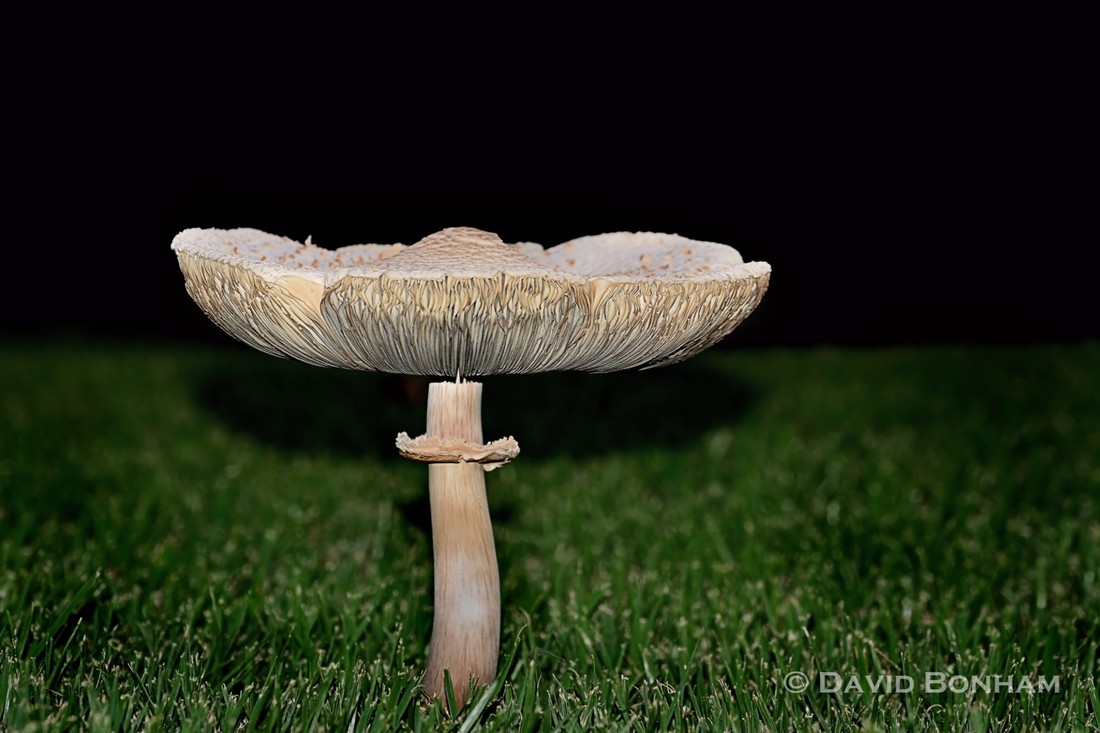 On the left side of the photo below you will see a mushroom cloud.  Ouch!  I heard your groans all the way over here. 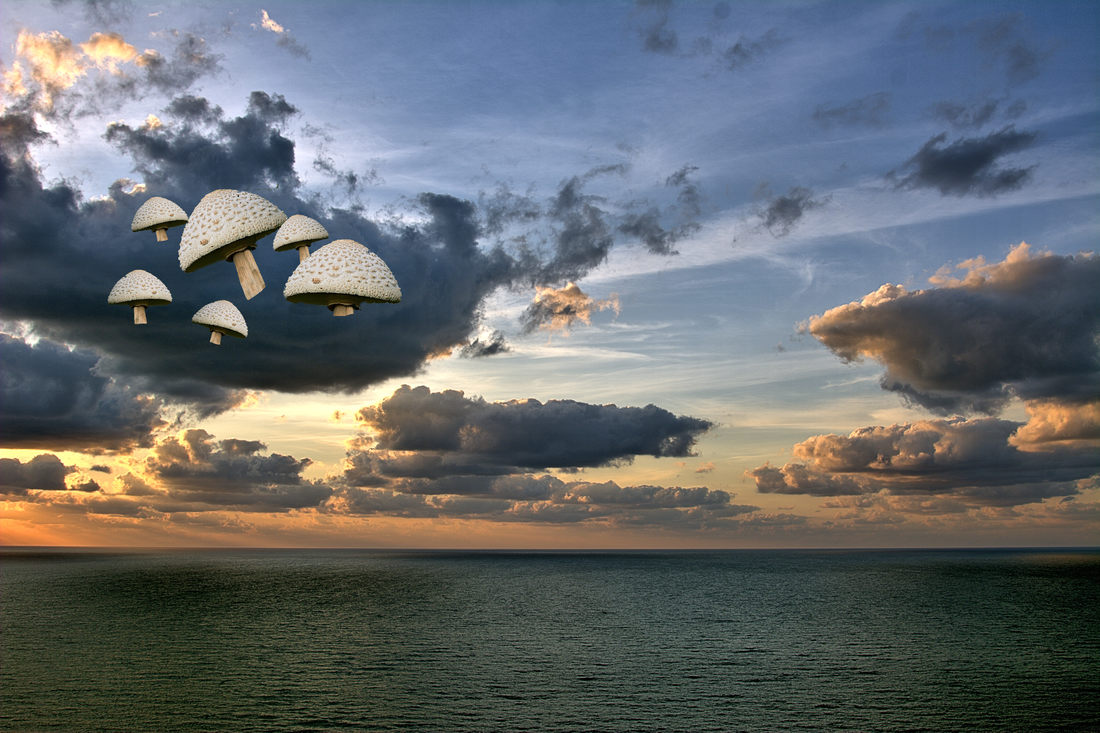 This is a rare, vintage psychedelic mushroom.  I water it with a proprietary Kool-Aid mixture and mulch it with a special blend of cut grass that seems to be weed as much as grass. 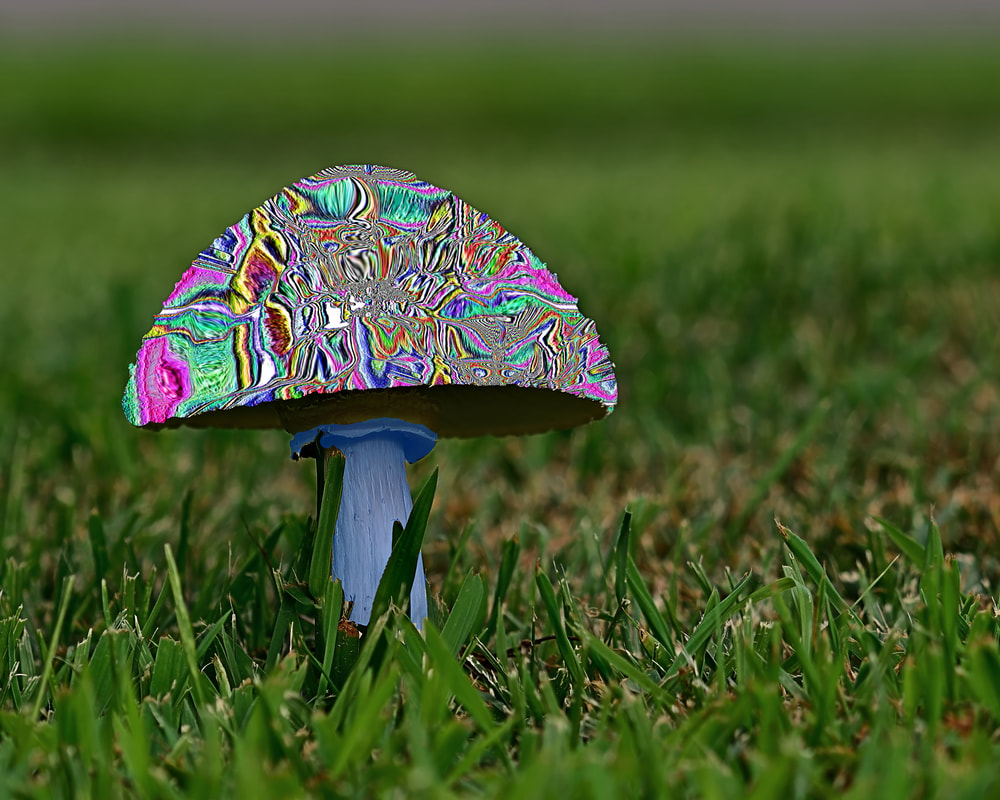 One final note.  Let this be a reminder of the importance of hydration. 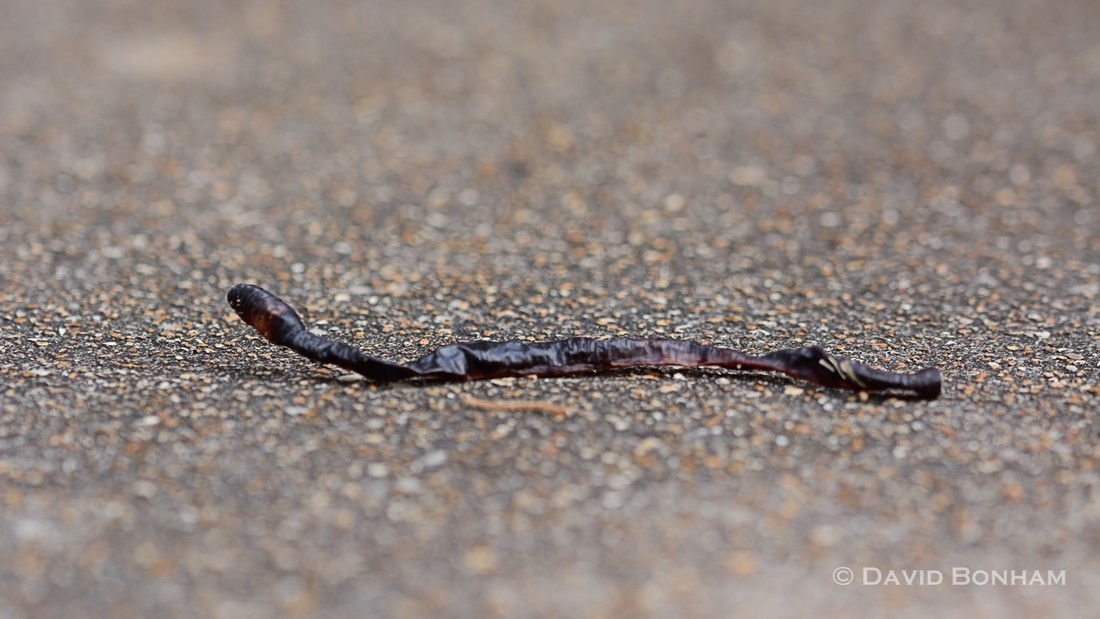 I hope the readers of this blog appreciate the lengths I go to and the hardships I endure to bring cutting edge photography to the blog.   For all the photos in this post I had to get down flat on my stomach.  Actually that’s not that big a deal, but getting up – a big deal.