My wife and I went to Nashville with another couple for a weekend.  We went because the ladies wanted to go see (I forget her name) a religious lady speak , we all wanted to see our friends’ daughter and family who now live in Nashville, and it was something different to do.  We got there early on a Friday afternoon and, other than the speaking engagement that night and the family visit the next day, we didn’t have any plans.  To kill some time we decided to go to the Ryman Auditorium, the original home of the Grand ole Opry.

Following is a very brief summary of some info on the Grand ole Opry taken from Wikipedia.

The Grand ole Opry began as a weekly radio show in 1925 and features primarily country, bluegrass, folk and Americana music.  Over the years the show grew in importance with regard to country music to the point that the city of Nashville is now considered America’s country music capital.   Originally the show was broadcast from the Ryman Auditorium.  In the early 1970s the Grand ole Opry moved from the Ryman to a new much bigger complex several miles to the east.  (If you’re ever in Nashville and looking for something to do, I’d recommend a tour of the Ryman. )

We found a lot to park our cars (we went down in two because our friends were going to stay with family a couple of days longer than us) just a block away from the Ryman Auditorium.  We went to the wrong entrance so had to walk around the block to the correct entrance.

These building photos were taken while walking around to the entrance.

Due to its size and unique twin tower design the AT&T building tends to dominate the Nashville skyline. 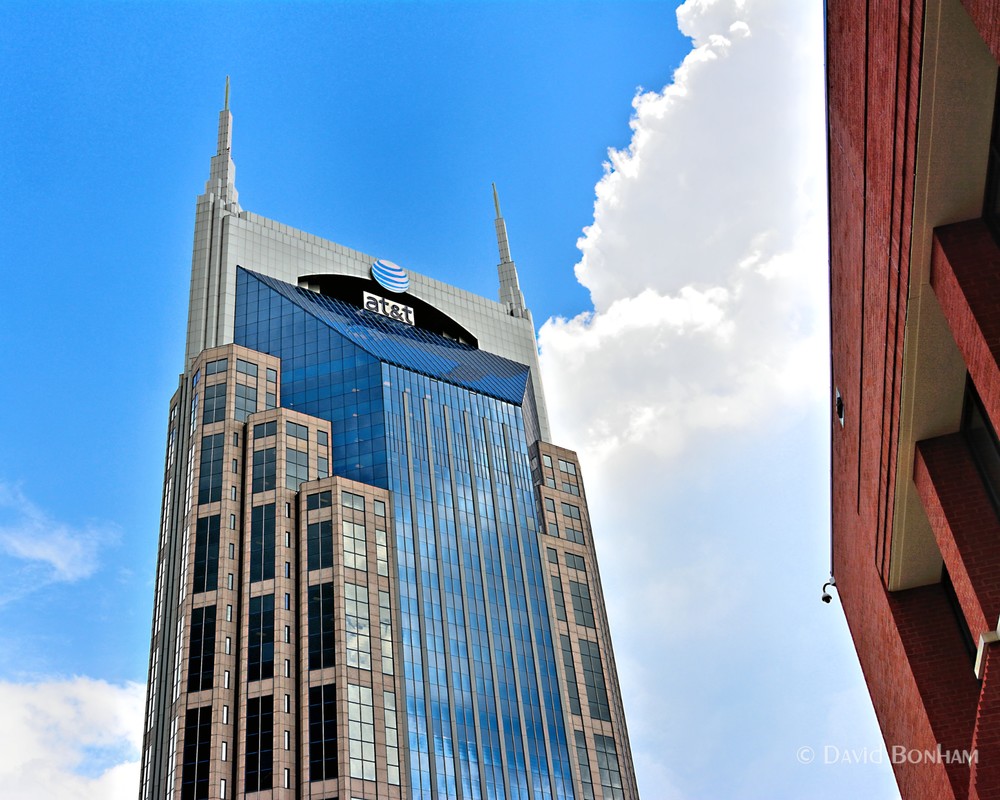 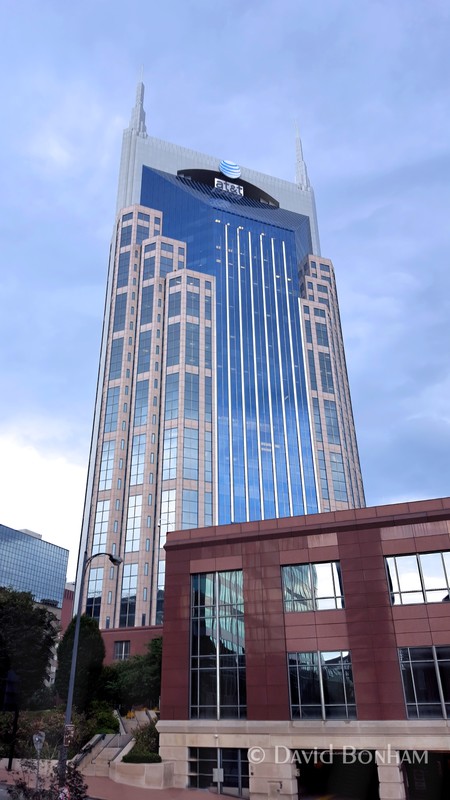 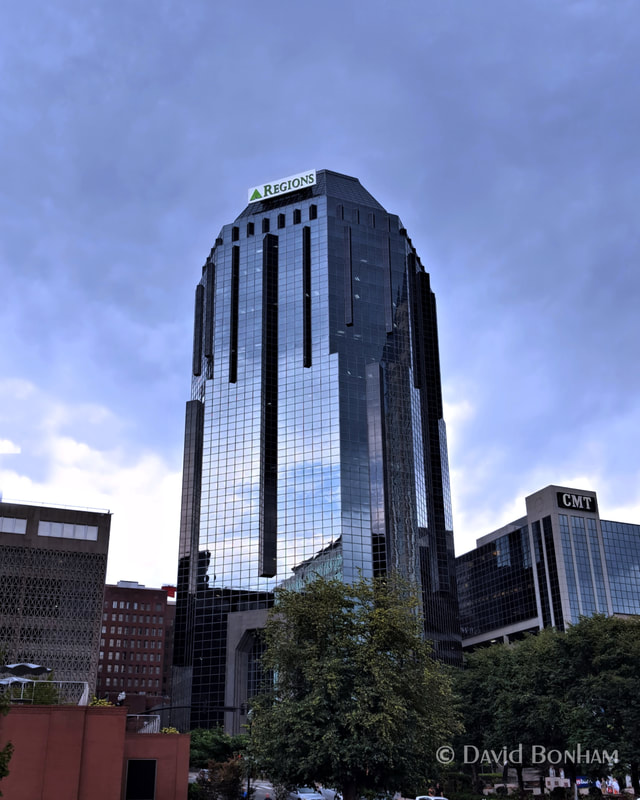 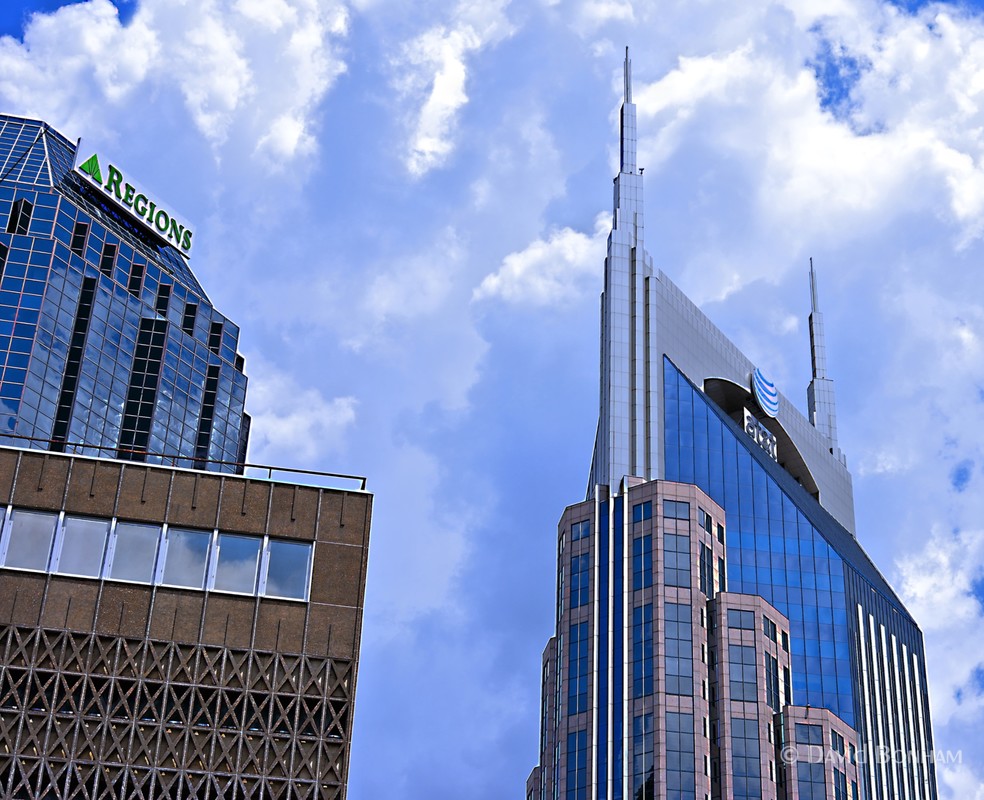 So we’ve walked around the block, I took shots of some of the nearby buildings, and now we are in the Ryman Auditorium.  Ryman Auditorium started out as a church and some remnants of that are still present.  Most obviously in its windows.  Inside the actual seating area of the auditorium you’ll see large, stained glass, skinny, oblong shaped windows top in an arch.  As far as stained glass windows go they are pretty minimalist.  The windows are divided into three equally sized sections one on top of the other with each section being a different color.  It’s as if someone took some different colors of plastic wrap and taped a different color to the window, one over the other.  I took pictures but due to my lack of imagination in composing the pictures, and the makers lack of imagination in designing the windows, the photos were pretty boring and I deleted them while still in the camera.

The windows below are not the ones I was describing although the do top off with a pointed arch.  We left the seating area down the side stairs (versus the main wide stair way we came in on).  The side stairway was more of a fire escape type stairway, purely functional.  However at a landing there were these short windows at floor level.  They caught my attention because their design was so out of place for the stairway.  I have to confess that the light through the windows in the original photos was a boring washed out plain sky.  I tried to make it a little less blah in processing both windows.  I may have gone a bit too far with the second photo but I prefer it even knowing that its added and not what was there. 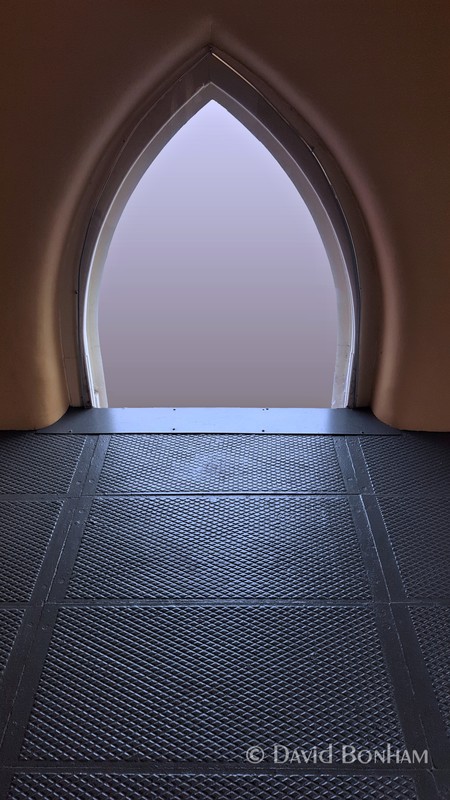 I may have gone a bit too far with this second photo but I prefer it even knowing that it’s my addition and not what was there. 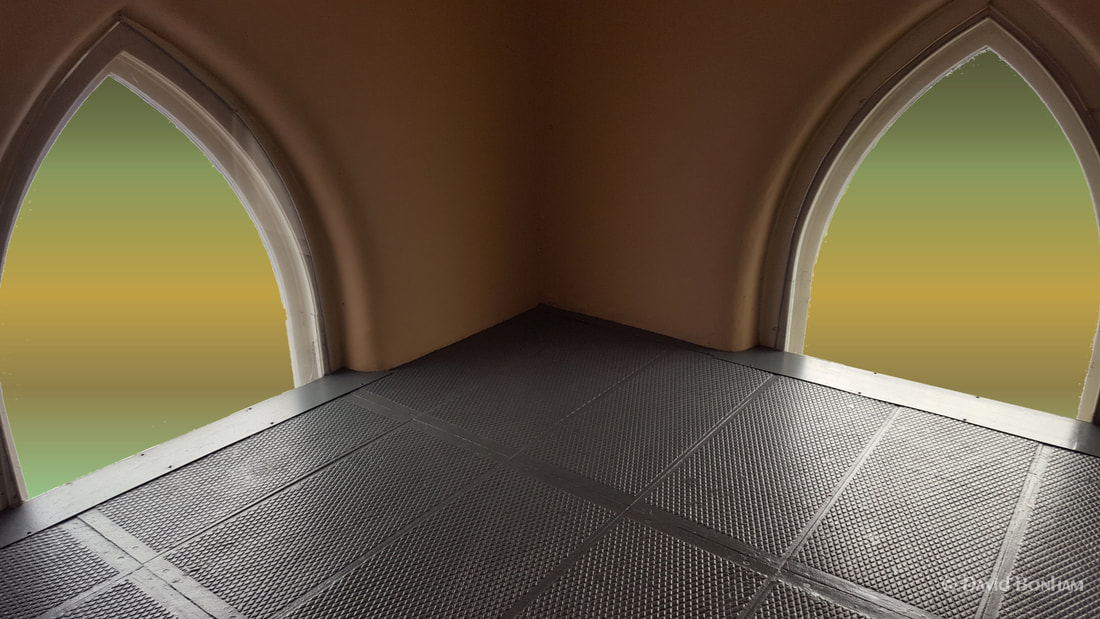 All photos taken with a Samsung Galaxy S6 phone.